Silver was the very first metal used as currency in Ancient Greece 4,000 years ago. However, for retirement portfolios – including IRAs and 401(k)s – silver offers much more than its record as one of the world’s great currencies.

But these are the not the only reasons retirement savers should consider silver in their portfolios. Here are 3 more:

Many savers instinctively believe silver is less valuable than gold in a savings portfolio. However, silver has been known to deliver even greater returns than gold. 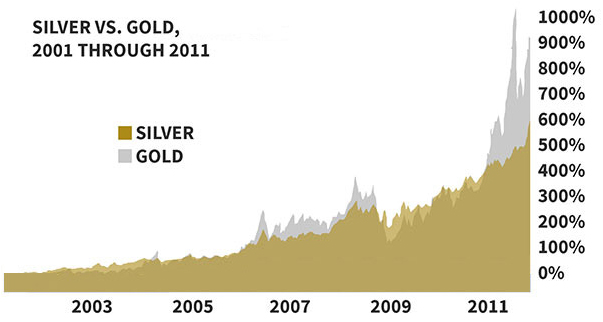 DEMAND FOR SILVER IS GROWING

Growing silver demand around the world is driven chiefly by its near-irreplaceability as a key component in many products, and there’s no end in sight.

Industrial demand for silver accounts for about half of its global market:

A middle class is emerging in developing nations such as China and India. As greater numbers of citizens can afford products using silver, demand will likely grow.

Silver also is a central component of many 21st century green technologies, such as solar energy.

This growing worldwide industrial demand for silver to support life’s necessities means it can be a useful asset no matter what’s happening in the economy.

The gold-to-silver ratio measures the ounces of silver one ounce of gold could buy. Experts say the higher the ratio, the greater the likelihood silver’s price is below its true value.

The chart below illustrates two periods – mid-2003 to early 2008 and late 2008 to early 2011 – when the gold-to-silver ratio approached 80 and then subsequently dropped significantly. In each of these cases, when silver fell from what was regarded then as a lofty perch as measured by the g/s ratio, the metal’s price around those periods jumped well over 300%. The ratio subsequently rose again as far as 100 — the highest it's ever been.

The ratio generally has risen since 2011, which means silver still has the capacity to provide a healthy margin for potential growth. There's still time to buy! 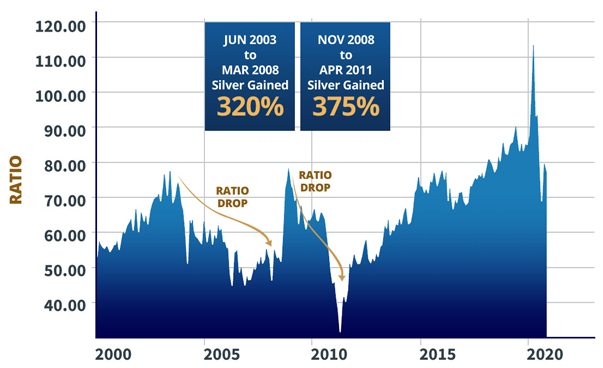 CALL AUGUSTA TO LEARN MORE ABOUT THE SILVER ADVANTAGE

Augusta educators and agents are highly knowledgeable about this very special metal, including all the factors that may have influenced its price performance. Learn more about silver and how easy it is to add it to your portfolio! Contact Augusta Precious Metals at 800-700-1008.