The popularity of physical gold and silver as savings assets is in large part due to their diversifying characteristics during economic turmoil. There have been times when precious metals prices have risen sharply after big socioeconomic or political changes in the world.

What follows is an overview of two notable periods in American history that illustrate precious metals’ power to triumph during economic misery: the tumultuous decade of the 1970s and the years of the 2008 Great Recession.

The striking performances posted by precious metals during these two of the nation’s most profound economic downturns deserve the attention of savers who are evaluating how best to diversify their IRAs, 401(k)s and other retirement accounts to hedge against future periods of economic stress.

Those who remember the 1970s will recall the decade as being one of significant economic distress in the United States. The unemployment rate climbed to nearly 10%, and by January 1980 inflation had reached a startling 14%.

Blame for this economic trouble fell to President Nixon, who took a number of controversial steps on “behalf” of the economy. Nixon was accused of forcing Federal Reserve Chairman Arthur Burns to keep interest rates artificially low in the run-up to the 1972 reelection campaign.

Experts suggest the high levels of inflation later in the decade were a direct result of this manipulation of the money supply. Wharton Professor Jeremy Siegel has referred to the decade as “the greatest failure of American macroeconomic policy in the postwar period.”

Although mainstream financial markets remained under pressure throughout much of the 1970s, gold and silver were a different story. Taking their cues from the troubled economy, gold climbed roughly 1,500% and silver shot up an astonishing 2,100%.

Memories of the 2008 financial crisis remain fresh for so many Americans. The “official” dates of the Great Recession in the U.S. run from December 2007 to June 2009. However, the consequences of the meltdown were in play for years afterward due to the global and prolonged nature of the contraction. A large number of American households were still struggling long after the “official” end date of the U.S. recession.

During this sharp economic downturn, precious metals prices rose very high, just as they did in the 1970s: gold climbed nearly 200%, and silver jumped almost 450%. 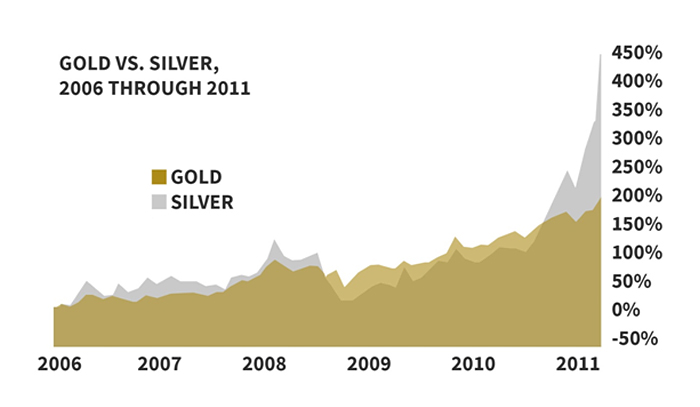 The Augusta Precious Metals education team is well-versed in gold and silver and their behavior during economic chaos. If you’re interested in learning more about incorporating gold and silver in your savings to help you diversify, call Augusta at 800-700-1008.