Bloomberg: Why Financial Markets Are Not the Economy

Because they have so much at stake, retirement savers should take great care to ensure they don’t confuse robust market performances with a healthy economy – and then make misled decisions based on that confusion. To be the best stewards of their hard-earned savings, savers must develop the ability to identify the revealing pieces of information that most accurately represent the condition of the real economy.

Sometimes the information you need as a retirement saver is readily available and paints a clear and accurate picture. In a recent article about overvalued markets, I encountered two charts that distinctly show financial markets and the economy are not always one and the same. I am sharing those charts in this piece with the hope you’ll recognize just how detached markets and economies can be from one another, so you can make decisions based on the truth instead.

Forewarned is forearmed – or it can be if action is taken based on the forewarning. This type of information is of great value to the retirement saver devoted to making certain his or her portfolio remains not only safe but productive during adverse conditions, and that’s why I’m focusing on it today. Including safe-haven assets such as gold and silver in your savings regime can go a long way to helping you protect your money and profit even when the economy is not as solid as it seems.

Here’s the danger: If you’re one who sees high-flying markets and concludes all is well, you might decide against taking the simple steps that can help secure your future. And that would be unfortunate, considering the wealth of existing information that confirms just how much the markets and the economy are presently at odds.

No Shortage of Data Indicating Markets Are Disconnected from Economy

It’s difficult to disagree with the idea that financial markets have reached the “euphoria” stage. Euphoria tends to be the last stage of a long-running bull cycle, and is fueled largely by a stubborn and irrational refusal to think the good times can’t possibly end. This time around, still-enthusiastic buyers of popular assets can point to some justification beyond mere unbridled optimism for their belief that markets will continue rising: The Federal Reserve remains open to lowering interest rates and even potentially acquiescing to the demands of a president who apparently wants to see markets surge higher heading into the 2020 election year.

A recent CNBC.com article suggested it was more than mere coincidence that a rise in the S&P 500 index of roughly 4% from mid-September through early November matched by nearly the same percentage an expansion in the Fed’s balance sheet over the same period. The same article excerpts a client note written by Societe Generale market analyst Albert Edwards in which he flatly declares, “The surge in equity markets has come on the back of the Fed hosing liquidity into the banking system via repos and T-Bill purchases.”

However, if all that’s left to fuel markets toward the end of a record-length bull market is interest rate manipulation, then prudent retirement savers would do well to be on guard.

On that note, I came across an article the other day by Bloomberg columnist Richard Breslow in which he expresses disbelief over not only the current valuation of markets but the fact that the entire country looks “to be rooting them [the markets] on.” Indeed, says Breslow, the recent robust performance of key indexes even appears to be “the great unifier” among people with disparate political beliefs.

His point is that soaring markets are so universally welcomed by a nation otherwise so divided that everyone seems fine ignoring the fact that the markets are way overvalued.

It’s not so much what Breslow had to say in his piece that caught my attention, but rather two charts he included that illustrate why the stock market is not necessarily representative of the economy.

One of those charts – presented below – shows the continued rise of the S&P 500 in 2019 even as the ISM Manufacturing Composite Index (ISM) has declined significantly over the course of the year.

The following chart might be even more compelling. Even though the metric that represents corporate profits as a percentage of GDP has been steadily declining since 2013, the S&P 500 index has continued to climb. 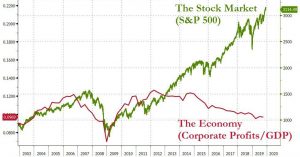 Some daring folks will try to “game” the markets based on their anticipation of continued buyer euphoria and the inclination of the Federal Reserve to implement accommodative monetary policy. But it’s important for earnest retirement savers to see the forest rather than the trees when it comes to evaluating the real condition of the economy to make decisions about individual finances. Fortunately, there is plenty of helpful information out there for anyone willing to look objectively at the current economic environment.

Could it be said there are two economies at play right now in America? I wouldn’t go that far, but there is little question that many people think our nation’s real (underlying) economy is fine because the financial markets remain invigorated. They seem to be unconcerned that the reason financial markets are so strong is largely that the Fed has been pushing them that direction – but you should be very concerned in my opinion.

Financial markets often are reflective of the real economy, but also are frequently unrepresentative of the real economy, too. When markets look strong against a backdrop of ugly economic data, it can lead casual observers to conclude the nation’s financial infrastructure is in good shape. Those people will go about their business – including the oversight of their portfolios – with a perception of the economy that is patently false.

If you are aware of what’s going on, though, you can make smarter decisions about your own retirement finances.

Gold and Silver Can Help Protect Your Savings from “False Economies”

One of the most effective ways to protect retirement savings from a false economy is owning assets that are both uncorrelated with popular financial indexes and have the demonstrated potential to grow stronger when real economies weaken. Physical precious metals are excellent examples of such assets. If you own this kind of asset, you are protected if the economy erodes into a crisis, and you are less likely to lose what others might. Other retirement savers may be surprised by an unexpected turn in the economy, but not you.

More important than any one precious metals account strategy, however, is the need for retirement savers to know the difference between what’s really going on in the economy from what appears to be going on. As the economic outlook grows murkier, this ability to see the distinction will become even more important.

It can be a challenge to get the kind of accurate, straightforward information you need. Fortunately, there is Augusta Precious Metals. My personal mission – and our company’s – is to educate Americans about this, so they can better protect their savings. For those who qualify, we have begun offering a unique, exclusive web conference that takes you behind the scenes of the financial markets and the economy for information that is otherwise hard to find, and I’d like to invite you to give us a call at 800-700-1008 to see if you do qualify. This no-cost web conference is the exact same one hall of fame quarterback Joe Montana saw this year after his financial advisors introduced him to Augusta as a solution for his own retirement savings worries. Joe is now not only an Augusta customer, he has become our official company ambassador.

Even if you don’t qualify or decide not to sign up for our amazing, info-packed web conference, I encourage you to call and speak with a knowledgeable Augusta gold and silver professional. We will patiently and pleasantly answer all of the questions you may have about buying and owning metals, including any questions you may have about gold IRAs. The gold IRA is one of the most versatile retirement products available, enabling savers to access not just physical metals but the full range of both alternative and mainstream assets.

Let Augusta Help You Protect
Your Future and Your Legacy!

Speak to an Augusta gold and silver specialist today.

Or fill out the contact form here, and a member of our team will be in touch with you shortly!