Last week’s blog article referenced gold’s nickname: the “crisis commodity.” I wrote about it in the context of the recent Iranian drone attack against Saudi oil operations. Saudi Crown Prince Mohammed bin Salman suggested that a shooting war involving Iran and Saudi Arabia (if and when it happened) would, in his opinion, lead to “total collapse of the global economy.”

An asset does not earn the title “crisis commodity” because it proves reliable in only select circumstances, such as when certain types of upheaval plague financial markets or the economy. It earns a title like that because it demonstrates a capacity to strengthen when nearly any meaningful crisis – or even the threat of a crisis – arises in nearly any significant realm of domestic or global society.

History is filled with examples of gold responding favorably to both crises and fear of crises, both short-term and long-term. Just recently, the day Nancy Pelosi announced a formal inquiry into impeachment of President Trump, the price of gold increased. On that most dreadful of days, September 11, 2001, the price of gold increased. Throughout the 1970s, the worst calendar decade for the U.S. economy in modern history, gold rose 1,500%.

From the first quarter of 2000 to October 2002, a particularly volatile period that saw both September 11 and the burst of the dot-com bubble, key U.S. equity indexes fell between 40% and 80% – but the price of gold increased. Gold increased during the official U.S. recession lasting from December 2007 through June 2009, a timeframe that included the 2008 financial crisis. The price of gold rose even more substantially in the years following the official crisis (2008 through 2011), when the effects of the crisis remained prominent worldwide.

Bottom line: If it appears a bona fide crisis is unfolding, it’s reasonable to expect gold prices will strengthen.

I also mentioned in last week’s article that when a crisis triggers gold’s price to suddenly burst ahead, the price tends to moderate as soon as it appears the crisis will be resolved. That moderation doesn’t negate the value of owning gold. The important thing to pay attention to is the fact that gold’s natural inclination is often to appreciate in crisis conditions. The price benefit usually persists longer when the crisis exerts a significant effect on the global economy. In other words, the inherent properties of gold that make it a universally revered store of value have historically benefitted those who own it for however long the crisis and its negative effects on the economy remain relevant.

This is especially good to know right now. The World Economic Forum’s just-released annual risk-assessment survey and report, the Regional Risks for Doing Business 2019, makes it abundantly clear there’s no shortage of threats to orderly operation of business and markets in every corner of the world. This year’s survey of roughly 13,000 business leaders in 130 countries generated a comprehensive list of diverse threats seen as key in each geographical region.

The list reveals just how precarious the security of the world’s global infrastructure and systems really is. Survey results also serve as a reminder for retirement savers to make certain they have included among their financial holdings the one asset with the best chance of defending portfolios against the effects of a crisis, regardless of source. I am, of course, referring to gold.

Cyberattacks, Fiscal Crises Among Biggest Risks to Business in 2019

The regional risks survey results are detailed in a recent article at Modern Diplomacy. On a global basis, current top-five risks to doing business that are seen as “fiscal crises include “cyberattacks”; “unemployment or underemployment”; “energy price shock”; and “failure of national governance.”

The following graphic provides a breakdown of the five biggest threats per world region: 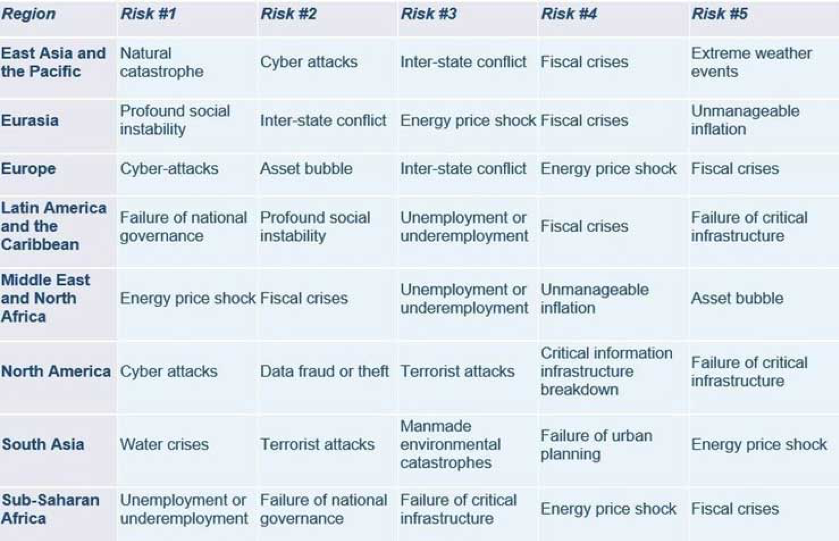 Any of the risks indicated here have the potential to exert a negative influence on the global economic infrastructure, including financial markets. In the 1970s, when gold made one of its most historic runs in modern history, the principal threats to doing business included high U.S. inflation, high U.S. unemployment, oil price shocks, political and geopolitical instability and a weak dollar. Times may have changed, and there are some new macro threats to be concerned about (such as cyberattacks), but it’s not difficult to see today in every region of the world some evidence of the same threats that were so prominent in the 1970s.

In regard to this array of risks, Eugenie Molyneux, chief risk officer commercial insurance at Zurich Insurance Group, remarked, “There is a real existential threat to businesses worldwide. Executives are concerned that governments have too much debt to be able to afford measures that could help avoid a recession, and see cyberattacks as the number one risk in 16 economies representing over 40% of the world’s GDP.”

John Drzik is president of global risk and digital at Marsh, a specialty insurance broker and risk management firm. He also made particular note of cyberthreats, while emphasizing the more hazardous climate overall. “Cybersecurity remains the most concerning risk to business leaders in advanced economies,” he said, “and growing technology dependence for many businesses will only amplify this. Combined with fractious geopolitical developments, and growing economic concerns, executives face a very challenging portfolio of potential threats.”

Protect Your Portfolio with Gold

The world is awash in risks. As time goes by, if we look at history for clues, we can expect that the number, size and scope of those risks are likely to increase. As dicey as the 1970s were, there was no threat of cyberattack. It’s also safe to assume that 1970s experts did not believe terrorist attacks were as big a risk as they are today. As a retirement saver, finding ways to protect your portfolio from whatever the future holds should remain among your highest personal priorities.

If you don’t own potentially risk-neutralizing assets such as silver or gold presently, perhaps it’s time to give physical precious metals a serious look. If you’re not sure where to begin, that’s understandable. It’s not difficult to find precious metals companies, but which should you trust?

One great place to start is with an established industry leader that can boast of a rapidly growing inventory of outstanding ratings and reviews from verified customers – Augusta Precious Metals. When you call Augusta at 800-700-1008, you’ll speak to a knowledgeable gold and silver professional who will answer all of your questions in a relaxed, no-pressure interaction you’ll actually enjoy. There’s no reason to hesitate. In fact, as you can see, there are plenty of compelling reasons not to hesitate. Call today. And when you do, don’t forget to ask the representative you talk to how easy it is to open a silver and gold IRA that features precious metals from Augusta.