As the Biden presidency begins in earnest, as much as half of the country presumably is worried about what the president’s agenda will be—they didn’t vote for him. But among those potential problems, there is at least one silver lining: Some are seeing signs the new president’s copious agenda could be favorable for silver. There is reason to believe the country may see increases in potentially silver-favorable economic initiatives. And one anticipated recipient of that spending – green energy – could itself prove to be a springboard for the white metal due to silver’s importance to green technology. Is it possible the Biden presidency could be remembered for coinciding with a significant silver surge?

There is, of course, no way of knowing for certain if silver will flourish over the next several years. But an assemblage of potential pro-silver factors and influences continues to grow and intensify against the backdrop of the new Biden regime. Given this, it’s not unreasonable to ponder whether President Biden’s policies and actions might, in fact, prove particularly good for silver’s fortunes in the years ahead.

You already may know about silver’s capacity to strengthen as a hedge against dollar-weakening spending initiatives. What may not be clear to you is how President Biden’s agenda could prove to be a plentiful source of such measures.

First, there’s the matter of pandemic-related stimulus, which ultimately will push the deficit and federal debt higher and could increase the appeal of perceived inflation hedges such as precious metals. Both houses of Congress last week approved a budget resolution that effectively ensures passage of the president’s proposed $1.9 trillion pandemic stimulus package. While the details still have to be worked out, I believe we’ll see that package become law. As it stands right now, the expectation is for that legislation to pass sometime in the middle of March.[1]

Then there’s the greater overall Biden agenda as it exists separate from pandemic-related spending. According to the bipartisan Committee for a Responsible Federal Budget, President Biden’s fiscal agenda during his tenure could increase the national debt by as much as 8.3 trillion dollars by 2030.[2] Again, that is in addition to any pandemic-specific stimulus spending in which the Biden administration might engage over the coming years. It’s expected that the Biden presidency could mean increased spending in a variety of areas, including in the realms of child care and education, healthcare, retirement, disability benefits, infrastructure, research, and climate change.

Thanks to all of this, together with silver’s history of rising in value throughout big-spending periods for the U.S., it’s reasonable to consider President Biden’s policy efforts on behalf of both pandemic economic recovery and his overarching policy agenda will help energize silver on the basis of its perceived value as an inflation hedge. But that’s only part of why silver could gain in value during the Biden presidency.

In addition to silver’s capacity to thrive as a perceived inflation hedge, there’s the expectation that demand for silver will grow through the foreseeable future as the global economy recovers from the pandemic. As the metal boasting the greatest electrical conductivity, silver’s indispensability as a raw material in the manufacturing of a wide variety of products is a matter of record.

But the outlook for silver as an industrial component could be even greater than you might think. That’s because of the global business community’s rapidly growing focus on climate change and the development of silver-essential green energy technologies. A recent article at Bloomberg details a Bank of America estimate “that the potential market capitalization for companies tackling climate to be about 6 trillion dollars across things like renewables, electric vehicles, and environmental, social and governance.”[3]

And based on his announced agenda, one that includes a historic prioritization of policies related to climate change, President Biden will be a champion of green energy during his years in office. In fact, Biden has committed to spending roughly $2 trillion on green energy initiatives during his time in office.[4] Should the president adhere to this robust policy effort, the implications for silver could be substantial.

Analyst: Green Energy Could Lead to Silver Rush, “a Turbo-Charged Version of Gold”

Goldman Sachs’ global head of commodities research, Jeffrey Currie, is one analyst who’s particularly optimistic about the near-term implications for silver stemming from the emphasis on green energy.

Appearing last week on CNBC’s “Fast Money: Halftime Report,” Currie identified silver’s role in the anticipated green energy boom as the primary reason he’s so enthusiastic about the metal. Currie likes it so much, in fact, that he prefers it to gold right now.[5] “I like to say that it’s a turbo-charged version of gold,” Currie said. “That’s because silver is a key component for solar panels and more green energy spending is likely on the horizon.”

In particular, Currie identified silver’s role in the manufacture of solar panels as important to the asset’s potential growth. Referring to the expectation of an increase in spending on both infrastructure and pandemic-related economic recovery, Currie said that with silver “you get that added boost that a lot of that spending … is going to be green [capital expenditures]. That green capex goes into solar panels and then silver is the biggest benefactor.”

There is a growing body of data that underscores the rapidly increasing emphasis on green energy. The graphic below illustrates the sources of power capacity anticipated to be added throughout the U.S. by October 2023. Analysts such as Jeffrey Currie of Goldman Sachs suggest the positive implications for silver from an expected green energy boom could be substantial. 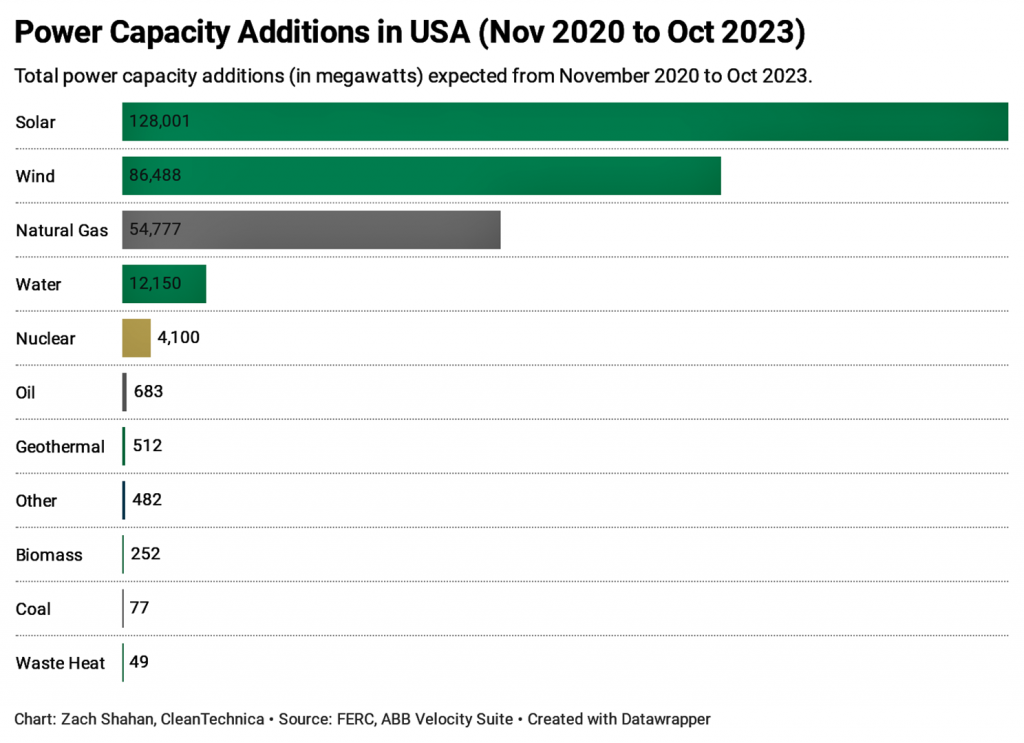 So just how big might a silver rush be? On the one hand, despite enthusiasm for green energy’s implied benefit to silver, several investment banks see silver breaking only a little above 30 dollars per ounce in 2021. For example, Canadian Imperial Bank of Commerce projects silver to reach 32 dollars per ounce in 2021.[6] From present levels, that would be a jump of about 19% – certainly nothing to sneeze at, but perhaps not indicative of the hype surrounding silver at the moment.

On the other hand, though, other global investment giants do expect an impressive silver rush this year. Danish megabank Saxo is predicting 50-dollar-per-ounce silver in 2021 and cites as the primary basis for its call the same reason Goldman Sachs’ Jeffrey Currie is so bullish on silver: solar panel production.[7] For their part, analysts at Citibank also say 50 dollars per ounce is “a very realistic [price] target” for silver.[8] In fact, Citi goes as far as to suggest that 100-dollar-per-ounce silver is “possible” this year. And looking beyond 2021, some silver price projections are especially robust. For example, Augusta Precious Metals’ director of education Devlyn Steele, who successfully predicted the silver rush and gold rally after the 2008 financial crisis, is forecasting silver to reach 125 dollars per ounce by 2023.

But what I think is of greater value in determining whether a silver rush might be coming – more important than any specific price targets – is simply recognizing the broad array of potential pro-silver factors that could become relevant in the coming years, as long as we have a Biden presidency. And the way the prospective economic landscape looks right now, these factors include anticipated high doses of substantially accommodative monetary and fiscal policy, as well as an expected major commitment to green energy spending.