Gold and silver tend to get along like peas and carrots, as Forrest Gump would say. But just as peas and carrots are not the same vegetable, gold and silver aren’t the same metal. Yes, they’re both precious metals and at times each have demonstrated a potential for strengthening in the face of dollar weakness, inflation fears and various expressions of economic and geopolitical upset. But there are also some notable differences between the two.

One of the most significant differences is the heavy industrial use of silver. Gold’s utility in manufacturing is limited, but a variety of industries consider silver an invaluable raw material due to its high conductivity of heat and electricity. In fact, silver can boast of having the highest electrical conductivity of all metals. The photographic, medical, nuclear, “green” energy and automotive industries are just some of the sectors that depend heavily on silver.

Silver’s industrial importance lies at the root of one of the metal’s biggest advantages as an asset: the potential to thrive during periods of economic robustness as well as during recessions and other periods of weakness. Many people don’t consider buying precious metals as a way to capitalize on an improving economy. The reputation of gold and silver – and gold, in particular – tends to be as assets with the capacity to strengthen at times in adverse economic and geopolitical circumstances. As a result, they often are purchased solely as potential hedges against trouble.

Silver has demonstrated the propensity to act as a hedge in the past. But the white metal also has displayed a tendency at times to gain in value during strong economies, precisely because of its industrial importance. And when economic uncertainty and vigor overlap, silver can exhibit an especially dynamic response.

Saxo Bank says we’ll see this overlap in play next year, a projection that sits at the foundation of Saxo’s eye-opening forecast of silver’s price in 2021. In one of their self-proclaimed “outrageous predictions” for 2021, Saxo says we’ll see silver – currently around 24 dollars per ounce – reach a record price of 50 dollars per ounce next year. A closer look at both Saxo’s rationale and recent history suggests to me the bank may be onto something. Perhaps their prognostication isn’t so “outrageous,” after all.

Silver Price Could “Turbocharge” in 2021 Due to Industrial Demand

Silver has found itself caught in the same general consolidation pattern that has frustrated gold owners over the last several months. From April through August, silver was one of the biggest stories of the year. That’s because the metal surged more than 100% against a backdrop of “anything-goes” Federal Reserve quantitative easing (QE) and whopping deficit-spending cued by the pandemic. Since September, however, silver largely has been trading sideways. Traders and analysts have been surveying the uncertain economic and political landscape as they consider which substantive direction the metal should head next. Does Saxo’s silver prediction serve as a clue – or even a cue – that we’ll see the metal resume the impressive upward momentum it demonstrated earlier this year?

We can’t know that now, of course. What we can do is take a more detailed look at Saxo’s “outrageous prediction.” This will help us better understand both the bank’s silver optimism and why, more generally, silver is uniquely configured to benefit from certain things in the economic climate.

In a December 8 statement, Saxo’s head of commodity strategy, Ole Hansen, explained the reasoning behind the bank’s forecast. In a company website article, Hansen effectively attributed the projection to silver’s capacity to strengthen sometimes in the face of dollar-debasing accommodative monetary policy and free-spending fiscal policy, as well as the way it can benefit from a thriving economy under certain conditions. According to Hansen, next year will see both a recovering economy and ongoing support from the Fed and Washington. In the article, the analyst says that environment will fuel silver in two ways.

“2021 brings the usual suspects that power silver higher on its hard asset/precious metal side as the U.S. dollar weakens, and as investors are faced with the harsh reality of no relief in sight from negative real interest rates,” Hansen said. He added that “with a COVID-19 vaccine in rapid roll-out by the middle of the year, the excessive liquidity and over-easy policy drives a powerful bid into any hard asset.”

That’s Hansen’s easy-money case for silver. But he makes an industry-essential case for silver in 2021, as well: “Turbocharging the rise in the silver price in 2021, even relative to gold, is the rapidly rising demand for silver in industrial applications, especially those driving the green transformation, such as photovoltaic cells used in solar panel production.”

Hansen closes his note with the punchline: “Trade: Long silver as the price races to an all-time high of $50 per ounce in 2021.”

Silver’s potential to dynamically respond in two ways to large-scale stimulus measures is a price reaction we’ve seen before, according to my research. I’m referring specifically to when significant monetary and fiscal stimulus was enacted during the years of the financial crisis – also known as the Great Recession.

In 2008 and 2009, at the height of the crisis, the U.S. registered two straight years of negative gross domestic product (GDP). The Federal Reserve’s aggressive response included the initiation of two rounds of QE – first in December 2008 and again in December 2010. For its part, the government racked up the then-three-highest annual budget deficits in history from 2009 to 2011 as it tried to “spend” the country out of the crisis.

What I find particularly noteworthy is the performance of silver in 2010, when GDP was markedly improved (+2.5%) over the previous two years. The chart below shows both gold and silver strengthening overall as large quantities of economic stimulus were being applied throughout 2009 and 2010. But look what silver does in late 2010 when it’s clear the economy is on the mend, the government continues spending, and the Fed kicks off a second round of QE. Notice the degree to which silver separates from gold in the second half of that year and soars into 2011. 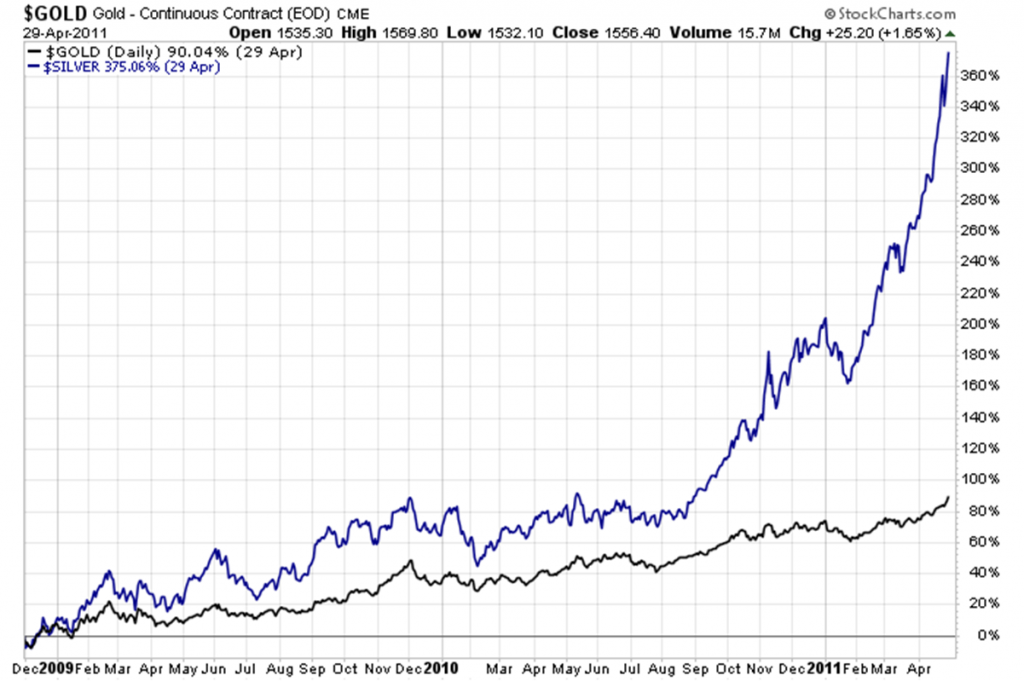 Others See Big Things Ahead for Silver

We don’t know if silver will perform that impressively again for another multiyear period against the backdrop of recent and future significant Fed and government stimulus. But what if we were to completely dismiss historical evidence suggesting a possible cause-and-effect relationship between stimulus and silver performance? Even that doesn’t limit the possibility that the metal will respond well to both the dollar-weakening and economy-stimulating effects of expansionary monetary and fiscal policy.

Saxo Bank clearly sees that potential in silver next year. It’s worth noting that Citibank has the same general outlook for silver. Last month, Stockhead.com detailed portions of a Citi analyst note which projected “$50-per-ounce silver by mid-2021 on the back of further substantive policy easing, a relatively rapid global growth recovery, sharply declining U.S. real rates and strong silver investment demand.” And Augusta Precious Metals’ director of education Devlyn Steele is particularly optimistic about silver’s prospects for the foreseeable future. If his personal analysis proves correct, we very well could see silver at 125 dollars per ounce within the next three years.

More important than any prediction of record silver, however, is an understanding of the conditions under which the metal has been especially responsive during certain periods in history. I believe we saw those conditions in play in 2010. And it’s possible we could see them again in 2021.