Retirement Crisis: Is the Current Economic Climate Making It Worse? 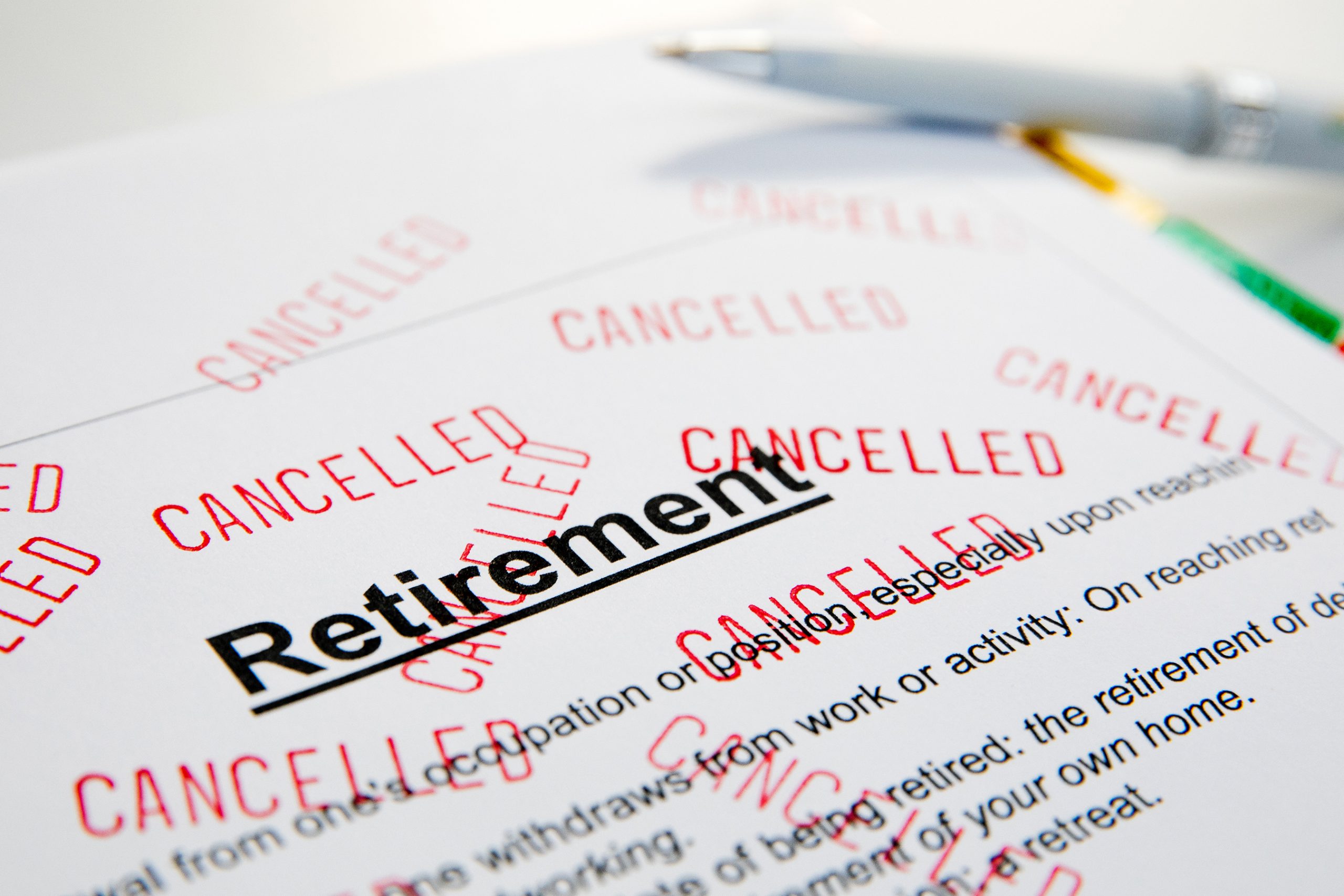 For years, we’ve been told there’s a retirement crisis in America. Survey after survey reveals that Americans don’t have enough money to get by in what is supposed to be their golden years.

As I said, we’ve been hearing about this for a long time. In 2013, the National Institute on Retirement Security shared data that said the median retirement account balance for “near-retirement households” was just $12,000.[1]

There are more recent measures that suggest a slightly rosier picture. According to a recent survey by Anytime Estimate, baby boomers – the youngest of which are 58 years old – have accumulated a median sum of $112,000 in retirement savings.[2] But that’s still not much. The Anytime Estimate survey results indicate that someone who earns the median 2020 salary of $35,800 and expects to live for 20 years in full retirement should have roughly $575,000 set aside.[3]

It’s difficult to attribute the “macro” shortfall in retirement account values exclusively to what’s going on in the economy right now. But it is reasonable to suggest that the current economic climate is intensifying the problem to a significant degree – and doing it in multiple ways.

For one thing, we have no shortage of data that indicates Americans are limiting – even eliminating – contributions to retirement plans as 40-year-high inflation strains household budgets. I wrote about some of that data recently. And you can find more of it in the results of the Anytime Estimate survey. Before the pandemic, 93% of working folks were saving for retirement. Now, the number is down to just 63%.[4]

Then there’s the negative impact on purchasing power that persistently high inflation has had on accumulated savings. Inflation has averaged 6.5% since April 2021.[5] Using that figure – and assuming no fluctuation in nominal account value – a retirement saver with a nest egg valued at $500,000 last April has seen that account lose more than $35,000 in purchasing power through the current day.[6]

And there’s still another way the current economic climate appears to be worsening the retirement crisis. I’m referring to the beating that retirement funds now are taking at the hands of economic volatility. According to a well-known retirement research institute, IRAs and 401(k)s have lost several trillions in value since the beginning of the year. We’re going to spend some time discussing this part of the retirement “problem,” including hearing from individuals who right now are dealing with it. I’m also going to talk about what some are doing – and could be doing – to help minimize the effects of both current and longer-term economic uncertainty on their personal financial viability during retirement.

I obviously talk a lot about the impact that the current economic environment is having on consumers. But I don’t think enough attention is being paid to the impact it’s having on savers and our readiness for retirement as a nation. So I will continue to discuss it. Because while there may be nothing you can do to help mitigate the risks to America’s retirement future, perhaps there still is time for you to mitigate the risks to your own.

Retirement Analyst: 401(k)s and IRAs Have Lost $3.4 Trillion This Year

As an American consumer, you’ve had more than your share of bad news this year. At 8.6%, inflation now is at its highest level since December 1981.[7] Global markets have demonstrated stomach-churning volatility. And consumer sentiment has never been worse, at least in terms of the heavily-watched University of Michigan consumer sentiment index. That measure is now at its lowest point since the school began keeping track of consumer sentiment data – 70 years ago.[8]

Unfortunately, if you also are saver, Alicia Munnell – director of the Center for Retirement Research (CRR) at Boston College – has even more bad news for you. In a recent blog post for MarketWatch, Munnell said that roughly $3.4 trillion has evaporated from Americans’ retirement plans since the beginning of the year.[9]

According to center data, about $1.4 trillion has been lost from 401(k)s since January. IRAs have seen another $2 trillion disappear.

In an article about the center’s findings, Fox Business spoke to several retirement savers who made it clear the losses they’re seeing in their accounts are particularly tough to take.

One woman told Fox Business that her 401(k) has been “decimated” so badly that she’s questioning the viability of retiring in the next couple of years, which has been her plan up to this point.

Another woman told Fox Business that the last time she dared look at the statement of her husband’s Thrift Savings Plan – a retirement plan for civil service workers and the uniformed services – it was down $200,000. “I don’t want to look at it,” she said.[11]

There’s another way the current economic climate is punching holes in America’s retirement-plan boat. One of the people to whom Fox Business spoke admitted that he’s been tapping his nest egg to pay everyday expenses.

“It’s been painful,” this gentleman said. “I honestly had to take out some funds out of my 401(k) to, you know, support myself and my family with the inflation and everything else that’s happening.”[12]

He’s by no means alone in raiding his retirement plan out of financial necessity. According to the Anytime Estimate survey, nearly two-thirds of Americans have reached into their retirement plans during the last two years to cover expenses. And 1 in 6 of those has withdrawn $15,000 or more.[13]

Well before the onset of meaningful inflation last year, the outlook for retirement savers – and retirement savings – in America as a whole was less than ideal.[14] But it’s difficult to argue against the idea that the particularly challenging economic environment of the past year or so has made retirement uncertainty even more uncertain.

So what – if anything – can be done to fight back?

“Great Unretirement”: 1.5 Million Retirees Have Returned to Work in the Past Year

There are no easy answers. No simple fixes. No waves of the magic wand.

One “solution” is for those approaching retirement age to simply keep working. You might recall that the woman who spoke to Fox Business about her “decimated” 401(k) suggested she very well might have to delay the retirement she was looking forward to beginning in the next year or two.

She’s not the only one. Among the results of the Anytime Estimate survey is data that says 40% of Americans are delaying retirement right now because of current economic conditions.[15]

But as significant as that news is, I think it pales in comparison to what’s being called the “Great Unretirement.”[16] An estimated 1.5 million retirees have gone back to work in the past year.[17] And according to a recent CNBC survey, 68% of those who retired in the past two years would consider returning to work now.[18]

“I just interviewed two weeks ago and I’m hoping to get hired,” one survey respondent said. “I’m scared of losing my home.”

“The bottom line,” says CRR’s Alicia Munnell, “is that older workers have gone back to work.”[19]

To be sure, continuing to work – or going back to work – can be among the biggest helps in the short term. But is there anything else retirees and/or retirement savers can be doing to help diminish the impact of not only the current economic turbulence but longer-term retirement uncertainty, as well?

One possible idea is to add to one’s holdings those assets that have historically demonstrated the ability to serve as a hedge against the effects of an agitated economy. Gold is one example of such an asset. The brief COVID-19 recession that lasted from February 2020 through April 2020 saw gold jump 9%. And for the entirety of 2020, gold climbed 25%.[20]

The price of gold also strengthened during the 18-month long recession that coincided with the global financial crisis. From December 2007 through June 2009, the price of gold increased by 20%.[21]

And I can tell you that gold has enjoyed a good deal of interest this year, with demand for the metal up 34% year over year in the first quarter due to soaring inflation and the Ukraine invasion.[22]

Gold may or may not be an appropriate asset choice for you. That’s a decision only you can make for yourself. The bigger issue, in my view, is recognizing that planning to work for literally the rest of your life may not be the most prudent strategy to help mitigate the effects of both current and longer-term economic uncertainty.

Granted, working during your senior years may be a feasible option for a while. But the likelihood is that sooner or later you’ll have to stop working altogether. And when that day comes, it could be the decision to hedge and diversify your savings that proves to be among the most valuable for the next stage of your life.

[13] Dunaway-Seale, “2022 Data: Americans Have Less Than Half the Recommended Retirement Savings.”

[15] Dunaway-Seale, “2022 Data: Americans Have Less Than Half the Recommended Retirement Savings.”