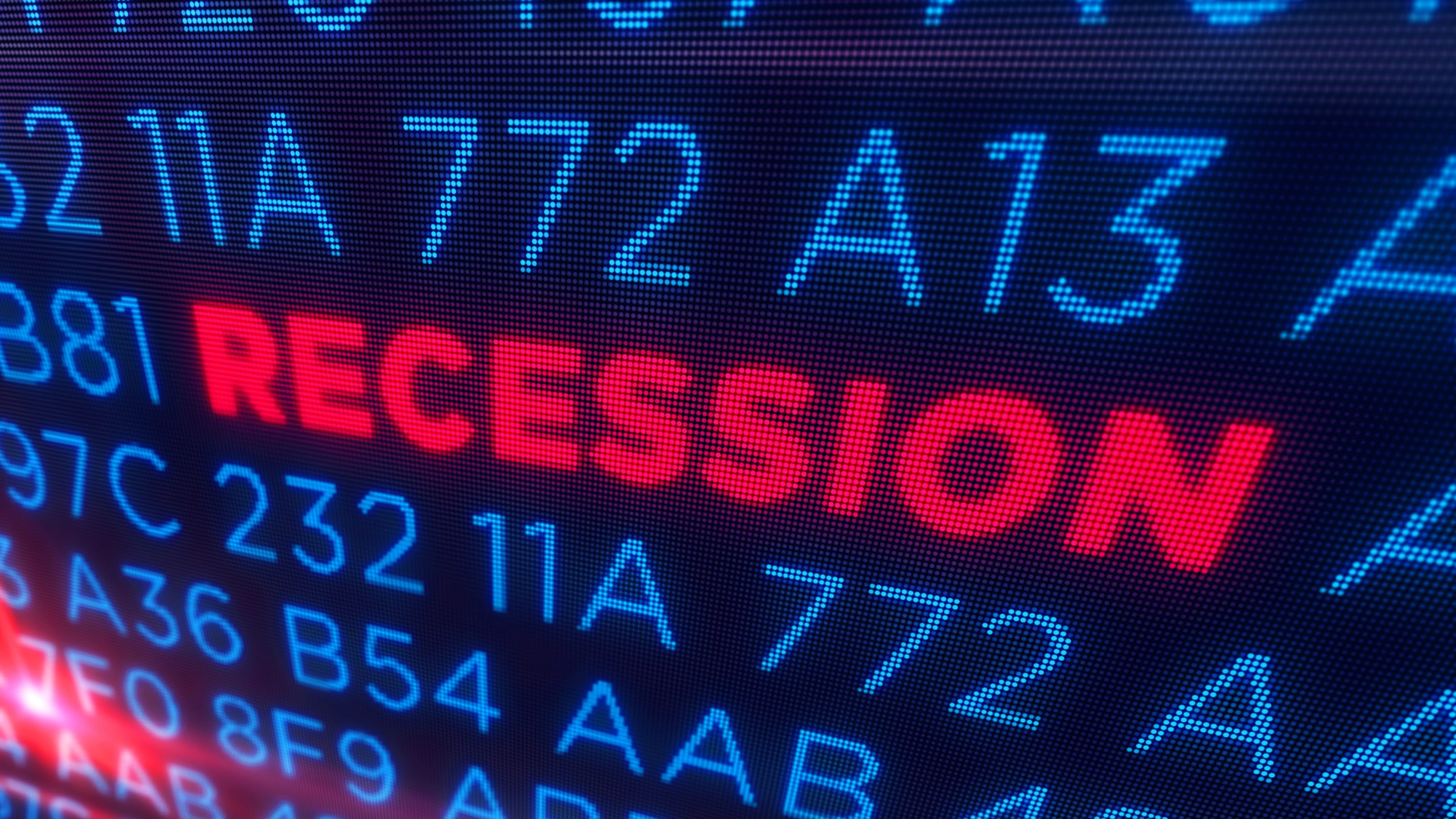 Soaring prices have been the big economic story for quite a while. But there are signs that inflation could be on the verge of getting pushed off the front pages – or at least further down on the front page – to make room for another ominous economic condition: recession.

The White House was quick to dismiss the significance of the drop in GDP by attributing it to what President Biden called “technical factors.”[2] He was referring to the determination that growth was pulled backwards by such influences as a drop in exports, a rise in imports and less spending by governments at all levels, rather than by a drop in consumer spending.[3] Indeed, consumer spending increased by 2.7% against a backdrop of rising prices.[4]

By contrast, the Editorial Board at the Wall Street Journal seemed to find the GDP figure worthy of at least modest alarm, noting that the contraction came before any meaningful interest-rate increases had been initiated.[5] In other words, “technical factors” or not, news of a shrinking GDP one week before the central bank raised interest rates by a bigger-than-usual margin of 50 basis points could be viewed as concerning.

As a matter of fact, we now are hearing from highly respected figures on the macroeconomic front that recession is all but certain. One of the world’s most respected global banking institutions recently revised their prediction of a mild recession – made only a few weeks ago – to say they now are expecting the U.S. to experience a significant downturn. And the former vice chair of the Federal Reserve recently suggested for the first time that recession is “inevitable.”

In my view, it’s worth taking note of these publicly declared projections from respected economic authorities in recent days and weeks that we’re in store for a major economic setback. And it’s also significant that Q1 GDP surprised practically everybody and shrank before the effects of rate hikes actually were felt. That certainly doesn’t help the case of those who contend we will see either no recession or one that proves relatively inconsequential.[6]

There’s a lot to talk about this week. So let’s keep going…

Deutsche Bank: Nothing Short of a “Deep Recession” Will Bring Inflation Under Control

I’ll admit I did a bit of a double-take when Deutsche Bank announced its revision to the downside in their recession outlook for the U.S. economy. That’s because the gloomier forecast came just weeks after the bank had projected the country would enter no more than a “mild” recession next year.

Unsurprisingly, Deutsche analysts have attributed the change in position to the likelihood that the central bank now has no choice but to act decisively in the months ahead to bring inflation under control. And the Fed really has only one weapon to deploy directly against soaring prices: interest rate hikes, which have a long history of triggering recessions in the U.S.[7]

In a report transparently titled, “Why the coming recession will be worse than expected,” Deutsche said, “We regard it…as highly likely that the Fed will have to step on the brakes even more firmly, and a deep recession will be needed to bring inflation to heel.”[8]

According to the analyst team led by David Folkerts-Landau, Deutsche’s chief economist and head of research, the compelling nature of inflation at this time leaves the Federal Reserve little choice but “to err on the side of doing too much.” This implies the Fed will have to fully embrace a stringent tightening regime, regardless of how uncomfortable doing so might prove to be for all concerned in the near term.[9]

It is clear that Deutsche analysts are puzzled as to why they seem to be almost entirely alone among multinational financial institutions when it comes to anticipating a significant downturn. For example, Goldman Sachs sees no more than a 35% chance of recession in the next couple of years and Lisa Shalett, chief investment officer at Morgan Stanley, authored a downright optimistic assessment of the economy’s prospects, saying her firm is “far from calling a U.S. recession.”[10]

Those relatively rosier views of the economy’s near-term health stand in sharp contrast to Deutsche’s, something Folkerts-Landau explicitly noted in his report.

“I am very surprised we are the extreme outlier on the street,” he wrote. “Given the macro starting point, my view is that the burden of proof should be on why this boom/bust cycle won’t end in a recession.”

I don’t know if it’s any consolation to David Folkerts-Landau, but there are other prominent economists who seem to agree with him, including the former vice chair of the Federal Reserve, Roger Ferguson.

“A recession at this stage is almost inevitable,” Ferguson said in a recent appearance on CNBC’s “Squawk Box.” Ferguson went on to suggest the factors exacerbating underlying inflation – such as the shutdown in China and oil-price uncertainty – essentially are ingredients in “a witch’s brew” of inflation that now can be addressed only through meaningful rate hikes.[11]

“The probability of a recession in 2023 is certainly very, very high,” Ferguson said later, “because of the challenge of trying to get this roaring inflation under control and having so few tools to do it.”

Ferguson also pointed to the real-time slowdown in global growth as a sign of the trouble he says is on the way.

The rest of the world is also slowing pretty dramatically. We saw that here, with the net export numbers being much weaker than had been expected. And so we are seeing a global slowing here relatively rapidly, just when central banks in a number of jurisdictions – the U.S., the U.K. – are tightening.

The specter of recession seems to be hovering over the fragile economic landscape. We still don’t know if an actual recession will come to pass. But as the prospect of a sizable downturn grows, retirement savers may have to spend as much time considering how they can hedge against recession fallout as they’ve spent hedging against inflation.

Those who’ve elected to include precious metals among their holdings to help ward off inflation’s effects may decide gold and silver could be helpful in the fight against a possible recession, as well. That’s because metals continue to exhibit the fundamental lack of correlation with mainstream assets that can be helpful during periods of general economic uncertainty.[12]

That’s the good news. The not-so-good news is that for those who’ve yet to include gold and silver among their holdings, the perception of metals as “alternative” assets can mean that clear, straightforward and actionable information on gold and silver may not be readily available.

Fortunately, Augusta Precious Metals can help with that.  When you call Augusta at 800-700-1008, you’ll speak with a customer success agent who appreciates the opportunity to help retirement savers learn more about gold and silver.

And when I say, “learn more” about metals, I mean it. For those Americans who’ve been turned off to owning gold and silver because of the unfortunate experiences they’ve had trying to gather information previously, they will find Augusta to be a breath of fresh air, in my opinion. No gimmicks or high-pressure sales tactics; no outrageous claims or narratives. Just information – the kind of information you need to make a prudent decision about whether precious metals are right for you. In fact, we love helping Americans identify and avoid those kinds of tactics which are used by some gold IRA companies.

When you call, we’ll send you a free guide on metals and gold IRAs. You also will learn about our unique one-on-one live web conference – also free – that takes an “insider’s” look at the challenges facing retirement savers today, including the economy and inflation, and also details what it takes to set up an account (including fees). The web conference is designed by our on-staff, Harvard-trained economist, so you know you will come away with some great information.

It appears the Federal Reserve will have to walk a thin tightrope from here to ensure the economy is overcome by neither inflation nor recession. Retirement savers might think it a good idea to stretch a safety net across their nest eggs as the Fed embarks on its precarious journey. For those trying to decide if gold and silver should make up a piece of that net, there’s Augusta Precious Metals. Call us today – we look forward to hearing from you.