The Federal Reserve announced in June 2019 that interest rates would be headed back down. It was confirmation at that time that a decade of accommodative monetary policy hadn’t been effective in preventing a global slowdown. Recession was looming. Gold and silver took the hint and began a steady climb upward.

But it was in 2020 that both metals really took off. Not right away, though. As you might recall, the early moments of the pandemic prompted panic-driven selling of practically every kind of asset. However, once the Federal Reserve announced in late March it would do everything in its power to backstop the economy, the metals began surging. And, as fast as the gold bull started running, the silver bull ran even faster. From March 23 – the date of the Fed’s announcement – gold has jumped 30%, while silver has skyrocketed 115%.

The kind of Fed quantitative easing (QE) we have seen during this timeframe can have a profoundly positive effect on gold and silver. We saw the relationship play out during the 2008 financial crisis, and we’re seeing it again today. But it appears QE can have an even more drastically positive effect on silver than gold. Why is that? I’ll give you a hint: It has everything to do with the dual nature of silver: It is both a safe-haven asset and an essential industrial metal.

Silver is an essential industrial metal. The reason for this is silver’s high conductivity of both heat and electricity. In fact, silver is known to have the highest electrical conductivity of all metals. Silver is used in a wide variety of industries, including the photographic, medical, nuclear, “green” energy and automotive industries.

But silver is not only an industrial metal. It’s a monetary metal, as well. This feature of being simultaneously a highly valuable industrial metal and prized precious metal distinguishes silver from gold, platinum and palladium.

This unusual duality found in silver is one reason it has frustrated savers at times. When economic conditions first sour and it appears safe-haven assets should thrive, silver will sometimes initially sputter while gold jumps. Why does this happen? Because a general economic slowdown means less silver will be needed by industry.

Silver is naturally inclined to strengthen in bad economies on the basis of its safe-haven benefit. But industry’s buying less of it due to a bad economy can hold it back at first.

That said, when the Fed decides conditions are dire enough to warrant drastically loose monetary policy, silver’s sputtering often will end abruptly, and silver prices will soar. In other words, silver’s principal benefits normally sit somewhat in opposition to one another. But when the Fed goes “next level” with quantitative easing, the industrial demand and safe-haven asset properties of silver are positively triggered. The resulting effect can send the white metal skyrocketing.

To understand why QE can spark silver like this, we have to understand what QE is. In a nutshell, the Fed purchases enormous sums of securities it normally wouldn’t buy as a part of its regular operations. This amounts to an emergency effort to quickly inject a mountain of money into a troubled economy. The result is that credit markets are loosened. Lending and investment becomes easier. Business is stimulated. That’s good for industrial consumers of silver – which means it’s good for silver prices.

QE also can result in both real and feared debasement or devaluing of the currency. This triggers interest in safe-haven “hard” assets. Again, good for silver prices.

In 2008 and 2009, the U.S. recorded two straight years of negative gross domestic product (GDP). It was only the second time that had happened in the previous 50 years. Business conditions returned to a semblance of normalcy in 2010 and 2011, as evidenced by two straight years of positive GDP. Sure enough, as the chart below illustrates, silver moved ahead of gold with the first announcement of QE in December 2008. Both metals continued strengthening over the next two years while the Fed’s asset purchases and their intended effects permeate the marketplace. Then, with a much-improved GDP in 2010 and another around of QE that December, silver made its bold move. It sharply separated from gold to the upside in late 2010. 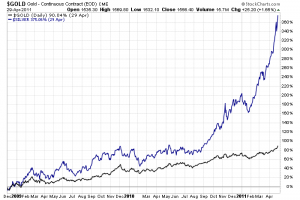 Silver appears to be repeating the same general pattern during the current pandemic-cued economic crisis. The chart below runs from the beginning of 2020 through today. Both gold and silver saw some mild strengthening at the very beginning of the year. At that time, we were aware of the possible economic threat posed by the novel coronavirus, but the full-blown pandemic had yet to ensue. Once it did, there was a short-term, panic-driven mass selloff of all assets by savers and traders. However, once the Fed made clear that an unprecedented amount of QE help was on the way, both metals began improving immediately.

As the year has worn on, the central bank has reiterated it will be there for the long haul. The result has been great optimism among silver buyers. They’re anticipating a rejuvenated business climate (good for industrial silver), as well as a weakened dollar (good for safe-haven silver). 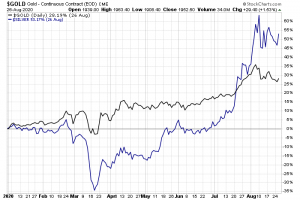 Fund Manager: “Plenty of Upside for Gold and Silver”

So what does this mean for silver going forward?

As long as the principal drivers of precious metals – massive QE and deficit spending – remain in place, silver should continue to soar. In a client note written last week, Ned Naylor-Leyland, precious metals fund manager at Jupiter Asset Management, said, “There is plenty of upside for both gold and silver in our view and … for silver to continue to outshine even gold.” Naylor-Leyland pointed to both silver’s industrial and safe haven demand as a basis for his projection. He mentioned silver’s growing use both in the medical and electronics industries, as well as its role as an inflation hedge. Referring to the latter, Naylor-Leyland said that QE and greatly increased deficit spending are “tipping investors over the edge in their distrust of fiat currencies – especially the U.S. dollar.”

Augusta Precious Metals’ senior economic analyst Devlyn Steele also expects big things from silver in the years ahead. He recently revised his 36-month price targets for both gold and silver to jaw-dropping levels. Steele forecasts gold to reach 5,000 dollars per ounce within three years and silver to hit 125 dollars per ounce in the same period.

The principal drivers of gold and silver are hyper-accommodative monetary policy and massive government spending. But the dual industrial and safe-haven-demand properties unique to silver put it in a position to thrive especially well in the wake of these measures. Silver often is overshadowed by gold as a matter of course, and it’s not unusual for people to forget it’s an option. But looking past the white metal in an economic environment that has proven to be so optimal for it could be a costly mistake for retirement savers.