Drastic Fed policies such as quantitative easing (QE) do have the potential to jumpstart anemic economies, but they also can weaken the dollar. Because silver is a precious metal with inflation-hedging capacity and also an essential raw material for so many industries, it potentially can benefit acutely from the application of QE. It’s a good reason to keep an eye on silver this year, in my opinion. But I think there could be another reason to watch silver: the recent behavior of the gold-to-silver ratio.

The gold-to-silver ratio is a simple metric that seeks to determine if silver is undervalued, overvalued or fairly valued. It looks at silver price in terms of gold price. The ratio is nothing more than a measure of the number of ounces of silver you can purchase with one ounce of gold.

Precious metals experts debate the utility of the ratio in making silver purchase decisions, but here’s something that cannot be debated: The ratio’s biggest drops from all-time highs this millennium have coincided with some of silver’s biggest price surges. Since 2001, the ratio has twice dropped from at least 40%, from what in each case were all-time highs, before climbing again. And each time the ratio fell from peak to trough, the price of silver surged.

The gold-to-silver ratio reached its latest all-time high in April 2020. Since then, the metric has fallen again by about 40% – and could fall even further, according to CPM. If it does, that means the price of silver could continue to strengthen in part on the basis that it’s still could be viewed as undervalued right now.

Below is a chart of the gold-to-silver ratio since 2001. Among the trends that stand out are the significant ratio drops that occurred from the middle of 2003 to early 2008 and again from late 2008 to early 2011. 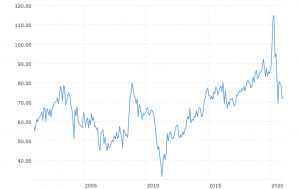 Now the ratio appears to be in the midst of another sizable decline. As it has dropped, silver’s price has appreciated significantly. And according to CPM, there’s reason to believe the ratio could sink even further – and that silver could move even higher.

During the earliest days of the pandemic, when it became apparent the associated economic fallout would be substantial, tremendous volatility plagued practically all assets. Silver, which exists in a much smaller market, was especially hard-hit by the upheaval. As silver prices sank, the gold-to-silver ratio – which was already at dizzying levels – climbed even higher. During March and April, the ratio reached record measures well above 100. At that time, if you looked at silver’s track record in the past, it would have been reasonable to believe the ratio was due – perhaps overdue – for a fall.

Whether the ratio was “due” to fall isn’t something we can know for sure. Nevertheless, it has dropped significantly since last spring. From April through today, the ratio declined rather sharply – about 40% up to this point – and is now in the low 70s. Over the same period, the price of silver jumped roughly 80%. And there could be more to come if past silver price movements and apparent pro-silver factors are any indication.

At a present value of around 73, the ratio is about 14% above the average. That’s obviously higher than the 65 average, but not a lot higher. Could it really fall much further from here?

Here’s what we know from the two previous instances over the last 20 years when the ratio fell at least 40% from record highs: The metric kept falling well below 65 before it began to climb again. As I noted earlier, the ratio finally bottomed out at around 46 at the end of the 2003–2008 decline and sank as low as 31 by the end of the 2008–2011 drop.

This behavior suggests the ratio has demonstrated the potential (I emphasize potential) to continue falling significantly below its average once it has hit – or nearly hits – all-time highs. In the previously referenced Kitco article, commodities consultants CPM Group also made note of this capacity.

“Given the tendency of the ratio to overshoot this average both on the way up and on the way down, there seems to be a lot of juice left in the silver price rally based on just this one metric,” CPM noted, adding that “the ratio could slip to at least a low of 35 before stabilizing or moving higher.”

“This positions the ratio for a gain [in silver’s price] of another 50% from present levels,” CPM said. And that assessment of silver’s possible near-term prospects is in addition to forecasts suggesting it will strengthen considerably this year based on accommodative fiscal and monetary policy, which have shown the potential in recent history to be among the most telling pro-silver factors.

Keeping the Gold-to-Silver Ratio in Perspective

Anyone who considers using the gold-to-silver ratio as one tool to assist them in making silver buying decisions should remember this: There is no inherent relationship between silver and gold. As CPM Group puts it:

It should be understood that there is no magical number at which this ratio should stand. There are no physical, geologic, chemical, electrical, financial, or other reason why gold and silver should be expected to trade at a given relationship to each other.

Speaking for myself, this is one reason why I would not look exclusively to the ratio as an information source. I consider it to be a collateral piece of information that should be viewed within the broader context of the larger economic, political and geopolitical forces in play.

Still, it cannot be denied the largest sustained drops in the ratio over the last 20 years have coincided with significant gains in the price of silver. That includes the ratio drop which appears to remain in play right now. Does this bode well for silver in 2021? That remains to be seen. But as you decide what role silver might play in your portfolio, it’s not inappropriate, in my opinion, to give the ratio some consideration as one of the pro-silver factors you assess. That is, as long as you’re doing so in the broader context of the fiscal and monetary environment expected to persist through the foreseeable future.