Got Precious Metals? 4 Possible Alerts to the Worst-Recession-Ever 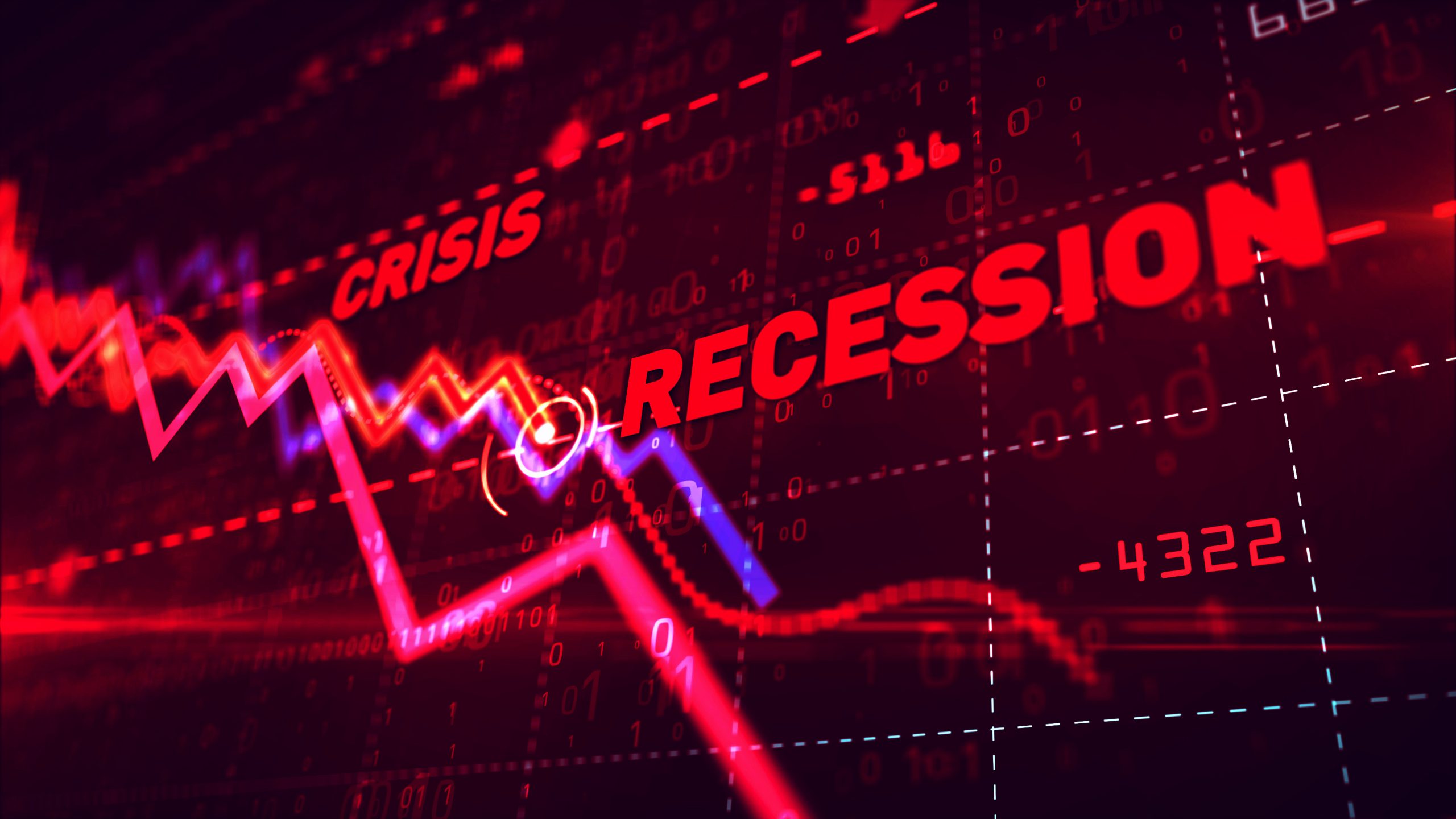 As you may have noticed, at Augusta we’re spending a lot of time lately checking out different sources that analyze conditions in the marketplace to get a sense of how to use precious metals in retirement portfolios. Various economists, analysts and other stakeholders have different opinions. And they base their opinions on possible indicators such as unemployment rate and low economic output, as well as consumer sentiment and the massive waves of fiscal and monetary assistance the Fed has thrown at the global health crisis in the last year.

I’m continually stunned by the number and caliber of experts who are weighing in on this—it says something about where our country has come economically in 2021.

In a recent article for Mises.org, independent analyst Jon Wolfenbarger of BullandBearProfits.com details how “weak economic fundamentals” actually have characterized the U.S. economy for much of the 21st century.1

Wolfenbarger says those anemic fundamentals represent just one of four reasons why he believes the next recession will be even worse than the 2008 Great Recession.

Here are his other three reasons:

In his article, Wolfenbarger doesn’t go as far as to suggest what preparatory steps retirement savers might take to help defend their savings from the effects of the next recession. But it’s worth noting precious metals (gold and silver) have shown the capacity to thrive under significantly adverse economic conditions. As a matter of fact, precious metals strengthened considerably during the years of the Great Recession that Wolfenbarger cites as the recession “standard” up to this point.

It’s not possible to know if gold and silver will thrive that way again against the backdrop of a future downturn. But it also is not unreasonable in my view for savers to at least consider the possibility that precious metals could help mitigate the effects of a recession on one’s hard-earned savings.

Wolfenbarger begins making his case with a discussion of what many see right now as a slam-dunk piece of evidence that trouble lies ahead: the broad value of equity assets.

And Wolfenbarger is hardly alone in his assessment. Another analyst that’s seeing this is Binky Chadha, Deutsche Bank’s chief equity strategist. He recently penned a note demonstrating how the values of equity markets right now are “historically extreme” on the basis of practically every metric, including “trailing and forward price to earnings (P/E).”3 If you have time, check out that article. It’s very interesting.

Wolfenbarger reminds us that real estate is an equity asset as well, and that it, too, is sitting at a significantly high valuation. According to the S&P CoreLogic Case–Shiller U.S. national home price index, home prices rose 18.6% annually in June.  CNBC says that’s the biggest year-over-year jump in the history of the index, which dates back to 1987.4 Perhaps even more notably, home prices across the nation now are 41% higher than they were at their previous 2006 peak, just before the onset of the housing crisis that directly led to the 2008 Great Recession.

Recession Alert #2: Economic Fundamentals Have Been Weak for Decades

No one will argue against the idea that much of the economic weakness we’re seeing is attributable to global health crisis fallout. And, yes, the government and the Fed have infused unprecedented levels of fiscal and monetary assistance into the nation’s economic engine for over a year now, but concerning signs persist.

Actually, Wolfenbarger said there’s been a much bigger, much more chronic problem bedeviling America’s output for the last two decades. It’s a problem that he says has significant implications for the next downturn: “All of the taxes, regulations, and other government interventions in the economy in recent decades have created a weaker and more fragile economy that will make the next recession even worse.”

Evidence of that economic fragility can be found in much-weaker industrial output this millennium, as the analyst details. United States industrial production grew at 3.9% annually from 1920 to 2000, but it now is a total of only 8% higher than the 2000 peak and even 1% lower than the peak in 2007. 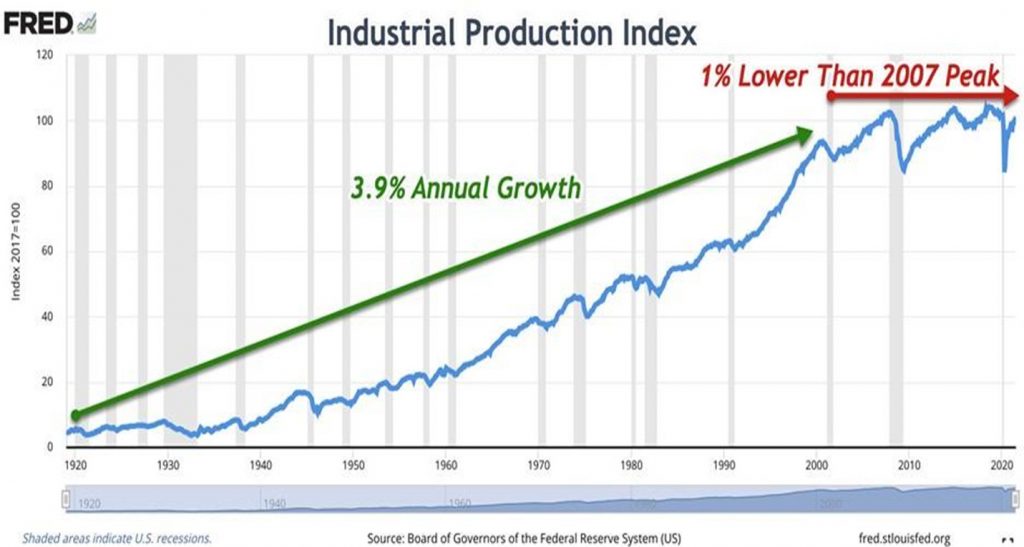 “Excessive debt has been the problem with every financial crisis in history due to prior money creation out of thin air,” Wolfenbarger writes, “so the next one promises to be one for the history books, given these unprecedented high debt levels.”

What debt levels is he referring to? Take your pick.

And to be clear, the metrics in that list that aren’t listed as “records” are almost records. The bottom line is that the mountain of debt nations, companies and households are sitting on now could lead quickly to massive debt crises when the next downturn strikes, significantly worsening the next recession.

It’s no secret the Fed largely has assumed a highly accommodative monetary policy posture since the 2008 financial crisis (Great Recession). This made it possible for the central bank to infuse lots of created money into the financial system and keep interest rates at historic lows. Right now, the Federal Funds rate is at a mere .25%.

One of the standard weapons the Fed deploys to fight a recession is the lowering of interest rates. The ideas is to help create liquidity and stimulate economic activity. But Wolfenbarger notes a chronically easy-money stance means the Fed effectively will have no room to cut rates when the next recession begins, especially with inflation gaining traction.

Last year, Mark Spindel, former deputy treasurer at the World Bank, told Bloomberg that “there is very little central banks can do” in the way of anti-recession measures with rates so low. “They are out of optimal monetary policy tools,” he added. And economist David Beckworth – also speaking to Bloomberg – agreed the Fed is “running low on ammunition” particularly in light of its aversion to using negative interest rates and suggested that “it does seem like they are going to be in a bind in a next recession.”10

Should Precious Metals Be a Part of Your Recession-Defense “Action Plan”?

Wolfenbarger, in his article, stops short of suggesting ways savers might prepare to fight effects of the next sharp downturn on their holdings. But one possible option, of course (as you know if you’ve been reading my blogs), is the addition of physical precious metals to a retirement saver’s asset base.

In fact, one of the best examples of precious metals’ capacity to favorably respond during a severe recession took place during what we like to call the 2008 financial crisis – the Great Recession. From 2008 to 2011, as the recession’s effects persisted, gold appreciated 160% and silver soared nearly 400%. And from January 1970 to January 1980, the decade of the “Great Inflation” and three recessions, gold and silver skyrocketed 1,500% and 2,100%, respectively.

It’s never too early to implement a recession-defense “action plan” as a part of your savings regime.

As Jon Wolfenbarger says, “While the exact timing of the next recession is unknown, given the potential magnitude, now is the time for people to start preparing for it.”

We obviously can’t know now if gold and silver will rise as dramatically – or even at all – if another major recession unfolds. But you can learn more about how gold and silver potentially can help mitigate recession risk – just give Augusta Precious Metals a call at 800-700-1008 to request our free guide.

When you call, be sure to ask for more information about the free one-on-one web conference available through Augusta’s education department. This eye-opening presentation has proven popular with many retirement savers interested in learning how precious metals can help them secure their retirement goals.

As a matter of fact, one of those precious-metals-champion retirement savers is none other than hall of fame quarterback Joe Montana. Joe was so impressed by what he learned during the web conference that he not only became a highly satisfied Augusta customer but insisted on serving as our corporate ambassador, as well. Intrigued? Then, by all means, please call today to learn more.