A few weeks ago, I wrote an article about self-directed IRAs that mentioned the growth of alternative assets. There are, I believe, several reasons why alternative assets are gaining fans. In my opinion, one of the biggest has to do with what appears to be an increasingly unsettled, less predictable and much more complex economic and geopolitical environment. This environment has created numerous challenges for traditional long-term savings paradigms in recent years and some alternative assets have managed to thrive.

The performance of gold and silver since the beginning of the new millennium is one example of alternative assets that have thrived. Although generally regarded as strategic “niche” assets best employed during specific periods of economic and geopolitical turmoil, gold and silver also have appreciated significantly over the last 20 years. Since January 2001, the price of silver climbed 445%, while gold gained roughly 540%.

In my opinion, the performance of gold and silver over this period partly serves as a testimony about the greater challenges economies and markets have faced since 2001. Some experts, including legendary hedge fund manager Ray Dalio, believe these sorts of challenges will persist.1

If that happens, it’s reasonable to consider the possibility that alternative assets often-uncorrelated with traditional markets and assets could thrive as more mainstream assets into the future. Among the net effects could be a long-term viability of gold and silver that may be attributable at least in part to a chronically turbulent global economic and geopolitical environment.

Performance of Gold vs. Silver, January 2001 to April 2021
(Chart Courtesy of StockCharts.com) 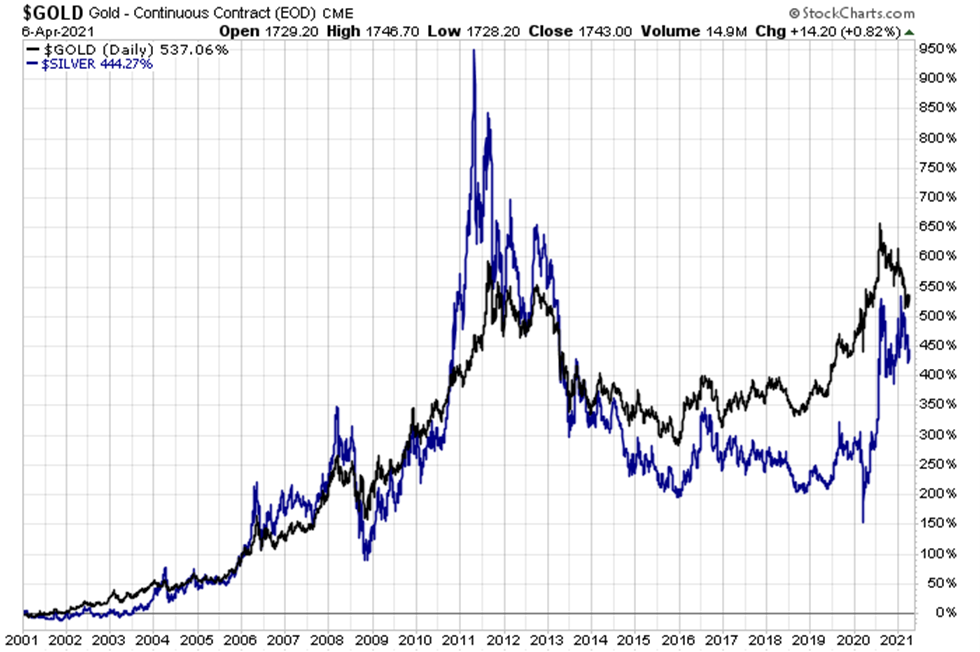 The chart shows the 445% appreciation in silver and 540% appreciation in gold over the last 20 years I referenced earlier. But it also is clear from the graphic that their path upward during this period has by no means been steady and linear. You probably can surmise from the chart that many friendly – and a few unfriendly – metals influences have arisen during the previous two decades.

A more detailed understanding of what could have moved gold and silver prices up and down since 2001 may help clarify the possible sources of precious metals’ overall strength from that time. It also might help explain why some see a more chronically problematic economic and geopolitical environment going forward.

Let’s start at the beginning. The more measured rise in metals from 2001 to 2008 corresponds to a period of time when the dollar index fell roughly 40%, a collapse largely attributable to a U.S. trade deficit that basically doubled during that period.2 There were a host of additional influences during this period that could be seen as favorable to metals, including the lingering effects of the 2000 dot-com crash, as well as, of course, 9/11 and the subsequent intensification of global geopolitical instability.

The even-sharper rise in gold and silver from 2008 to 2011 corresponds with the onset and spread of the global financial crisis, and the associated efforts by the Federal Reserve and U.S. government to “fix” it. Although both metals exhibited some downward volatility at the very beginning of the tumult, that’s not atypical behavior in the early stages of crises. Panic-driven selling of practically all assets can be characteristic when crises first unfold.

When the initial shock wears off, a semblance of calm can return. In recent history, this regained composure has been a function of large helpings of drastically accommodative monetary policy and free-spending fiscal policy designed to help keep the nation’s economic ship righted. We saw the enaction of such policies during the financial crisis. And metals often will surge against the backdrop of those monetary and fiscal initiatives – again, as they did here.

You may recall that in addition to then-record levels of deficit spending logged from 2009 to 2012, the Federal Reserve introduced quantitative easing (QE) – a particularly unconventional form of accommodative policy – for the first time in late 2008 and applied it again in 2010.

From 2011 to 2018, gold and silver’s fortunes reversed somewhat. During those years, the dollar index strengthened more than 30% and financial markets improved as a measure of economic confidence returned – along with investors’ taste for risk assets. Sure enough, you can see from the chart that both gold and silver fell from their 2011 peaks during these years of a strengthening dollar.

After that period of a strong dollar, macroeconomic trouble soon lurked again, and precious metals responded the way I would have expected them to based on my premise. Concerns about the burgeoning trade war with China became particularly pronounced toward the end of 2018. As they did, worries grew about the functionality of the global economy.

In the last quarter of 2018, markets sank and metals surged. Six months later, in June 2019, a declaration by the Federal Reserve that interest rates would head back down seemed to energize metals further. The onset of the pandemic in 2020 was accompanied by firm commitments of easy money and a return of record deficit spending – and metals continued strengthening.

My assessment: There has been no shortage of domestic and global turmoil since 2001. Much of this turmoil looks to have generated positive energy to one degree or another for precious metals. We see sharp spikes among gold and silver at specific periods over the last 20 years, and a more fundamental, longer-term strengthening of metals, as well.

In the previous section, I focused on what I consider to be the more influential factors that appear to have cued gold and silver’s rise since 2001. However, there’s a wide array of other economic and geopolitical influences that potentially have helped catalyze metals’ movements over the last 20 years. And when we look at those influences, we find no shortage of seemingly obvious challenges to the economic order and fundamentally sound markets. Among them:

Alternative assets such as physical gold and silver often are seen as crisis assets. Historically, that status has suggested to savers that metals should be owned on a more selective basis, when crises are in full bloom. But what if varying degrees of crisis conditions are more regular features of the worldwide economic, geopolitical and sociopolitical landscape, as they seem to have been for the previous couple of decades? What could be the implications for gold and silver?

A common assessment is that such an environment could mean more ongoing energy for risk-off assets in general and precious metals in particular. I believe the economic and geopolitical backdrop of the last 20 years has been suggestive of such an environment. In my opinion, there’s little reason to think that environment will change in any material way through the foreseeable future.

I’m hardly alone in my speculation that a less predictable and potentially more metals-favorable environment will characterize the years ahead. A New York Times article last year detailed survey results that said roughly half of all Americans were seriously considering the purchase of gold.4 Several states now are moving toward using gold and silver to help diversify their reserve funds. Even central banks, of all places, have been loading up on gold to help safeguard their reserves.5

Tesla, one of the world’s most interesting and innovative companies, declared in its most recent 10-K filing with the Securities and Exchange Commission that gold was now an eligible asset for the investment of excess cash. And while not identifying precious metals specifically, results of a recent survey by alternative assets analytics firm Preqin reveal that 81% of respondents “expect to increase allocations to alternatives” because of “the promise of…diversification and lower correlation with public markets.”6

To be sure, no one can predict the future—including the future of the U.S. economy and precious metals prices. There’s no way of knowing if metals’ performance of the last 20 years will continue or if the same or similar influences believed to have impacted the price of gold and silver will be evident going forward. At the same time, I would suggest it’s not wholly inappropriate to at least acknowledge the apparent overall strength of gold and silver against the backdrop of the wide array of economic and geopolitical challenges since 2001. And should such challenges persist, it’s reasonable to consider the possibility of mainstream gold and silver.

3 Michael Dimock and Richard Wike, Pew Research, “America is exceptional in the nature of its political divide” (November 13, 2020, accessed 4/8/21).