High Inflation or Recession: Analyst Says Gold’s Got You Covered Either Way 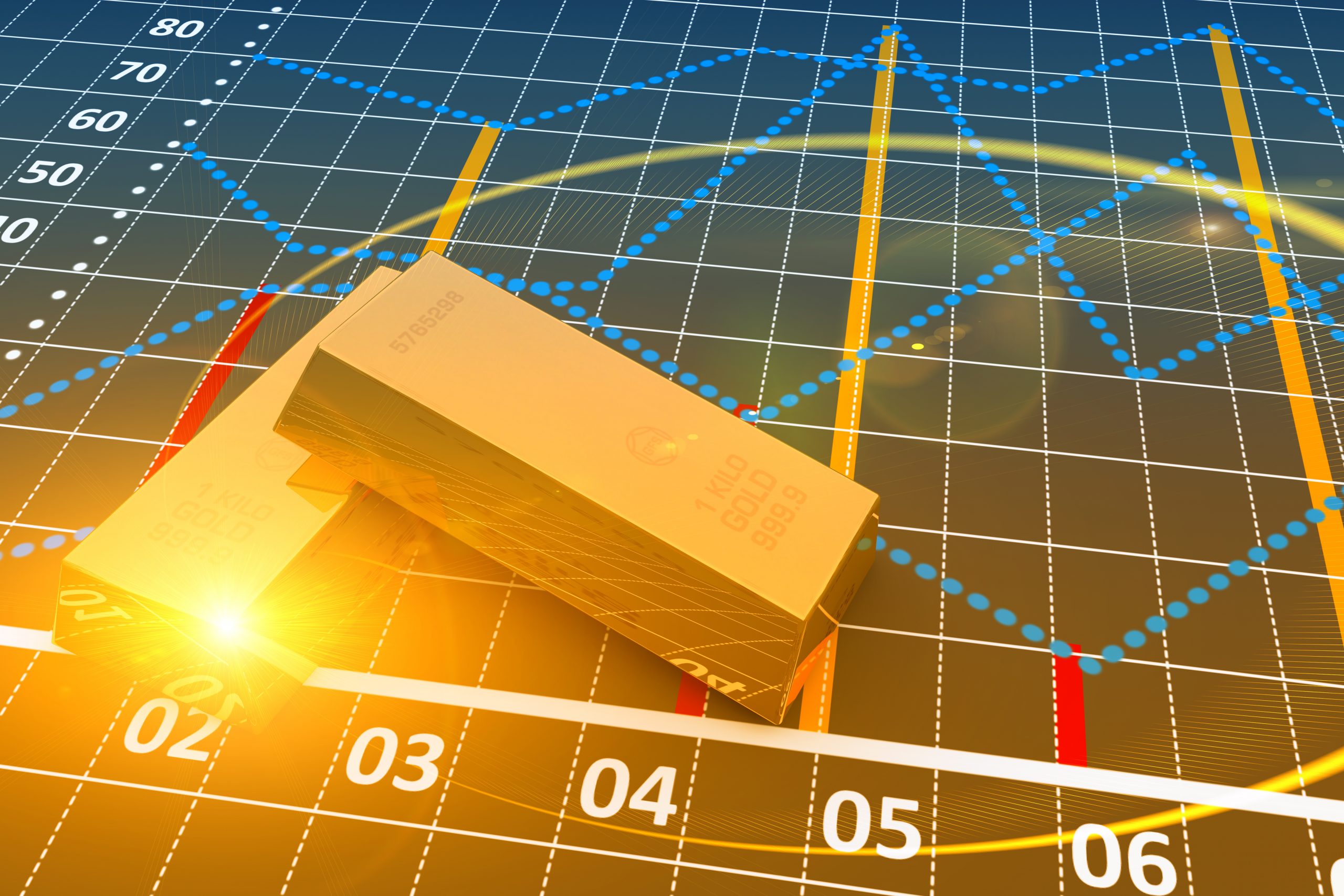 A funny thing is happening on the way to higher interest rates: The price of gold and silver also is moving higher. Since the beginning of the month, the spot gold price has increased by 4% and silver has jumped by about 4.5%. And this is amid all the talk of rate increases coming faster and in larger quantities.

For those familiar with the underlying investment fundamentals of precious metals, that’s curious. Metals generally aren’t fond of higher rates. One reason is that higher rates typically translate to a mightier dollar. Safe-haven assets such as gold and silver tend to retreat in the face of growing dollar strength.

Another reason is that rate hikes can increase the “opportunity cost” of holding metals when higher-yielding investments become more available. As interest-bearing assets start to pay more, the fact that gold and silver don’t pay interest can sometimes prompt investors to look past them in spite of their inflation-fighting potential.

The point is that the interest-rate deck inherently is stacked against gold when rates look to be headed north. So why is gold receiving more – not less – love right now?

One common answer you’ll hear right now as to why the price of gold looks to be improving has to do with heightened geopolitical tensions related to the threat of a Russian invasion of Ukraine. But one well-known analyst says there’s more to it than that. He believes gold and silver are being recognized for their ability to thrive regardless of whether the Federal Reserve chooses to tolerate higher inflation or initiates sharp, recession-risking rate hikes.

Given metals’ demonstrated capacity to strengthen in the face of both conditions, his outlook makes sense to me. So it also makes sense that retirement investors might give gold and silver a careful look right now as threats of both runaway inflation and a significant economic downturn continue to grow.

Regular readers of this blog will know I’m not sold on the idea that our economy is in store for not only an overall Fed balance sheet reduction but a steady diet of higher interest rates over the next two years. The Federal Reserve – and, most notably, Fed Chairman Jerome Powell – was reluctant until very recently to embrace an upward interest rate bias even as year-over-year inflation numbers started jumping nearly a year ago.

History suggests that raising rates sharply is the most effective way to rein in inflation. Inflation is now at a 40-year high (7.5%). So what’s the problem? If we’re overdue for an interest rate increase to catch that runaway inflation, let’s get started.

Unfortunately, it’s not that simple. The Federal Reserve may have found a renewed enthusiasm for steady rate hikes. Indeed, talk of a 25-basis-point rate increase in March has now given way to support for a 50-basis-point hike, with a total of six quarter-percentage-point increases now considered very possible in this year alone.[1]  But professional observers – and at least one Federal Reserve Bank president – are thinking through the potential consequences of those interest rate increases and concluding they don’t particularly care for what they see.

I recently talked about the significant historical association of Fed Funds rate increases with the onset of recession. And now a number of people are sounding the alarm to suggest meaningful interest rate hikes this time around will result in recession yet again – and that if we have to choose between inflation running hot for an extended period or a recession, we should make our peace with inflation.

Conor Sen of Bloomberg is one of those who says we’re better off with inflation over a recession that could wipe out economic growth. He readily acknowledges high inflation is hardly ideal. Still, he says that inflation “beats an unnecessary recession brought on by adhering to an arbitrary short-term target [the Fed’s oft-cited 2% inflation target].”[2]

The Bloomberg editorial staff – as a whole – agrees with him. Saying that “open-mindedness, patience and gradualism remain the right strategy” in the matter of Fed rate-tightening, Bloomberg editors warn, “A tightening of policy that takes markets by surprise could crush asset prices and run the risk of pushing the economy back into recession.”[3]

And it’s not just financial media commentators registering their concerns over the prospect of a more stringent Fed rate-tightening posture. In an appearance on CBS’ “Face the Nation” last Sunday, San Francisco Federal Reserve Bank President Mary Daly indicated she’s not yet on board with a 50-basis-point rate increase next month.

“So I look at the data, and I see that it is obvious that we need to pull some of the accommodation out of the economy,” Daly said, “but history tells us with Fed policy that abrupt and aggressive action can actually have a destabilizing effect on the very growth and price stability that we’re trying to achieve.”[4]

So chronically high inflation and debilitating recession are emerging as two very-possible outcomes of “either/or” Federal Reserve policy maneuvering in the near term. And as they do, Peter Boockvar – analyst and chief investment officer at 8-billion-dollar Bleakley Advisory Group – suggests those investors with the foresight to have included precious metals in their portfolios will be in good shape no matter which eventuality comes to pass.

As a matter of fact, Boockvar’s enthusiasm for metals has been further invigorated by last week’s announcement that inflation reached a four-decade-high, as well as the central bank’s reaction that it could move to tighten more abruptly.

“I’ll use this as another opportunity to express my bullishness on gold and silver,” Boockvar said. “From here, either the Fed will tighten too much and growth slows that results in the Fed backtracking and that will be bullish for gold or the Fed will still be too slow in tightening, real rates will remain firmly negative and that will be positive for gold.”[5]

To his point, the price of gold and silver did strengthen significantly the last time the Fed started “backtracking” on interest rate hikes. You may recall the central bank made a sincere effort beginning in 2017 to boost rates after eight years of keeping them at or near record lows out of deference to the effects of the financial crisis. However, that higher-rate bias lasted only until the beginning of 2019. Investors’ confidence began to wane. Once the Fed Funds approached the 2.5% mark, concern grew that the still-fragile economy was headed back into recession. From the date the Fed announced a move back to lower interest rates – March 23, 2019 – to the end of that year, the price of gold and silver improved by 16% apiece.

Boockvar’s outlook and reasoning speaks to why I like metals as much as I do. Here you have two distinct possibilities for the economy’s near-term future: high inflation that continues for an extended period…or a recession that could result from the Federal Reserve moving too sharply on raising interest rates precisely to quash that inflation. Both scenarios could prove to be favorable for safe-haven assets such as precious metals, and the price of gold and silver more specifically.

Maybe you like what you’ve read so far and you’re interested in learning more about adding gold and silver to your portfolio. But how can you go about doing that without getting clubbed over the head by pushy salespeople making outrageous claims?

One option is to call Augusta Precious Metals at 800-700-1008. You’ll have all your questions answered by one of our friendly and knowledgeable customer success agents. You’ll receive a free guide packed with useful information just for calling. And you’ll find out about our free one-on-one educational web conference that discusses the challenges investors face as they work toward a secure retirement and how gold and silver can help you to overcome them.

It seems all but certain that interest rates will be heading upward in some measure. What remains unclear, however, is how high they ultimately will go and what the eventual economic consequences will be. Could we be facing an extended period of high inflation? Or a recession characterized largely by U.S. markets in upheaval? As market analysts such as Peter Boockvar note, either scenario could be a boon to precious metals. If you’re ready to talk about the way gold and silver could protect your portfolio no matter how things play out from here, I invite you to call Augusta Precious Metals today. We look forward to hearing from you.