Inflation Will Be a Problem for Years Says Federal Reserve 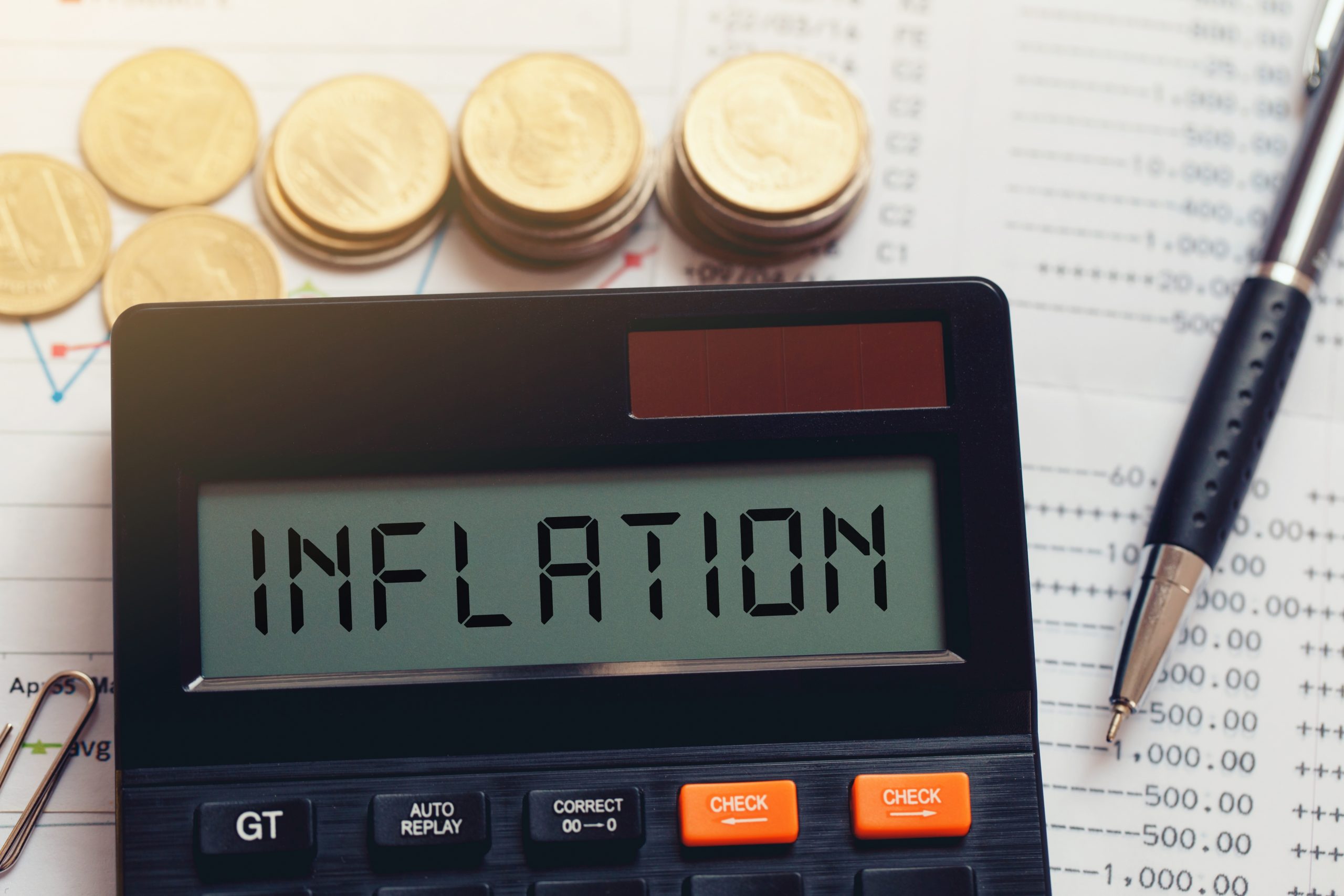 How are you getting on in the current era of higher inflation?

It was in April of last year that the year-over-year consumer price index (CPI) first jumped well above the “acceptable” 0% to 2% range in about a decade. You may recall speculation as to where U.S. inflation was headed from there often was dominated by talk that it would in fact be transitory – temporary, in other words.[1]

Unfortunately, not only did last April’s 4.2% CPI not prove temporary, rising prices have steadily worsened. Inflation now sits at 7.9%, the highest level in the last 40 years. And the increase is forcing many Americans to stretch their wallets in ways they’ve never had to before.

According to a recent Wall Street Journal article:

And food prices? Up over 8% in the past year, and even that may be low depending on what your grocery list actually looks like.[3] For example, beef prices rose more than 20% in 2021.[4]

There are few real signs at the moment that these higher prices will relent anytime soon. In fact, the Federal Reserve now is saying it expects outsized inflation numbers to last for years. That’s not a good place for any of us to be.

It’s a significant change in perspective for a Fed that until late November 2021 was rather vocal in declaring that the inflation we first saw perk up last April would be no more than transitory.[5] In my opinion, this shift in outlook by America’s central bank should have your attention. I believe it further underscores for retirement savers the importance of taking meaningful steps to combat the potentially withering effects of long-term inflation on the purchasing power of their nest eggs.

You probably heard the Federal Reserve hiked interest rates by 25 basis points last week. And when members of the Fed’s Federal Open Market Committee (FOMC) submitted their projections for inflation through the rest of the year and beyond, they revealed the central bank now sees inflation running above the Fed’s average target rate of 2% through the end of 2024.

According to the Summary of Economic Projections that emerged at the conclusion of the FOMC meeting, the Federal Reserve sees inflation averaging no less than 4.3% for the entirety of 2022. And looking out further, the Fed thinks inflation will average 2.7% in 2023 and 2.3% in 2024. This means – among other things – that the Fed does not see inflation settling back to the 2% average rate figure until 2025.[6]

As MarketWatch points out, these projections in the context of the Federal Reserve’s earlier forecasts suggest a significant misreading on the Fed’s part as to where inflation should be now. MarketWatch notes that a year ago the central bank projected 2022 inflation to average 1.9% and that as recently as four months ago the Fed thought inflation would average 2.6% this year.

“These are earthquake-like alterations for a conservative central bank that rarely makes big changes in its forecasts,” MarketWatch declared.

Some may find it notable that the Fed is using its preferred inflation-measuring index – the personal consumption expenditures price index (PCE) – to make these projections. The reason I say “notable” is that PCE inflation numbers tend to run lower than those represented by CPI – which has been accused of already understating actual inflation. A 2019 Wall Street Journal article, for example, made the case for why PCE “isn’t keeping pace” with other inflation indicators, including CPI.[7]

PCE is viewed by the Fed as a more reliable indicator of inflation. One reason for this is that PCE evaluates a wider range of expenditures than does CPI. Another reason is that PCE relies on surveys of businesses rather than those of consumers for price data, implying less subjectivity and greater accuracy in reporting. But others suggest that very difference is partly why PCE is not as accurate a measure for the inflation that individual Americans are experiencing in their personal spending regimes.[8]

Aside from which specific the Fed prefers to evaluate U.S. inflation data, here may be the bigger issue for you and me: We now are being told by the central bank to expect inflation well above the “acceptable” 2% level for the rest of this year. And that by itself is significant enough in my view. But according to at least one esteemed economist, inflation will persist for years at a much higher level than even the Fed’s recently revised projections indicate.

Let’s talk about that “cheerful” outlook.

Johns Hopkins Economist: Inflation Will Stay Between 6% and 9% for Years

The economist I am referring to is Steve Hanke, professor of applied economics at Johns Hopkins. In January, Hanke told Kitco News that he expects inflation to remain at its current significantly elevated level for years – and says we can thank the substantial growth of the money supply over the past two years for that.

Noting that the M2 money supply in the U.S. has grown nearly 40% since March 2020, Hanke flatly said, “It’s the money supply, stupid” in reference to what he says is the true cause of the inflation we’re seeing now. “If you have a surge in the money supply, you’re going to eventually – after a lag of 12 to 24 months – get inflation into the system.”[9]

So where does Hanke see U.S. inflation through 2024? Where it’s at right now, basically.

Hanke is not the only one who sees high inflation through the foreseeable future. According to Kiplinger, the well-known publisher of business forecasts and personal financial advice, inflation will stay significantly elevated at last through the end of this year.

“The surge in gasoline prices this month will boost March inflation to near 10% when the figures are released next month,” Kiplinger says. “The inflation rate will likely remain high for the rest of the year, ending at 6.5% or so in December.”[10]

To what level inflation ultimately grows and for how long it remains significantly above the Fed’s 2% target remains a question mark. But this much we do know: There is a growing consensus that substantially higher prices could be with us through at least the end of 2022 – and that prices could remain above the Fed’s long-term inflation target for years.

If chronically higher prices persist for a lengthy period, practically all Americans could be disadvantaged to one degree or another. But it just might be the folks living on savings – such as retirees and those approaching retirement – who are among the most vulnerable to a loss in purchasing power cued by inflation. Indeed, a December 2021 survey by Allianz Life Insurance Company of North America revealed that fully one-quarter of Americans believe rising inflation is the single greatest risk to their retirement plans.[11] And so that particular demographic – which may well include many of you – might consider the implementation of an inflation-defense strategy to be a priority.

Should Gold Be Part of Your Strategy to Help Mitigate Inflation’s Effects?

Retirement savers will have to decide for themselves how to best prepare for the challenges posed by ongoing inflationary pressures. Precious metals have long been viewed as a hedge against inflation. And right now, an intensification of inflation concerns stemming from the Russia-Ukraine conflict are prompting savers around the world to pour money into gold.[12] You may have heard that gold prices have broadly strengthened over the past couple of months.

Does this mean you should do the same?

Only you can answer that question for yourself. But if you do see a role to be played by gold and/or silver in your efforts to hedge retirement savings against the effects of inflation, I invite you to talk it over with the folks at Augusta Precious Metals.

When you call Augusta at 800-700-1008, you’ll speak to a friendly, knowledgeable customer success agent. This representative will patiently answer all of your questions and engage you in an enjoyable, hassle-free conversation about gold and silver that will be completely free of unpleasant fear-based sales narratives and outrageous claims.

And here’s more good news: You can look forward to receiving a free, information-packed guide about metals and gold IRAs when you call. You also will learn about Augusta’s free one-on-one educational web conference designed by our on-staff, Harvard-trained economist, Devlyn Steele. This presentation details the challenges – like inflation – savers can face as they prepare for retirement and how including precious metals among their assets might help mitigate those challenges.

Where does inflation go from here? We can’t know for sure, of course. But as the Fed revises its projections upward and other economic experts forecast significantly higher consumer prices for years to come, it’s worth considering if you should take meaningful steps to help preserve the purchasing power of your retirement savings. If you conclude that you should, and you decide adding precious metals to your base of assets will be one of those steps, I invite you to call Augusta and talk about it. We look forward to hearing from you.