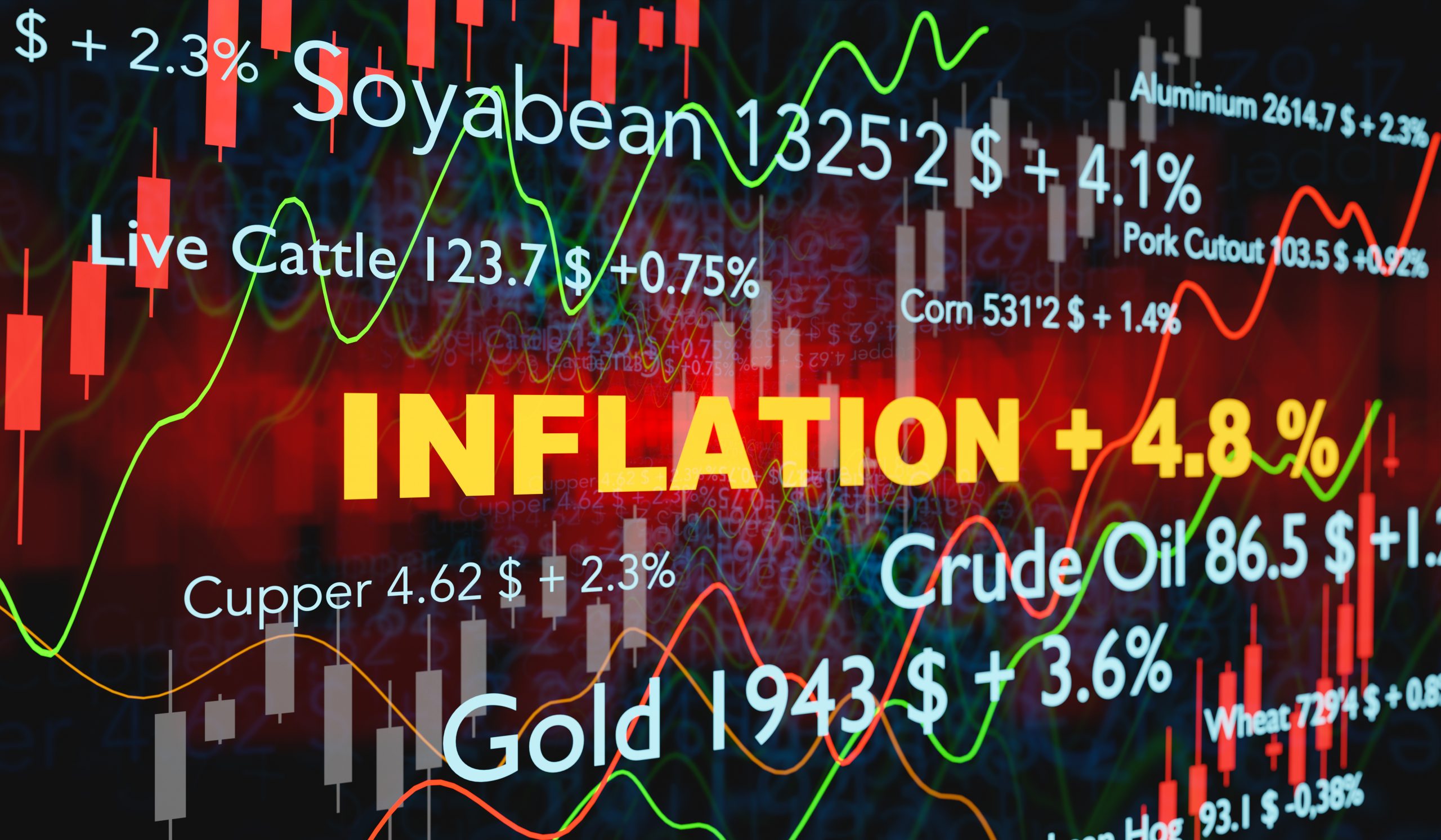 It seems that after nearly 13 years of little-to-no inflation, price increases have made a strong comeback this year – and that’s a key indicator of inflation. In April, the year-over-year Consumer Price Index (CPI) surprised those who watch the economy and markets by jumping to 4.2%. At that time, it was the highest it had been since September 2008. And it has only gone up from there. September’s Consumer Price Index was 5.4%.

The Federal Reserve, America’s central bank, has been persistent in saying it believes inflation is “transitory,” a word the central bank has come to rely on to publicly to suggest that upward price pressures are relatively fleeting and, in this case, resulting purely from the resumption of normal business operations after the worst of the pandemic was past us. But Bob Doll, chief investment officer at Crossmark Global Investments, is just one of many economic observers who believe that way of thinking is standing on failing legs. “If you know anybody who doesn’t have to live somewhere, doesn’t eat any food and doesn’t use energy, then inflation is maybe not a particular problem,” Doll told CNBC recently. “But come on.”[1]

It turns out some at the Fed readily agree, including Atlanta Federal Reserve President Raphael Bostic.

“It is becoming increasingly clear that the feature of this episode that has animated price pressures — mainly the intense and widespread supply chain disruptions — will not be brief,” Bostic said recently. “Data from multiple sources point to these lasting longer than most initially thought. By this definition, then, the forces are not transitory [emphasis added].”[2]

Judging from that data and those comments from experts who presumably have a solid background in how the economy works, chronic inflation appears it may be here to stay for a while. Recent survey results imply that retirement investors are acutely worried about the effects of both domestic and global inflation on their hard-earned savings.

They should be, in my opinion. Even modest levels of inflation can drastically reduce the purchasing power of the dollar over time. This reality is particularly concerning to retirees who by definition are no longer working and earning money.

Fortunately, one asset has demonstrated the capacity to help investors protect their retirement savings against the effects of destructive inflation: precious metals.

Billionaire investors such as Naguib Sawiris and John Paulson are publicly declaring their affection for gold as a global inflation hedge amid the current climate of rising consumer prices.[3] But let me be clear: You don’t need to be a billionaire to have inflation fears or benefit from precious metals’ inflation-fighting potential. At the end of the day, inflation wrecks the purchasing power of all dollars – yours included.

Survey: 71% of Retirement Investors Say Inflation Is Their Biggest Worry

Lately, I’ve noticed there is no shortage of surveys revealing that inflation is very much on the minds of retirees and retirement-age investors. Hardly a surprise, considering the degree to which consumer prices have soared in recent months.

What is a surprise, however, is just how seriously America’s seniors view inflation currently. Retirees now see inflation as their top financial concern, according to a survey by Personal Capital and Kiplinger’s Personal Finance.[4] In fact, 77% of retirees say their biggest worry in the foreseeable future is a loss in purchasing power. They worry about this even more than some other famous retiree financial worries: e.g., the rising cost of healthcare (74%) and the solvency of Social Security (71%).

According to results from a Global Atlantic Financial Group survey, 71% of retirement-age investors believe inflation will negatively impact their nest eggs.[5]

That’s not all. The same survey says 46% of investors think the combination of inflation and low rates means they may not have a reliable income in their golden years.

Paula Nelson is the co-head of individual markets at Global Atlantic. In a statement on the survey results, she said, “Those on the cusp of retirement are paying close attention to economic issues such as inflation and low interest rates, and they recognize that it might be a good time to revisit their retirement strategies.”

Inflation – Plus Low Rates – Could Be “Gold” for Precious Metals

But I wonder: What will be the result of retirement investors “revisiting” their retirement strategies? Will they just rearrange the chairs on the same sinking ship? Or will they recognize the ship is in fact doomed and it might be a good idea to find another boat to jump on to finish their journey to a secure retirement?

For retirement investors, when trouble looms, I always believed one of the biggest challenges is to think outside of the mainstream assets they’ve become so comfortable with. When they run into a problem with their savings regime, they typically look for an answer in traditional assets that have always made up most of their holdings: equities, bonds and cash. In one sense, that’s obviously understandable. After all, these are the assets they’re most familiar with – the assets they’ve had the most exposure to courtesy of popular financial media as well as the mainstream financial advisor community.

However, there’s a broad array of obstacles retirement savers are expected to encounter in the years to come. It might make sense now for them to consider some alternative assets in addition to the traditional ones. These kinds of assets should include investment vehicles that have demonstrated a potential to thrive in the face of inflation. Physical precious metals are examples of such assets.

As it happens, precious metals are particularly well-suited to thrive during periods characterized by rising U.S. consumer prices and lagging interest rates, such as the stagflationary 1970s. These conditions are expected to persist through the foreseeable future. When nominal rates don’t match or exceed inflation, the result is negative real rates (nominal rate minus inflation rate) – and, based on historical numbers, those could be a boon for the price of precious metals.

However, when rates aren’t hiked enough to “catch” inflation, then negative real rates remain in place. So, these negative real rates can help enhance the upside potential of precious metals. One of the best historical examples of this dynamic in action was observed in 1970s levels of inflation (the decade came to be known as the “Great Inflation”). Back then, inflation soared and interest rates didn’t keep pace consistently until the early 1980s. The result? From January 1970 to January 1980, gold and silver skyrocketed 1,500% and 2,100%, respectively.

Protect Your Savings from the Inflation Crisis with Gold and Silver

In spite of the worrisome high inflation signs, I think it’s unlikely we’ll see the near-double-digit high inflation rates that horrified consumers (and politicians) in the Great Inflation of the 1970s. But smart retirement savers know even a modest level of chronic inflation can wreak havoc on the purchasing power of their money over time. For example, a 3% inflation rate over a 20-year period can turn a nest egg of $500,000 into just $277,000 in terms of buying power. Looked at another way, the retirement saver who has saved $500,000 by today will need that account to equal more than $900,000 in 20 years just to preserve his current level of buying power.

This means savers should think of a defense against inflationary pressures as a part of their retirement planning. I suggest one component of that scheme could be “real” assets that have the demonstrated potential to strengthen in the face of inflation – assets such as precious metals.

And before you write off the prospect of including metals among your assets, it might interest you to know that institutional investors – the world’s biggest asset management firms – anticipate relying on precious metals a good deal more in the foreseeable future.

As a matter of fact, a recent joint study by Greenwich Associates and the World Gold Council (WGC) revealed that roughly 40% of those institutional investors currently owning gold expect to increase that allocation within the next three years. Moreover, of those institutional investors that do not own gold right now, 40% of them say they plan to buy it in the next three years.[6]

And one of their biggest reasons for owning it? Inflation. “I think with the Fed’s accommodative monetary policy, we will likely see inflation in the future and slower growth, which gold as investment will serve as a diversifier for the portfolio,” says one pension fund manager surveyed by Greenwich and WGC.[7]

If you’re one of the many retirement savers seriously concerned about a possible new financial crisis and the potential impact of inflation on your financial security, maybe it’s time to have a talk with the knowledgeable professionals at Augusta Precious Metals. When you contact Augusta at 800-700-1008, you’ll receive a free guide. You also will have the chance to learn more about our live one-on-one web conference hosted by a member of Augusta’s education department. This presentation has informed and empowered savvy retirement investors all across the country – including hall of fame quarterback Joe Montana!

So, yes, inflation is back. But you don’t have to stand by idly while it devours your savings. Call us to learn more.