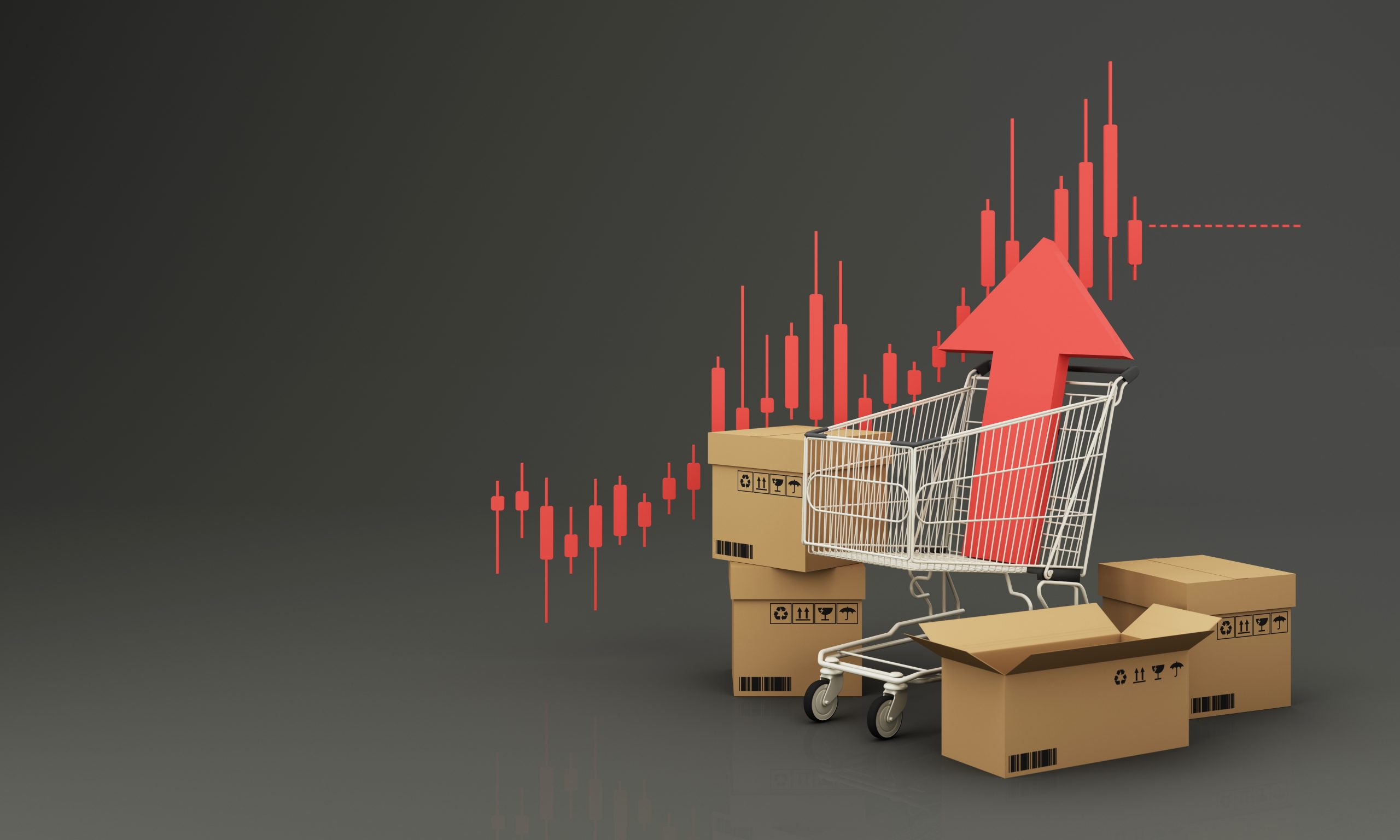 Three weeks ago, the U.S. Federal Reserve raised interest rates for the first time in more than three years. The size of the increase isn’t particularly momentous – just 25 basis points. But it’s expected there will be six more increases before 2022 is finished. And per the Fed’s projections, we should look for four additional rate hikes in 2023. That represents a total of 11 interest-rate increases this year and next that will push the Federal Funds rate to 2.75% by the time we ring in 2024.[1]

That sounds like a lot of rate hikes, and it is. And the rate anticipated to be reached by the end of next year represents a 1,000% increase over the level at which the Fed Funds rate sat when the most recent rate bump was initiated. It certainly sounds as though we’ll be contending with startlingly high interest rates in the near future, does it not? My guess is if you told the average person that interest rates will be 1,000% higher next year, they would think you’ve lost your mind.

But it’s a testimony to how low interest rates have been that 11 increases translating to a 1,000% increase pushes the Federal Funds rate to a mere 2.75%. Why do I say “mere”? Because even as high as you might think 2.75% is compared to where the Fed Funds rate has lingered for most of the past 20 years, it still is well below the 5.75% figure the rate has averaged over the previous 50 years. And it’s almost 90% below the high reached in 1980.[2]

Experts say the current interest-rate outlook could be problematic for a Federal Reserve trying to reduce inflation that now is at its highest level in more than 40 years. Research analysts at global banking giant Credit Suisse went as far as to say in a recent note that despite appearances, the Fed’s planned rate-hike schedule is “unlikely to sufficiently tame the current torrid pace of inflation.”

I will discuss the inflation and interest-rate viewpoint of Credit Suisse analysts in greater detail shortly, including where they say the Fed Funds rate should be right now. But what may be particularly important for retirement savers is to recognize that projections of persistently high inflation continue to mount – and that it might not be unwise to consider implementing measures that could help them hedge their savings against the effects of chronically higher prices.

Credit Suisse Analysts: Fed Funds Rate Should Be at 9.8% to Bring Down Inflation

It appears to me that Credit Suisse is not terribly impressed with the Fed’s plans to reduce inflation. In the same note in which Credit Suisse said those plans likely wouldn’t “tame” current inflation, the multinational financial services firm said following the central bank’s recent rate hike that “not only is the rate too low today, but it will likely be too low even after the Fed completes its projected rate hikes.”

Did Credit Suisse arrive at this conclusion based on a discretionary opinion? No – or, at least, not entirely. According to MarketWatch, Credit Suisse’s chief U.S. equity strategist and head of quantitative research Jonathan Golub and his associates indicated they were relying in part on something called the “Taylor Rule” to decide that the Fed’s current rate-hike plans are inadequate to bring down inflation.

I don’t want to get too far into the weeds on the Taylor Rule, partly because the central component is an econometrics-rooted mathematical equation and I just know how people love those (yes, that’s sarcasm). In a nutshell, the Taylor Rule is a monetary policy guideline for where the Federal Funds rate should be based on the levels of inflation and economic output (GDP). According to the rule, the higher inflation and/or output is, the higher the Fed Funds rate should be. Conversely, the lower inflation and/or output is, the lower the Fed Funds rate should be. The Taylor Rule is the creation of an economist named John Taylor (surprise) and is supposed to remove discretion from interest rate decisions. If you want to delve further into the details and mechanics of the rule, you can do so here.[3]

And here it is: According to Credit Suisse’s application of the Taylor Rule, the Federal Funds rate right now should be at 9.8%. That obviously is much higher than the level between 0.25% and 0.5% where it sits right now. In fact, as Golub points out, the Fed Funds rate still won’t be anywhere near 9.8% two years from now if the central bank sticks with its projected size and schedule of rate hikes.

Even without the Taylor Rule’s guidance, it seems difficult to envision how inflation will be reined in by a rate-increase regime that won’t see Fed Funds reach even 3% by the end of next year.

Are We Looking at a “New Normal” in Higher Inflation?

The level of Fed Funds rate increase suggested by Credit Suisse is reminiscent of how former Federal Reserve Chairman Paul Volcker finally lassoed the infamous high inflation that characterized much of the 1970s and early 1980s. The Volcker-led central bank aggressively raised the Fed Funds rate from 11% in August 1979 – when Volcker took office – to 20% by the end of 1980. This tough approach to containing inflation ultimately proved effective in bringing down prices. But the significant increases also triggered two recessions, the second of which saw unemployment rise to nearly 11%.[4]

And the possibility of recession is the other side of the higher-interest-rates “coin.” This is something I’ve discussed frequently. There is no shortage of data suggesting recessions reliably follow increases in the Fed Funds rate.[5] One can only imagine what impact a single rate hike from 0.25% to 9.8% – where Credit Suisse says rates should be to effectively fight inflation – would have on our economy right now, especially with household debt at record levels.[6]

Does this mean Americans should view higher inflation as a “new normal”? We can’t know that, of course. But we do have the projections of Credit Suisse analysts and others – including the Federal Reserve – that the inflation rate will remain an issue for at least the next couple of years. And those projections may be enough to convince retirement savers it could be smart to take steps toward mitigating the effects of long-term inflation on their holdings.

Ultimately, each person will have to decide for themselves how best to go about alleviating the effects of inflation on their savings. Inflation-hedging strategies take a variety of forms and can include the addition of physical gold and silver to one’s holdings.

For those retirement savers who’ve wanted to learn more about gold and silver assets but have been unsure where to begin, I suggest contacting Augusta Precious Metals. When you call Augusta at 800-700-1008, you’ll speak not with a salesperson applying high-pressure sales tactics but with a friendly, knowledgeable customer success agent. Chances are good that you’re going to have a lot of questions about buying and owning metals. Fire away. The customer success agents at Augusta enjoy helping retirement savers as they go about the process of deciding if owning precious metals makes sense for them.

In addition to enjoying a pleasant, hassle-free conversation about gold and silver assets, you’ll receive an information-packed guide about metals and gold IRAs. You also will learn about Augusta’s free one-on-one educational web conference. Designed by our director of education and on-staff, Harvard-trained economist, this presentation discusses the array of challenges that retirement savers can face as they travel the road to financial independence. But this unique web conference does more than just outline problems. It also details how hedging and diversifying savings with precious metals could help to overcome those challenges.

Significant levels of inflation may not be here to stay. But despite their best efforts, even experts cannot be sure for how long Americans will be forced to contend with higher prices as measured by the consumer price index (CPI). If you think it’s time to take a stand against inflation on behalf of your savings with physical gold and silver, I invite you to call Augusta to learn more. We look forward to hearing from you.