Listen to the article 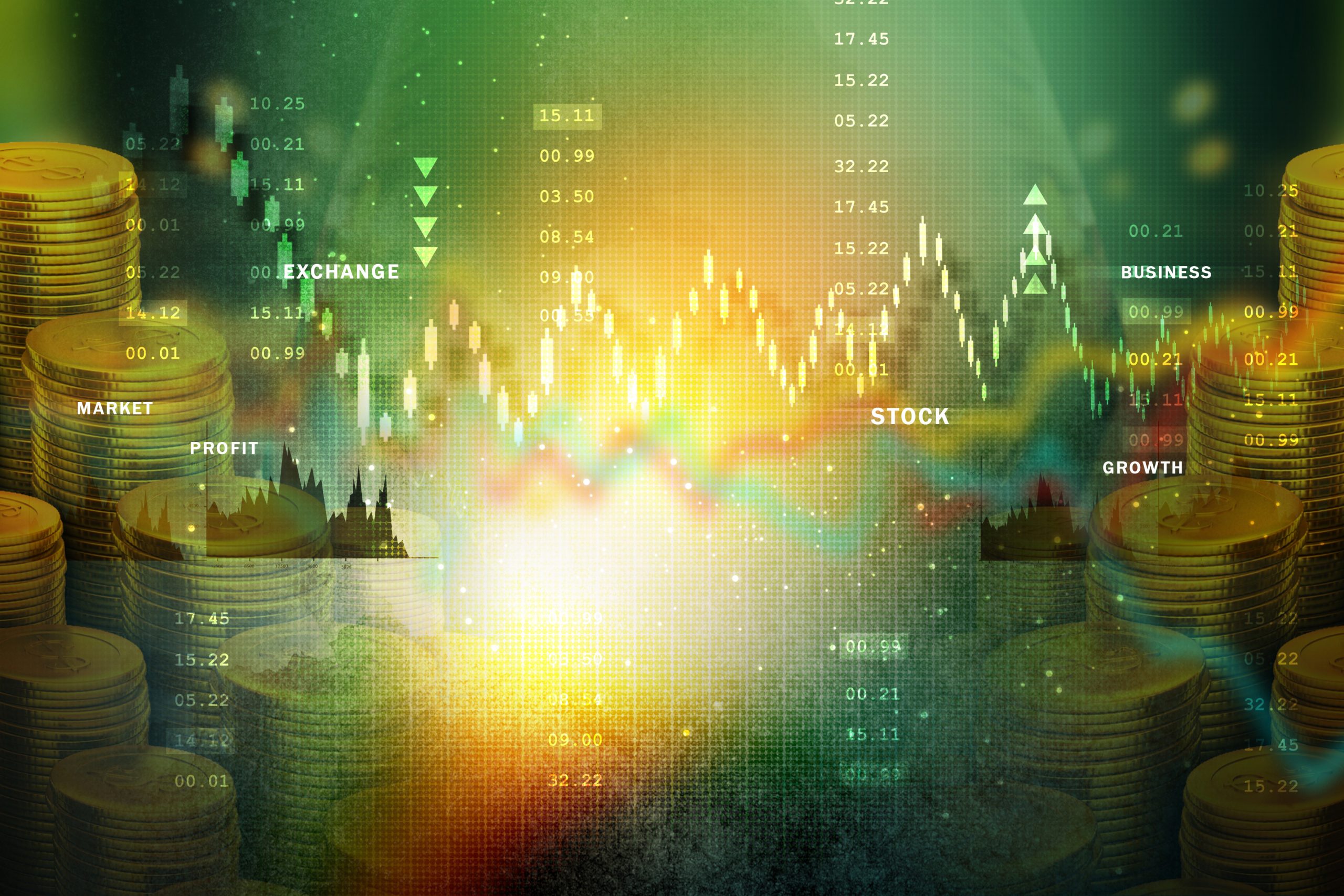 The performance of physical gold and silver has been muted for many months now. Year to date, gold is down roughly 6%, and silver – always the more volatile of the two – has dropped 10%. But secular investors who are aware of both the broad metals uptrend and the acutely favorable gold and silver climate know not to be discouraged by these kinds of pullbacks.

In fact, these pullbacks are identified by one dynamic metals-centric hedge fund as indicative of a pattern suggesting they’re periods of consolidation that tend to take place before higher upward moves are initiated. This is just one of several pieces of data offered by Crescat Capital as evidence that gold – and silver – are about to engage in a serious game of “catch-up” to reach high prices representative of where key indicators such as inflation and central bank assets says they should be.

In my view, the general fundamental case for metals is by itself compelling: Unrestrained deficit spending, ultra-easy monetary policy, inflation and more not only are characteristic of the current economic landscape but are expected to be with us for a long time to come. In my opinion, that scenario is the “immutable truth” of precious metals market investing right now. As long as those conditions persist, I think the environment for precious metals is excellent.

But despite that ideal overarching scenario, investors like to see a real-time reason for optimism when gold and silver don’t appear to be responding as they should against the favorable backdrop. That’s what is helpful about the Crescat report. It serves as a sort of compendium of data reassuring metals investors the broad fundamentals not only look good but that metals are overdue to resume their upward move.

Let’s briefly go over a few of key characteristics that make the current macro climate so ideal for gold and silver.

The fiscal policy case for precious metals is practically self-evident. Following a 2020 that saw the largest budget deficit in history – 3.1 trillion dollars – the 2021 deficit moved into the number two all-time spot at 2.8 trillion dollars. Each of the massive sums is attributable primarily to the nation’s pandemic-fighting effort. But the expansionary outlook for fiscal policy goes well beyond the spending “needs” associated with the pandemic.

Seeking to leave a legacy on par with that of FDR and LBJ, Joe Biden’s original vision of social transformation had a $7 trillion price tag. It remains to be seen what the eventual cost will be. But this we know: Biden and Democrats are highly devoted to spending unprecedented sums in the interest of achieving their progressive-utopian vision for America. Stunning levels of annual deficit spending over the next 10 years are projected, and the national debt could rise nearly 80% over that period.[1]

One of precious metals’ favorite foods – inflation – is back. After 13 years of little-to-no inflation, the year-over-year Consumer Price Index (CPI) came back with a vengeance in April – 4.2%. It hasn’t let up. Since May, the CPI has been 5% or above, and it reached 5.4% in September. Many economists flatly say robust inflation levels will be a regular feature of the economic landscape and global market going forward. “We are transitioning to a higher period of inflation than we’ve had over the last 20 years,” says Joel Naroff, chief economist at Naroff Economics LLC.[2] So there’s that. Then there’s this…

Wildly accommodative monetary policy has been a key driver of metals prices over the last several years. From 2008 to 2017, the Fed Funds rate stayed below 1%. Attempts to raise interest rates in 2018 and 2019 failed as the economy proved unable to withstand even the most incremental hikes, and the Fed Funds rate went back below 1% in early 2020 where it’s remained ever since.

The difficulties associated with moving interest rates up include ever-mounting levels of debt at all levels – government, corporate and household. This debt becomes prohibitively expensive to service as rates climb. The consequences are significant for the economy – and the implications for gold and silver profound.

When interest rates are unable to keep pace with the rate of inflation, the result is negative real rates (nominal rate minus inflation rate). Inflation by itself is welcomed by “real” assets such as metals. But when negative real rates are the standard, metals look even better by comparison to interest-bearing assets that investors understandably find undesirable in negative rate environments. As it stands, broadly accommodative monetary policy and negative real rates will be with us for the foreseeable future – more good news for physical precious metals.

Crescat: Gold and Silver Are Oversold Based on a Variety of Data

But within the broadly favorable climate for metals, there’s the reality that gold does not move upward without pause simply because those general conditions are so favorable. Periods of consolidation – even some backsliding – are particularly common soon after metals hit new highs. There can be a variety of reasons for this unproductive price action. Among them: Achievement of record prices tends to prompt traders to go slowly as they decide if enough of a fundamental base has formed to warrant continuation of the current surge.

Such periods can last for an extended period. And they can be deceiving, suggesting to more casual observers that the metals run has ended. However, if overall conditions remain favorable, a closer look at the more acute dynamics in play during these periods can reveal that gold and/or silver are poised to reengage with the broadly positive trend. The analysis by Crescat Capital suggests that’s what we’re seeing right now in the precious metals market.[3]

Note: The Crescat report is very comprehensive, with a significant number of charts relevant to both physical metals and metals miners. I heartily invite you to review it in full on your own. For this article, I’ve chosen to highlight a few of the charts I think are particularly good at making the case that gold and silver are positioned to resume a profoundly upward direction soon.

In their research report, Crescat emphasizes the struggles the yellow metal can encounter shortly after reaching new highs. The chart below graphically illustrates rather significant price corrections experienced by gold upon hitting new price highs in early 1978 and early 2008. The current all-time price high of gold reached in August 2020 has been followed by another – and ongoing – correction in gold’s price to the tune of around 15%.

Crescat notes the financial media already is “claiming that gold is dead” on the basis of this latest correction, but reminds us the metal tends to resume its upward surge as long as there’s no change in core pro-gold conditions – which there isn’t. 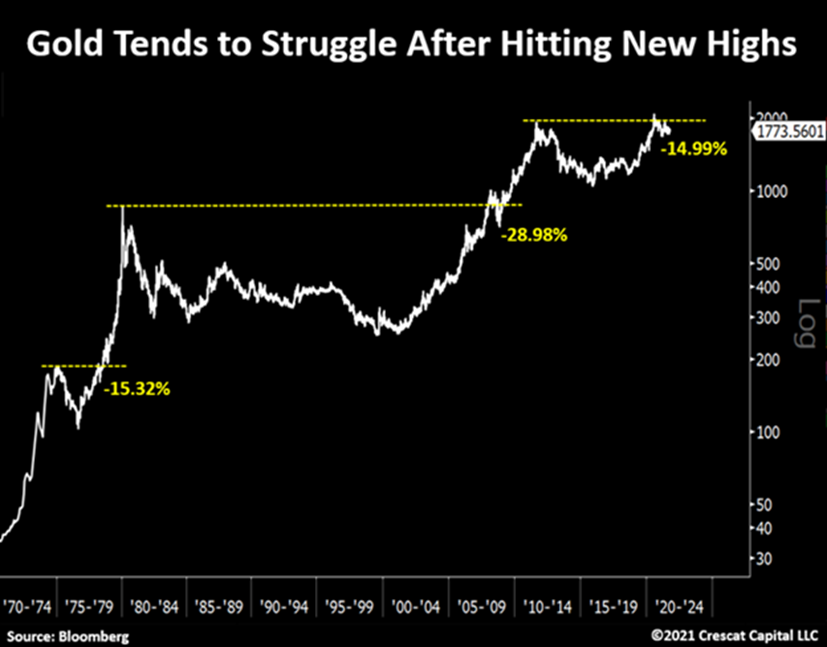 Another Crescat chart I found revealing (below) illustrates the movement in gold’s price vs. inflation expectations going back roughly five years. Notice the sharp divergence between the two at the beginning of 2019, when markets and investors were getting the message the Fed would resume a rate-loosening bias. It is Crescat’s view that investors decided inflation was a foregone conclusion at that point and raced into gold even before definable signs of inflation were evident.

“Extreme sentiment probably explains the reason for its recent weakness after signaling way earlier than any other asset the possibility that an inflationary environment could be ahead of us,” Crescat says. “We are now on the other side of this extreme.” Translation: In the same way gold was ahead of the inflation curve – literally, in this case – it is now decidedly behind that curve and therefore poised to begin making up that ground. This condition could send the price of gold soaring and trigger a new gold rush. 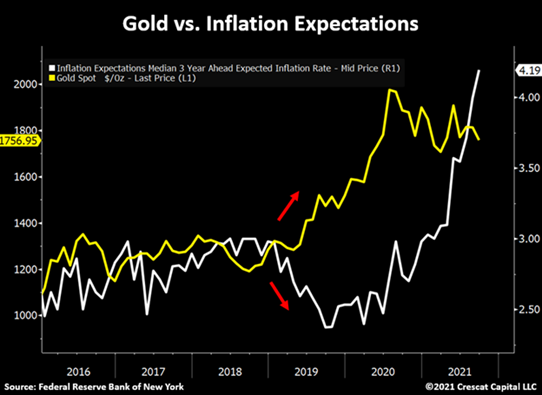 I think the “behind-the-curve” graphics that show gold performance lagging in relation to key data can be useful when trying to evaluate the metal’s near-term prospects.

Another Crescat chart effectively making that general point (below) illustrates gold’s price movement against the quantity of assets owned by the world’s largest central banks.

As you may know, asset purchases by central banks are among the most prominent easy-money tools in use. The fact that gold moves broadly in unison with the increase in those numbers is unsurprising. So it certainly is notable when gold not only lags the growth in central bank assets but there’s substantial divergence between the two as the chart indicates.

It seems illogical that central bank assets would grow as sharply as they have over the last several years (particularly since 2020) and that price of gold would not only not rise with them but even decline for large stretches.

Well, that’s because it is illogical, which further suggests the trend is not sustainable – an assessment shared by Crescat. “For us, it’s a matter of time until gold follows to the upside,” they write. 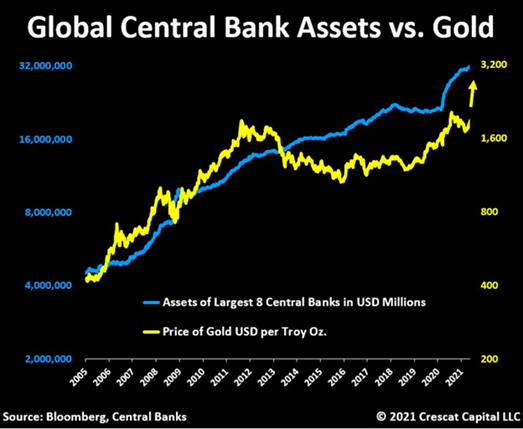 Many U.S. investors have a view of gold as the best precious metal. That said, one Crescat chart I found especially interesting (below) illustrates silver’s apparent underperformance relative to real interest rates. You’ll notice the price of silver and real rates have maintained a close relationship for most of the last decade. However, we see recent and significant divergence in this relationship in the same way we see divergence between gold and other select values.

One implication of the trend lines in this chart is the possibility that silver (a solid precious metal prized for industrial uses and as a portfolio hedge) is significantly undervalued at the moment and therefore poised to surge. “The correlation between inverted real interest rates and precious metals is strong and indicates that the industry is due for a jump,” Crescat says. 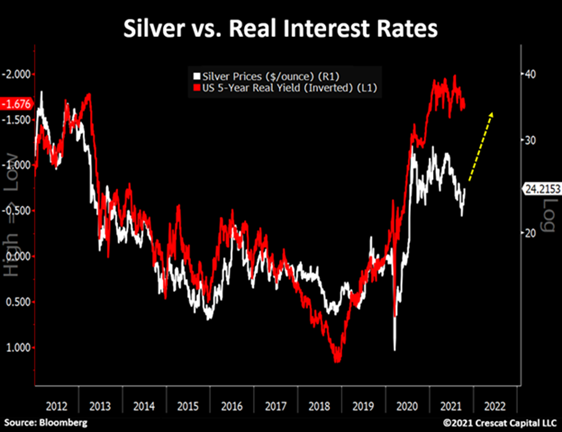 Are Gold and Silver Right for Your Portfolio?

One final note: I believe the writ-large case for metals as good investments remains solid. So while the recent performance of gold and silver may not seem terribly inspiring to some of you, I think it is essential not to lose sight of the forest for the trees right now. Not only are we currently smack-dab in the midst of a solidly pro-metals fiscal and monetary environment, but as data presented by Crescat Capital shows, gold and silver presently look poised to awaken from their most recent period of slumber and resume the upward surge.

I believe astute savers with a retirement fund will recognize the tremendous opportunity that continues to exist in the precious metals market. Are you one of them? If so, the only thing you need to do is determine which is the best precious metal for you. If you’re ready to learn more about how to access precious metals, I invite you to contact Augusta Precious Metals at 800-700-1008.

Everyone who calls Augusta will receive a free guide about investing in physical metal. You also will have the opportunity to learn about our one-on-one web conference. This live presentation – hosted by a member of Augusta’s education department – provides a detailed look at the challenges earnest American retirement savers and other U.S. investors face in trying to grow and save their nest eggs from within the prevailing economic system. Web conference attendees will learn about adding physical gold and silver to their base of assets to help them overcome those challenges and effectively protect their financial futures.

Global economic and political paradigms are changing before our eyes. As they do, so-called alternative assets likely will be relied on more and more by different investors to help protect and even grow retirement savings in the face of a vulnerable U.S. dollar. Let Augusta show you how easy it is to make gold and silver a part of your savings regime – call us today.

Next
Get Your Free
Gold IRA Guide

Hey! I'm Joe Montana
Ready to protect your future? Let's get started!
Are you retired or still working?