The problem is these parties do end – thanks in no small part to the “boom-bust” nature of our cyclical economy. When a bust happens, the effects can be especially painful for retirement savers who built portfolios for growth with nary a thought to protection. Prudent savers who see past the “good times” recognize the value of including assets that can act as a sort of insurance. These are assets that typically strengthen during adverse conditions. Because of this feature, they can minimize or even “cover” losses incurred by risk assets.

One excellent “insurance” asset is gold. Time and again, gold has strengthened when both economic and noneconomic turmoil has caused problems for mainstream financial markets. We’ve seen gold’s tendency to rise during shorter periods of volatility. History also shows gold has done well as during expanded stretches of economic uncertainty. One of the best examples of gold’s capacity to defend portfolios during frightening economic turmoil was during the 2008 global financial crisis.

Gold’s Performance During the Great Recession

The 2008 financial crisis remains the most relevant and compelling economic downturn in the lives of retirement savers today.

As the crisis unfolded, major domestic market indexes plummeted more than 50%. The effect of that on savers who were largely – or even fully – committed to risk assets was profound. Some individuals are still trying to work their way back, even despite the robust Fed-fueled market performances of the last 10 years. Such is the legacy of damage financial setbacks of that magnitude can cause.

So, what could retirement savers have done besides watch their portfolios lose close to 60% of their value in a span of roughly 1.5 years? One option would have been to include a proven safe-haven asset such as physical gold among their holdings.

The U.S. bear market associated with the 2008 crisis “officially” occurred from October 9, 2007, to March 9, 2009. During this time, as domestic financial markets declined more than 50%, gold’s value increased by nearly 30%.

For those who owned gold at this time, the news got even better as the crisis persisted. If you remember, the direct effects of what came to be known as the Great Recession lasted for years throughout the world. Long after the official crisis, in November 2010, Ireland was bailed out by a joint effort of the European Central Bank and the International Monetary Fund. Both Portugal and Greece received bailout funds into 2011. Also in 2011, Standard & Poor’s downgraded U.S. sovereign debt for the first time in history.

What do we see if we extend the view of gold’s performance from October 2007 to October 2011, a four-year period during which the world still was very much mired in the fallout from the crisis?

The S&P 500 had recovered from the near-60% drop it suffered during the bear market, but the index still was down 16% in October 2011. Global markets were off roughly 40% from October 2007 to October 2011. Gold painted a far better picture, however, climbing roughly 127% over this four-year interval. 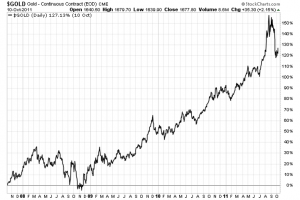 Depending on the size of the gold allocation, the metal’s “insurance” aspect could have greatly limited  a loss due to the financial crisis. Or completely offset it.

Expert: “Extraordinary Circumstances” Driving Some to Overweight in Gold Now

Gold obviously doesn’t provide insurance protection the way insurance companies provide it if your car or home is damaged. Gold is not guaranteed to go up in a crisis or any time. As a genuine safe-haven asset, however, it can help stabilize portfolios during periods of economic uncertainty and volatility.

How much gold should one retain in a portfolio as “insurance”? That’s a question retirement savers must answer for themselves. A higher allocation to gold from October 2007 to October 2011 could have been particularly beneficial. Other periods will show different results.

George Milling-Stanley, the chief gold strategist at State Street Global Advisors, indicated some institutions are overweighting in gold. He said they are doing this at this time based on the belief that “we are in extraordinary circumstances.” Some observers surely would suggest the present circumstances are every bit as extraordinary as circumstances before the 2008 financial crisis.

Where do you go to learn more about gold as portfolio “insurance”? A good place to start would be at a bona fide industry leader in physical gold and silver: award-winning Augusta Precious Metals.

When you call Augusta at 800-700-1008, you’ll speak to a customer success agent. This person will patiently answer all your questions about buying and owning gold and silver. You’ll learn about the wide array of risks to retirement savings that gold is known to protect against. You also will have the opportunity to find out if you’re eligible to participate in the live Augusta Profit & Protect Web Conference.

This multimedia presentation is hosted by Devlyn Steele, Augusta’s lead economic analyst and a member of the Harvard Business School. Mr. Steele reveals the real reasons a secure retirement eludes so many Americans, despite their best efforts. He also will demonstrate how owning portfolio protection assets such as gold and silver can keep you on the path to a successful retirement.

There is no shortage of threats to the stability of retirement portfolios today. The fragility of the global economy is well-documented. Overvalued markets are particularly vulnerable to cracks in the worldwide financial system. If you don’t yet own any portfolio “insurance” in the form of physical precious metals, contact Augusta today. Learn more about gold’s performance and the protective power of both gold and silver.