History shows gold has reliable safe-haven capacity. However, gold’s performance has been caught up in the same coronavirus-fueled volatility that has plagued risk assets. At the outset of the latest market-rocking financial panic, precious metals were sacrificed to some extent to cover margin calls and neutralize portfolio losses. Savers have resisted liquidating their beaten-down equity positions. Still, even with that frantic selling, gold remained resilient, even if not following its usual trajectory upward during crises.

If history repeats itself, gold’s near-term performance is about to improve dramatically. The Federal Reserve committed to doing whatever it takes to support capital markets during this crisis. Observers and experts expect the world is about to be bathed in cash from the most substantial round of quantitative easing (QE) in history.

The Federal Reserve first introduced the world to quantitative easing in November 2008, as that global financial crisis was evolving. From the beginning of the crisis in October 2007, gold behaved similarly to the way it’s been moving recently. It demonstrated a measure of safe-haven potential but its price movement revealed it wasn’t immune to the “sell everything” mentality of a financial panic.

The announcement of QE was a turning point for gold performance during the 2008 crisis. The formal commitment to ultra-loose monetary policy sparked a bullish run in the metal that would last for years.

And now investment banking giant Goldman Sachs says gold looks as though it’s going to repeat the same pattern in 2020.

The Federal Reserve is “all in” on supporting capital markets at a level never before seen. On Monday, March 23, the Fed announced it will buy as much government-backed debt as necessary to keep the markets for housing and Treasury bonds stable. In the same announcement, the Fed also said it will buy corporate bonds for the first time in its history. Some believe the Federal Reserve’s coronavirus-related efforts could total $4.5 trillion, which would double the Fed’s total balance sheet.

Crisis-cued quantitative easing can impact gold beneficially in a couple of ways. Massive injections of liquidity into the financial system can stem panic-selling of all assets to cash. When that happens, clearer-thinking savers recognize and appreciate gold’s safe-haven potential. According to Markets Insider, Goldman anticipates seeing that play out now as it did in 2008 in light of the Fed’s public commitment to unlimited QE. “We are likely at an inflection point where ‘fear’-driven purchases will begin to dominate liquidity-driven selling pressure as it did in November 2008,” writes Goldman’s Global Head of Commodities Jeffrey Currie.

The bigger potential payoff for gold buyers from quantitative easing is the possibility of a greatly weakened dollar. When the money supply increases massively, gold becomes very attractive to savers as a hedge against dollar-weakening effects of such an increase. Savers also find non-yielding gold more appealing during periods when drastic monetary policy reduces interest rates to or near zero. Interest-bearing assets obviously have less to offer in a zero-rate climate compared to a genuine safe-haven asset such as gold.

In Currie’s research note from last Monday, he suggests gold performance during the current crisis may prove to be similar to the move it made in 2008. Writing about gold’s prospects today in the context of 2008, Currie says, “We are beginning to see a similar pattern emerge as gold prices stabilized over the past week and rallied today as the Fed introduced new liquidity injection facilities with this morning’s announcement.” Currie adds that “both the near-term and long-term gold outlook are looking far more constructive, and we are increasingly confident in our 12-month target of $1800/oz.”

The chart below shows gold performance from October 2007 through April 2011. October 2007 marked the beginning of the bear market component of the 2008 financial crisis. The Fed announced its first round of QE in November 2008. Gold demonstrated some impressive resiliency from October 2007 to November 2008 while panic selling was overtaking the markets (which were down roughly 40% during this period). Nevertheless, it did not entirely escape the effects of the boundless volatility. Then, as now, savers turned to gold to provide the needed liquidity in their accounts. However, in the chart below, look how gold performed from November 2008 – when QE1 began – through the subsequent 2 ½ years. The metal’s price appreciated more than 100% during that period.

Performance of Gold from October 2007 through April 2011
(Chart Courtesy of StockCharts.com) 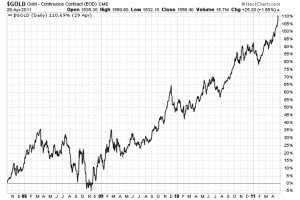 Gold performance improved substantially after the government printed and added dollars to the economy in November 2008.

Goldman Sachs’ 12-month price target is 1,800 dollars per ounce. Other experts see gold reaching 2,000 dollars per ounce by the end of 2020. Greg Jensen is the chief investment officer of the world’s largest hedge fund, Bridgewater Associates. Jensen says a wealth of global tensions could push gold to 2,000 dollars per ounce this year. Clark Fenton of RWC Partners sees 2,000-dollar gold this year based on the Fed’s expected response to the coronavirus pandemic.

If you are ready to have a discussion about adding physical gold to your portfolio, call Augusta Precious Metals at 800-700-1008. You’ll enjoy a friendly, informative and no-pressure conversation about physical precious metals. Our customer success agents are highly knowledgeable about the ways the current pandemic could continue to negatively impact retirement savings. They are also well-versed in how economic events stemming from the crisis could positively impact gold performance.

Eligible callers will receive our free guide on retirement protection. We’ll also give you information about our free, exclusive Profit & Protect Web Conference. This live presentation is hosted by Devlyn Steele, Augusta’s senior economic analyst and Harvard Business School member. It’s worth noting that Mr. Steele predicted the 2008–2011 bull run in gold – and silver. And, like Goldman Sachs, he sees the pieces falling into place for gold performance to echo that move now.

There’s no way to know just how bad economic and market conditions might become as the financial aspects of the coronavirus crisis continue to unfold. However, a growing number of experts project a robust future for gold as the Fed moves to “QE infinity.” Learn how easy it is to position your portfolio to capitalize on a potential surge in gold performance – contact Augusta Precious Metals today.

Let Augusta Help You Protect
Your Future and Your Legacy!

Speak to an Augusta gold and silver specialist today.

Or fill out the contact form here, and a member of our team will be in touch with you shortly!