Gold and Silver Stand Out as Inflation Ruins the Economic Picture 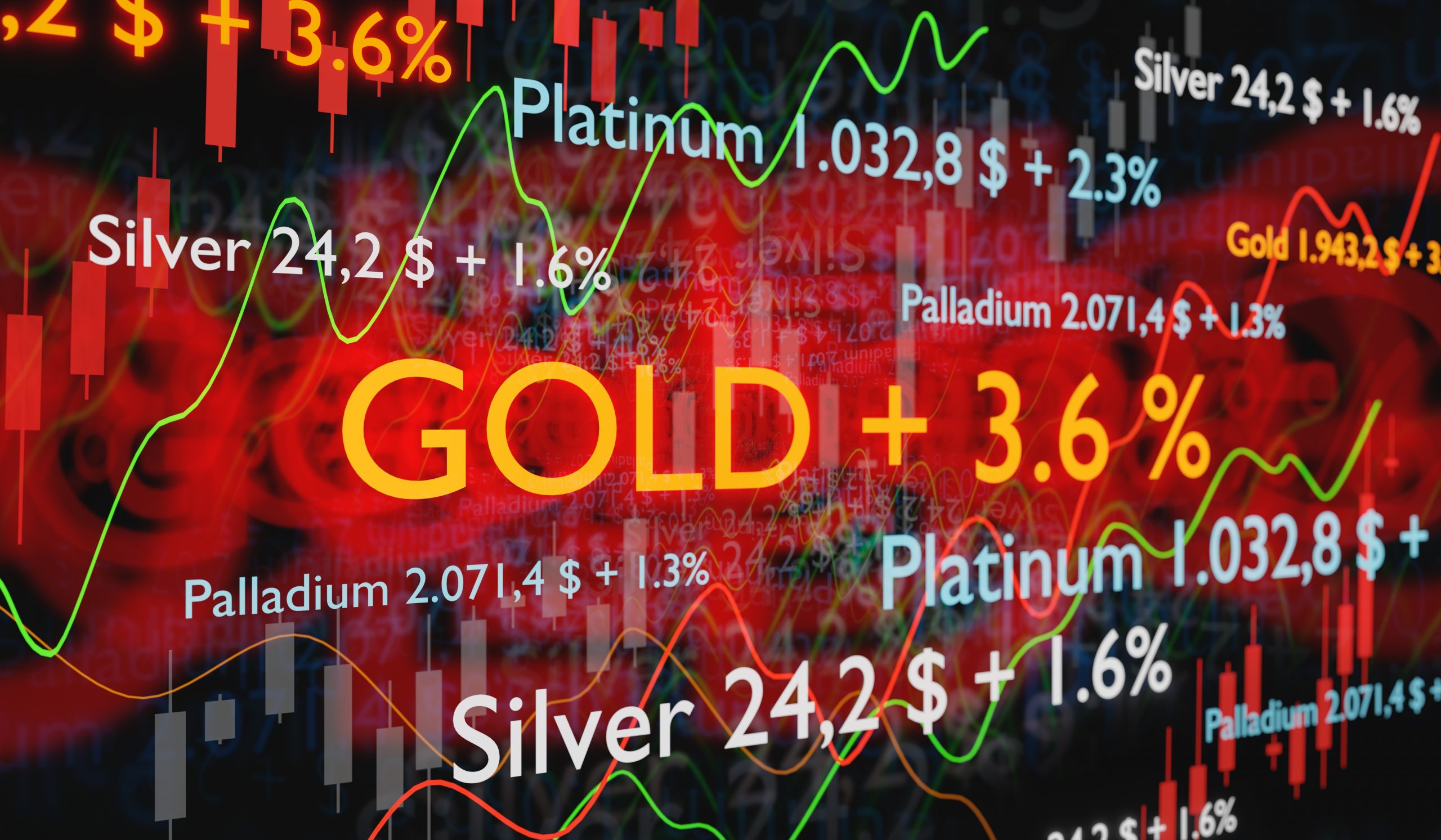 This news is a big deal for a few reasons. Perhaps the biggest of all: It highlights the degree of uncertainty that Wall Street’s savviest professionals believe will characterize the years to come.

The truth is that the United States’ economic picture is not good right now. I normally will begin or end such a statement with “in my opinion” or words to that effect. But the supporting evidence is so profound that there’s no reason to make such a qualification.

On that note, economist Daniel Lacalle recently penned a piece in which he effectively took a snapshot of the economic landscape right now – and the visual leaves much to be desired. As he details, consumer sentiment is in a bad way. As for the Misery Index, it suggests things are, well, miserable. And underpinning each of these lousy metrics is – surprise, surprise – a particularly lousy inflation number now at its highest rate since 1982 and poised to get worse.[2]

Many of Wall Street’s biggest institutional asset managers are preparing for what they see as an uncertain path forward in their effort to grow the retirement savings of private workers, public employees, pensioners and other retirees. They are preparing for this uncertainty in large part by planning a big move to gold in the years to come. Given the highly dubious outlook for the nation’s economy Daniel Lacalle describes, if you are a person who is saving for retirement, it might not be a bad idea to ask yourself whether you should be doing the same.

Lacalle leads his piece with a reference to the University of Michigan’s consumer sentiment index, which at 70.4 for December continues to reflect significant pessimism about the economy among U.S. citizens. Although modestly higher than November’s 67.4 (which was a 10-year low), the December figure is “still nearly identical to the average reading in the prior four months (70.6)” as survey director Richard Curtin noted.[3]

Does this seem as though consumers share President Biden’s view that the economy is “in strong shape,” as he said just a handful of days ago?[4] Hardly. And their biggest worry? You guessed it – inflation, as Curtin made clear in his assessment of the results:

Curtin also said this about the pervasiveness about the inflation effect and its effect on consumer outlook:

The inflationary erosion of living standards [is] currently reported by one-in-four households, and those inflationary driven cutbacks have continued to spread to middle age, middle income, and middle educational groups.[6]

With financial worries continuing to grow as consumer prices continue to surge, it seems as though Americans’ enthusiasm about their own near-term economic prospects will remain very muted.

Misery Index: Another Metric Moving in the Wrong Direction

Lacalle’s downbeat view of the economy is predicated on more than UMichigan’s tanking consumer sentiment index, however. He also points to the rising value of the famous – or infamous – “Misery Index” as support for his contention that things are not going so well in the U.S. economy.

Do you remember the “Misery Index”? It’s been a long time since we’ve heard about it. The Misery Index is a relic of the 1970s, which was a time viewed by some experts as the worst economic decade in U.S. history since the Great Depression.

The Misery Index is a creation of the late economist Arthur Okun, a former chairman of the Council of Economic Advisers, who thought one of the most revealing measures of the nation’s economic health would be the sum of the unemployment and inflation rates. And so the Misery Index was born.

In his piece, Lacalle cites the Misery Index at 10.82 (4.6% unemployment plus 6.22% inflation rate). But since his article was published, the Misery Index has since moved up to 11%. November unemployment did drop to 4.2%, but November’s year-over-year inflation figure jumped to a whopping 6.8%. The Misery Index now is at its highest level in a decade – not including April 2020 through July 2020, a period generally seen as the peak of the COVID lockdowns.[7]

Inflation, then, is the primary culprit of both plummeting consumer sentiment and rising citizen misery. But some observers see inflation as less consequential at this time than it has been before because the economy supposedly is humming along right now and people are earning more.

Lacalle says those shrugging off rising prices believe inflation “is not a problem because it is a function of high growth and [they point] to higher wages as a mitigating factor. To them, people are seeing wage increases, so they can afford the same and continue to consume.”

And you might recall MSNBC host Stephanie Ruhle’s recent comment that “the dirty little secret here” about inflation is that “while nobody likes to pay more, on average, we have the money to do so.”[9]

But IS there something to the contentions of folks like Weller and Ruhle that inflation really isn’t a problem because people are awash in money right now? In a word, no.

Unfortunately, the “strong wage gains” cited by Weller and others are a myth, as Lacalle points out. Real median weekly wages – which are weekly wages that take inflation into account – are dropping.

Year-over-year average hourly earnings, indeed, are up – 4.9% through October. However, thanks to big jumps in food prices (food inflation is up 10.5% cite) as well as the higher cost of energy (gas up more than 42%), year-over-year overall inflation through November is at 6.8%, as I noted earlier.[10]

“For now, inflation is going to continue to run above very solid wage growth,” economist Joseph LaVorgna declared recently. “This is why when you look at consumer confidence, it’s really taking a beating. Households do not like the inflation story, and rightly so.”[11]

Lacalle contends that the inability of wages to keep pace with inflation is a big reason why the labor force participation rate (LFPR) remains so low (61.8%) in the midst of a supposed recovery. The LFPR – calculated by the U.S. Labor Department’s Bureau of Labor Statistics – is the percentage of working-age Americans who are working or are actively seeking work. And according to the economist, improvement in the rate is just not possible due to the numerous constraining effects of soaring prices.

“This is a recovery where citizens cannot take a job because they cannot afford the costs [of such things as day care and transportation],” Lacalle writes, “and where businesses are struggling to get workers but cannot raise wages because margins are weakening due to rising input prices.”

In fact, if you look at the LFPR over the past 50 years, you’ll find that except for the height of the COVID lockdowns last year, the LFPR hasn’t been this persistently low since the 1970s. 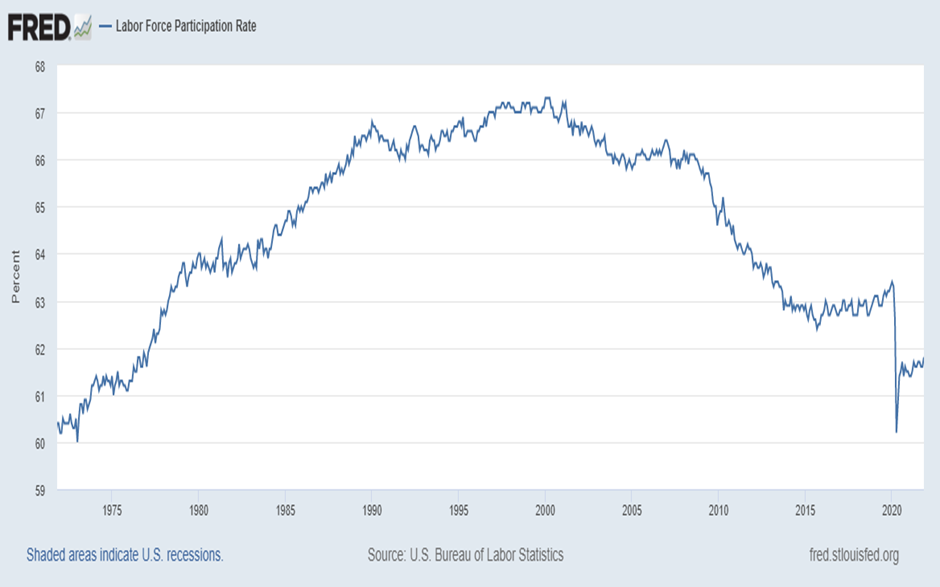 Gold and Silver: The Cure for Debilitating Inflation

For an American economy supposedly in “strong shape,” the current snapshot of the nation’s economic landscape is a little grim-looking – wouldn’t you say?

And there’s no understating inflation’s role in darkening the picture. Soaring consumer prices are the overriding influence in unfortunate sentiment and Misery Index metrics, due in no small way to their negative impact on real wages. And economist Daniel Lacalle makes a credible case for inflation’s role in keeping a giant swath of America’s working-age adults at home.

It seems, then, that inflation is the biggest single menace overall to Americans’ personal financial health. Given this, what’s the best medicine?

I would prescribe a precious metals “cocktail” made of physical gold and silver. It’s hardly a secret that metals are revered by some of the world’s wealthiest for their capacity to effectively hedge against inflation.[12] But what I find particularly appealing about a precious metals inflation solution right now is the likelihood that the Federal Reserve will be greatly limited to the extent to which it can raise interest rates in any effort to chase down soaring prices.

I expect the Fed to assume a more hawkish public stance on rates as the Consumer Price Index (CPI-U) (inflation) proves increasingly troublesome. However, I believe the massive levels of accumulated debt at all principal levels – government, corporate and household – make it effectively impossible for America’s central bank to raise rates.

I also think the Fed does not want to be responsible for bursting the enormous asset bubbles looming overhead. In my view, we may see rates go up, but I don’t see them matching inflation. Upshot: Negative rates, which are good for metals, will prevail for the foreseeable future.

If that thinking makes sense to you, you might be interested in adding physical precious metals to your asset inventory. And if you are, a great place to go for your gold and silver needs is Augusta Precious Metals.

Augusta has the perfect type of knowledgeable, friendly customer success agents you want to speak with about investable gold and silver. When you call Augusta at 800-700-1008, you’ll receive a free guide. You also will learn about Augusta’s live one-on-one web conference. Designed by Mr. Devlyn Steele, Augusta’s full-time Harvard-trained economist, this presentation blows the lid off a United States financial system that has come to favor elites at the expense of everyday Americans. But that’s not all. In the web conference, you also learn how adding gold and silver to your portfolio could help you wrest control of your financial well-being away from the elites and keep it firmly in your own hands.

Consumer sentiment is declining. Misery is rising. It clearly is a difficult time in the land of opportunity. If you agree that precious metals is at least part of the cure, I wouldn’t waste any time moving to protect your hard-earned savings with physical gold and silver. Call Augusta today.