Gold, Silver, or Both? THAT Is the Question

You’ve been thinking seriously about buying precious metals. You’ve done your due diligence. You’ve spoken to your financial advisor. You believe your savings potentially could benefit from the diversifying presence of physical gold and/or silver. And now you’re ready to purchase.

It’s not unusual for those who think in general terms about buying precious metals to give little consideration at the outset to just which of the metals they’ll purchase. In their defense, public discussions about buying gold and silver often lump the two together under the heading of “precious metals.” The suggestion is that there’s little or even nothing that distinguishes one metal from the other.

But is that really true? Are gold and silver so similar that any contrasts between the two represent the proverbial “distinction without a difference”?

No. All precious metals are not the same. Gold and silver aren’t even related, despite the fact that they’re mentioned in the same breath so frequently. One does not exist in terms of – or as a function of – the other. They do, of course, share the same broad characteristics that define precious metals. As a result, gold and silver often have moved in the same direction at the same time in concert with relevant economic and geopolitical influences. But “often” doesn’t mean “always.” Moreover, even when gold and silver do exhibit the same general longer-term trends, there can be great differences in shorter-term price action between the two.

As you prepare to embark on your own precious metals journey, you’ll have to decide if you’re going to purchase gold and silver or gold or silver. Having a better understanding of what distinguishes one metal from the other as a portfolio asset can play a crucial role in ensuring retirement savers make the right choice on behalf of their own objectives.

Gold and Silver Both Hard Money, but You Can’t Deny The Differences

The most prominent distinguishing characteristics of precious metals are considered to be those which define their suitability as hard money: scarcity, solidity, nontoxicity and durability. By these standards, gold, silver, platinum and palladium make the cut. Copper, for example, does not, in part because it doesn’t meet the scarcity test. According to the U.S. Geological Survey, the total amount of copper discovered to date is roughly 2.8 billion metric tons.[1] By comparison, only 1.74 million metric tons of silver has been discovered, while an even paltrier 244,000 metric tons of gold has ever been found.

But even though platinum and palladium are precious metals, are they rarely mentioned in the same breath as gold and silver. The reason, as I see it, is because neither platinum nor palladium have a meaningful history as a medium of exchange and perceived store of value. As for gold and silver, they’ve been around as monetary metals and perceived stores of value for millennia.

For some perspective, note that gold coins were first struck around 550 BC.[2] The use of silver as currency began around 700 BC.[3] However, platinum and palladium weren’t even discovered until the years 1735 and 1802, respectively, and government-issued palladium coins didn’t exist until Sierra Leone began issuing them in 1966.[4]

So gold and silver may look as though they’re joined at the hip as physical assets. However, they can behave very differently as savings assets. And understanding those differences is important to make an informed decision about which to buy – or, for that matter, whether you should own both.

A notable difference between silver and gold is that the silver market is much smaller than the gold market. Yes, the supply of silver is much larger than the supply of gold. But because the price of silver is just a tiny fraction of gold’s price, the total market capitalization of gold is roughly 10 times that of silver. Silver’s much-smaller market means the metal can be prone at times to considerably greater volatility than that which characterizes gold. There’s no shortage of evidence to this effect – including plenty from 2020.

As the COVID-19 outbreak was morphing into a full-blown pandemic during last February and March, a wave of panic-induced selling swept across practically all assets. In the span of those two months, while gold managed to keep its head above water and “appreciate” a measly .55%, silver tumbled roughly 20%. In the subsequent months, a measure of calm returned to markets as the Federal Reserve announced a plan of unlimited metals-friendly quantitative easing (QE). Silver’s response was to exhibit additional volatility, only in a sharp upside move this time: From April to August, while gold grew about 27%, silver went on an epic run, surging roughly 100% over the same period.

Overall, from February to August 2020, gold grew by about 28% as silver climbed 53%. But within that period lasting just over six months, gold’s movement was considerably less frenetic than silver’s, even as the white metal posted the better overall number. The sometimes-significant volatility of silver is something prospective metals buyers should consider as they determine in what manner to add precious metals to their savings mix.

More-volatile silver took the bigger beating during the panic-driven selloff of nearly all assets at the outset of the pandemic. But that same volatility – to the upside – later helped drive silver well past gold in subsequent months during the great precious metals surge of 2020. 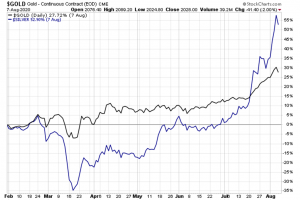 Another difference between the metals is silver’s potential to respond even better than gold in the face of QE. As precious metals that are viewed broadly as hedges against potentially inflationary monetary policy, both gold and silver have the capacity to thrive when such moves are made. But silver is also a raw material indispensable to the manufacture of a variety of products. Demand for the metal can increase significantly on this basis, as well, particularly when companies are confident QE will help accelerate economic recovery. Indeed, it’s reasonable to believe part of silver’s sharp rise from April to August – nearly four times that of gold’s increase – is attributable to this “dual” effect.

Is One Metal “Better” Than Another?

If we look at the performance of gold and silver over the last 20 years, we find gold has appreciated roughly 570% while silver has appreciated about 480%. Given these numbers, it’s not unreasonable to conclude both metals have been solid performers since the beginning of the new millennium (although there is no way of knowing if these results will in any way continue). Some might further conclude that gold is “better” than silver as a metals asset.

Hold that thought. Now let’s look at the performance of gold and silver during the principal years of the 2008 financial crisis. From 2008 to 2011, gold appreciated roughly 160% while silver climbed about 400%. Both impressive runs, to be sure. But there’s no denying silver’s record of appreciation – perhaps helped along by massive doses of QE during that time – was considerably greater than gold’s. Does this suggest silver is “better” than gold, at least in the context of a financial crisis that cues the application of drastic monetary policy?

A simplistic reading of these performance numbers might prompt some to conclude that one metal is “better” than the other as a precious metals asset. But that assessment would require making assumptions about future performance and future economic influences that may not be accurate.

This is why it’s best not to bother straining to decide if one metal is a better overall savings asset than another. Instead, consider the idea that gold and silver each offer potential value in its own way. Gold’s much-larger market and greater worldwide cachet suggests the possibility it could be a steadier long-term asset, depending on what happens in the market going forward. Silver’s smaller market and demonstrated particular sensitivity to QE suggests it has the potential to be a sudden and strong performer to the upside in the same way it can sometimes exhibit significant volatility to the downside. Ultimately, retirement savers who’ve decided to buy metals must defer to their own personal objectives and savings strategy to determine if, for them, it makes sense to own gold and silver…or gold or silver.

[3] The Silver Institute, silverinstitute.org, “Silver as a Precious Metal” (accessed 2/4/21).