That sentiment is how policymakers in Washington, D.C., often respond these days when challenged on the potential consequences of measures being taken to combat the pandemic’s economic fallout.

One of many cases in point occurred when Janet Yellen appeared before the Senate Finance Committee in January for her confirmation hearing as treasury secretary. During that appearance, she addressed concerns about the effect then-President-elect Biden’s proposed $2 trillion pandemic stimulus package could have on the national debt:

Neither the president-elect, nor I, propose this relief package without an appreciation for the country’s debt burden. But right now, with interest rates at historic lows, the smartest thing we can do is act big. In the long run I think the benefits will far outweigh the costs.1

Whether the benefits will, in fact, outweigh the costs remains to be seen. What we don’t have to wait to learn are the two most profound consequences of “anything goes” accommodative monetary policy and free-spending fiscal policy in their roles throughout modern economic history: record growth in the money supply and continued increases in the size of the federal debt.

Frank Holmes, in his capacity as chief executive of U.S. Global Investors, a gold-centric asset management firm currently steering $3.5 billion in assets, is well aware of these consequences. And in two recent articles for Forbes, Holmes pointed directly to gold as one way savers could help mitigate their effects going forward. In my opinion, it’s worth noting his belief that gold purchases can help insulate financial resources from the potential ramifications of a massively enlarged money supply and skyrocketing federal debt.

Money Supply Up Nearly 400% in the Past Year

It likely won’t come as a surprise to you that the money supply in the U.S. has surged since the Federal Reserve said it would do whatever it takes to combat economic fallout from the pandemic. What might surprise you is just how much it has surged.

The measurement of “M1 money” is the most-often-cited metric of money supply. M1 refers to all of the cash and coins in circulation outside of the Federal Reserve and bank vaults. M1 also is made up of demand deposits, other checkable deposits and traveler’s checks. Because it is meant to be the most accurate measurement of readily circulating money in the system, it does not include even so-called “near money” accounts and instruments such as savings accounts and money markets.

The increase in the M1 money supply in the past year has been nothing short of astonishing. In his Forbes article on the subject of the M1 increase and gold, Frank Holmes notes the amount of cash circulating throughout our financial system is up nearly 360% from a year ago.2 Holmes suggests the possibility that a cash infusion on this scale could result in dollar debasement and, eventually, inflation. 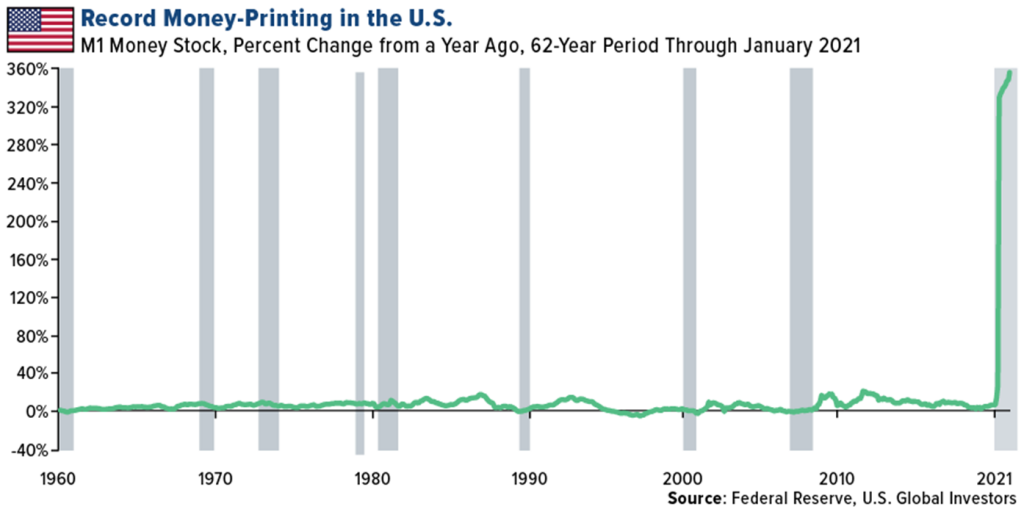 In Holmes’ view, gold purchases are one way to combat the potential ill-effects of this kind of rapid and seemingly unbridled expansion of the money supply. Should dollar debasement and its potentially negative effects come to pass, Holmes says that savers “with exposure to gold…would be in a much better position than those without.”

In a separate piece for Forbes, Frank Holmes also weighs in on another consequence of America’s pedal-to-the-metal application of the fiat money system – the nation’s ever-growing record federal debt.3

Holmes notes it’s been 50 years since America fully came off the gold standard. Since that time, he points out, “there’s been a significant and growing lack of discipline when it comes to government spending.” Some might call that a classic example of understatement. The federal debt now is over $28 trillion and represents more than 130% of the U.S. economy’s size, according to Holmes.

And the long-term outlook for the federal debt is even more ominous according to the Congressional Budget Office (CBO). In a projection detailed by Fox Business, the CBO says the federal debt is poised to double over the next 30 years to a level that would make it a mind-blowing 202% of gross domestic product (GDP).4 Fox Business says the CBO’s forecast does not account for any additional spending we might see from Congress this year. The forecast does not include the $1.9 trillion pandemic-based stimulus package that will soon be law and immediately launch the debt even higher.

What could such an unrestrained federal debt mean to the nation? The nonpartisan Committee for a Responsible Federal Budget struck a tone of great urgency in its assessment of this in a recent statement:

High debt levels will slow income and wage growth, increase interest payments, place upward pressure on interest rates, reduce the fiscal space available to respond to a recession or other emergency, place an undue burden on future generations, and heighten the risk of a fiscal crisis.

For Frank Holmes, there’s one answer to this perceived financial recklessness for savers when it comes to avoiding potential losses: purchase gold. Holmes notes that while “the current monetary system of unlimited money-printing…makes each U.S. dollar less valuable,” it also serves to make “each ounce of gold more valuable.”

Apply Your Own Personal Gold Standard to Help Secure Your Savings

Since 1971, when President Nixon completely removed the U.S. from the gold standard, our currency has had as its anchor what’s called the “full faith and credit” of the U.S. government. “Full faith and credit” essentially refers to national political and economic stability, taxing authority, and the capacity to print even more dollars. As you can see, this is nothing like gold (the previous anchor of our currency). Gold is a hard asset, valued the world over and prized for thousands of years as both a store of wealth and medium of exchange.

There’s little you can do individually to change the American monetary system or the way it’s applied by the Federal Reserve and our representatives in Washington, D.C. You could, I suppose, support candidates who place a premium on fiscal responsibility – if there were any.

However, neither of the major U.S. political parties has shown any real interest in balancing the budget for many years. Rep. Mark Green (R-Tenn.) did recently re-introduce a constitutional amendment that would require Congress to balance the federal budget. But as The Hill noted, the effort is already “dead on arrival” in Congress despite Green’s declaration that the national debt represents “a crippling burden that our children and grandchildren will shoulder.”5

Retirement savers may not be able to change policy in the nations’ corridors of power. But that doesn’t mean they’re powerless to manage their own savings. Americans have the ability to put their own financial resources on the gold standard, in a fashion, with physical gold purchases (and silver) and adding those trusted alternative assets to their savings base.

U.S. Global Investors’ Frank Holmes suggests it could be a savvy move in these drastic times. Whether gold purchases are the right move for you is a question only you can answer. But one thing seems clear: The concerns prompting so many to look favorably at gold right now, such as the rapidly growing money supply and skyrocketing federal debt, appear as though they’ll remain with us for a long time to come.