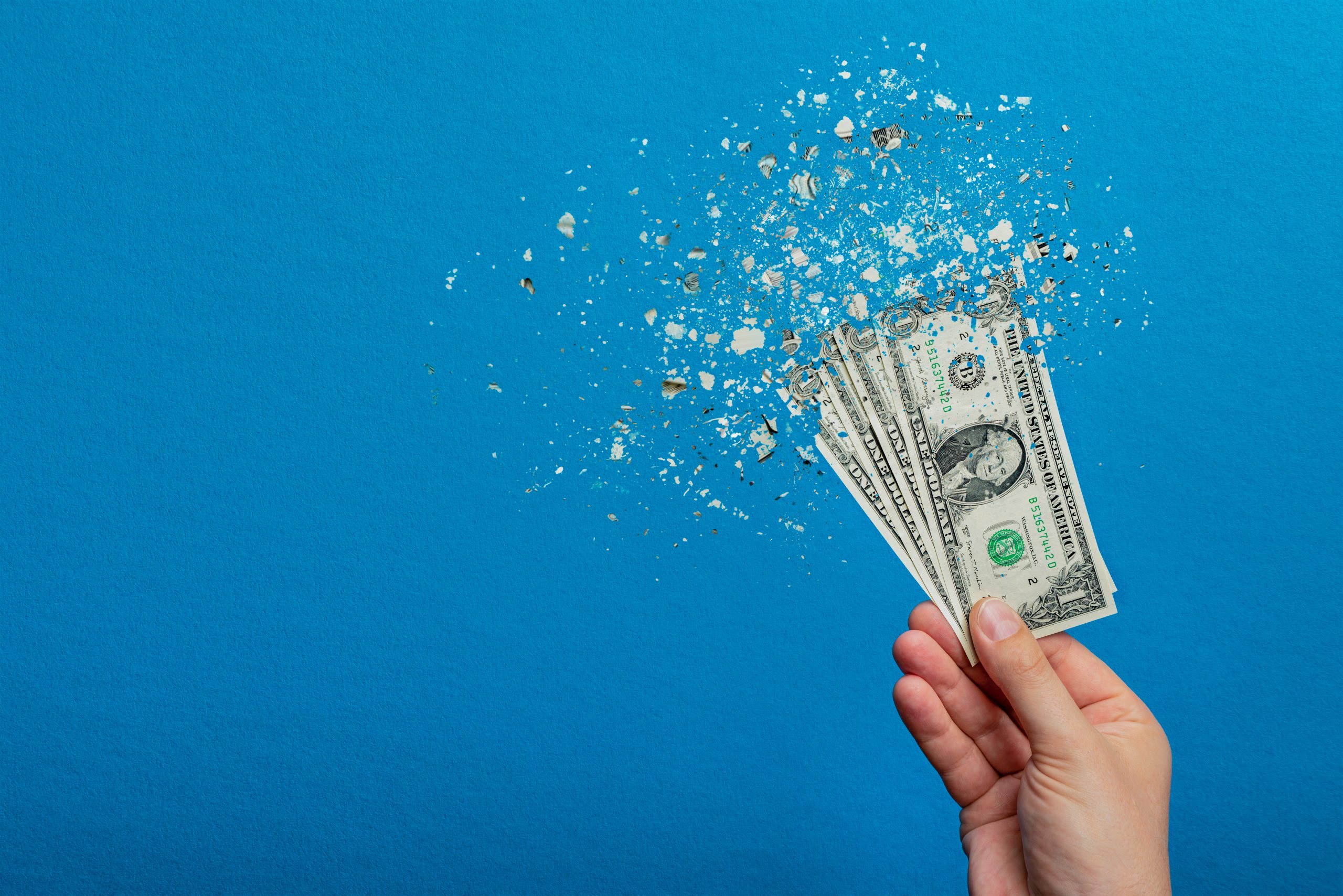 By now you know America has a serious inflation problem. The most recent (October) year-over-year Consumer Price Index (CPI) registered at a whopping 6.2% – and shows no signs of slowing down. An important question for retirement savers – for all Americans – is how they will best survive within an environment characterized by high inflation. I am a strong proponent of owning physical precious metals as an antidote to high inflation. But I’m a big believer in metals as inflation-management assets for reasons that go well beyond the fact that I am CEO of an industry-leading precious metals company.

One of those reasons is metals’ demonstrated capacity to soar amid low-rate/high-inflation conditions such as those that characterized much of the 1970s and characterize America today. But another reason is that after all of the years physical precious metals have been a part of the monetary and investment landscape, their intrinsic value provides a level of financial security that remains highly regarded by practically everyone.

Many billionaires love gold during inflationary conditions.[1] So do institutional investors. They are the Wall Street asset mega-managers, responsible for overseeing mutual funds, pension funds and other investment collectives, to which the retirement fortunes of many working Americans are entrusted. In fact, a recent survey revealed that 40% of those institutional fund managers that don’t own gold already expect to add it to their portfolios within the next three years.[2]

These are meaningful validations of precious metals as inflation-fighting assets, in my view. But there’s another sort of validation of precious metals taking place right now, one as profound as it is simple. A growing number of merchants in hyperinflated Venezuela now are accepting gold – physical gold – as payment for goods and services.

The acceptance of gold by these merchants is not officially sanctioned by the state. But these merchants don’t care. Because the inherent soundness of gold grants it legitimacy as a medium of exchange and store of value that no fiat currency – least of all the worthless bolivar – can match.

Another reason Venezuela’s situation is interesting is that the U.S. is continuing in its own upward-moving death spiral toward destructively high inflation. The fact that Venezuelan merchants are taking flakes of gold over actual currency should telegraph to American retirement savers who are desperate to protect their own savings just how important precious metals can be to honestly providing that protection.

Venezuelan Citizen: “You Can Pay for Everything With Gold.”

The official currency of Venezuela is the bolivar. But the preferred medium of exchange of Venezuelan merchants? That’s a different story.

According to a recent Bloomberg article, the bolivar now is so beaten down that desperate Venezuelan business owners are accepting pretty much everything except the bolivar these days.[3] The U.S. dollar has become the preferred medium of exchange in the capital of Caracas. Where Venezuela borders Colombia, it is the Colombian peso that’s most welcome. The same principle is at work at the Venezuela/Brazil border, where Brazil’s real is far more popular with Venezuelan merchants than the bolivar.

But in Venezuela’s rural southeast, not far from the border with Guyana, there’s an altogether different medium of exchange preferred by local merchants amid the nation’s persistent financial crisis: physical gold, which locals are coming by easily thanks to the numerous mines – legal and illegal – in the area. Bloomberg reports that day laborers who work the mines are paid in unrefined nuggets. This has proven to be a win-win for both those workers and the merchants who are grateful to be using currency other than the worthless bolivars. Many see gold as the soundest of money.

A great many stores, restaurants, hotels and other retail establishments in the region now price goods and services in terms of gold. And proprietors are not only accepting gold as payment, they also are paying employees in gold. It makes sense. After all, if stores and other retailers in the area prefer transactions in gold, it naturally follows that employees living in the same area would be paid in gold, too.

Bloomberg points out the use of gold as a form of payment is gaining traction and moving into area cities such as Ciudad Bolivar (“Bolivar City”), the capital of Venezuela’s Bolivar State. Caracas Chronicles notes that in Ciudad Guayana, Bolivar’s largest city, “it’s common for people to purchase real estate or expensive assets, such as vehicles or high volumes of merchandise” using gold.[4]

To be clear, these gold-based transactions are not state sanctioned and generally not made with anything as refined and cultivated as American Eagles or . But that’s part of the point. The intrinsic value of gold is so significant and universally appreciated that, even in its least refined condition, the metal can be viewed as preferable to fiat currency.

My View: All Fiat Currency Regimes – Even Ours – Can Be Dangerously Mismanaged

The hyperinflation in Venezuela that is driving citizens and businesses to embrace gold and foreign currencies has been caused by completely unrestrained money-printing. As is typically the case with hyperinflation, the country at issue tends to try to money-print its way out of crises that frequently are the natural consequences of highly questionable sociopolitical decisions.

The real root of the problem in Venezuela are efforts by the country’s three most recent presidents – and most notably the late Hugo Chavez – to nationalize a number of key industries, including the supremely valuable oil industry. Nationalization has led to mismanagement of oil industry resources, which has proved catastrophic to not only the oil industry itself but the Venezuelan economy that’s built almost exclusively on oil.[5]

And, as those profits have evaporated, the state’s “solution” has been to continue checking economic common sense at the door and make up the shortfall by simply printing as much money as it can as fast as it can. The result? Hyperinflation, of course. Venezuelans have had to deal with hyperinflation for more than four years now, and the problem remains relentless. The International Monetary Fund (IMF) projects Venezuela’s inflation rate at the end of 2021 will be 5,500%.[6]

No, America is not Venezuela. But all countries that use fiat currency – which is virtually all countries, period – possess the capacity to mismanage that currency and send the prices of all goods soaring. Often, that mismanagement arises as a function of political ideology. It’s easy to see how that played out in Venezuela. And it’s not difficult to see the potential for it to play out that way in the U.S., as well.

The money supply in the U.S. – fueled largely by COVID “fixes” and social engineering whims – has grown at a jaw-dropping rate over the past couple of years. Between December 2019 and August 2021, the M2 amount of money increased by $5.5 trillion. That’s a near-36% growth in the money supply over a mere year and a half! And economists John Greenwood and Steve Hanke anticipate another 5.1 trillion dollars to be infused into the money supply by the end of 2024.[7]

So an estimated 10.6 trillion dollars of newly created money will enter the financial system in just five years. But here’s the punchline: Greenwood and Hanke project real GDP growth will dispose of 1.4 trillion of those dollars during this period and we’ll see another 1 trillion in money demand. This means, of the 10.6 trillion dollars in new money being pumped into the cash supply, just 2.4 trillion – 22% – of it will leave. The rest of it? The rest of it will stay put and, in doing so, usher in a new era of chronic inflation in America, overseen by President Biden, Federal Reserve Chairman Jerome Powell and U.S. Treasury Secretary Janet Yellen.[8]

Again, it’s important to recognize that high inflation – even hyperinflation – is a potential risk in any economy where fiat currency is a feature. Whether runaway inflation actually becomes a problem will have a great deal to do with a nation’s political direction and agenda. That’s because the politics of a country tend to ultimately shape how its currency is managed.

And should America’s currency stability continue to be put at risk by political interests, the welfare of the nation’s most financially vulnerable populations is potentially in the greatest jeopardy. Retirees typically face an outsized inflation problem during periods when general price increases are reflected throughout the broad economy. This is due not only to the fact retirees are no longer earning an income but also to the reality that the prices of goods and services unique to seniors tend to climb more vigorously than the overall inflation rate. For example, while the current year-over-year inflation rate is 6.2%, 2022 Medicare Part B premiums will rise by a record 14.5%.[9]

Should American retirees and retirement-age investors prepare now to use gold and silver to buy goods and services in their local economies? I’m not saying that could never happen, but that’s not why I made a point of Venezuela this week. I made a point of Venezuela to demonstrate how easy it is for changing political winds to marginalize and eventually eliminate democracies and ruin their economies.

I also made a point of Venezuela to show that when these events do come to pass and the prices of all goods increase exponentially, the population sooner or later will look to real assets such as gold for relief.

If you are a retiree and/or retirement-age investor, let me be blunt: You’re too old to take chances with inflation at any level. If you don’t have an inflation-defense strategy in place yet, it’s time to get one. As you surely know by now, one effective component of such a strategy can be to include precious metals among your assets. If you need help with that, don’t hesitate to give Augusta Precious Metals a call.

Calling Augusta Precious Metals support team at 800-700-1008 puts you in touch with friendly, knowledgeable professionals who can answer all your questions about adding – or adding more – physical gold and silver to your personal base of assets.

You’ll receive a free guide just for calling. And you’ll have an opportunity to find about Augusta’s one-of-a-kind free live web conference. This presentation is like no other in the precious metals industry: An informative – even shocking, at times – look at just how America’s longstanding political and financial system makes it so difficult for retirement savers to achieve financial independence and security.

But that’s not all. Designed by Augusta’s on-staff Harvard-trained economist and hosted by a member of Augusta’s education department, this personal one-on-one webinar also details how physical precious metals have the potential to free your portfolio from the government and Federal Reserve shackles that keep so many Americans from achieving real financial freedom.

In a world where governments and central banks seem to not be able to help themselves, retirement savers must take meaningful steps to protect themselves. Call Augusta today.