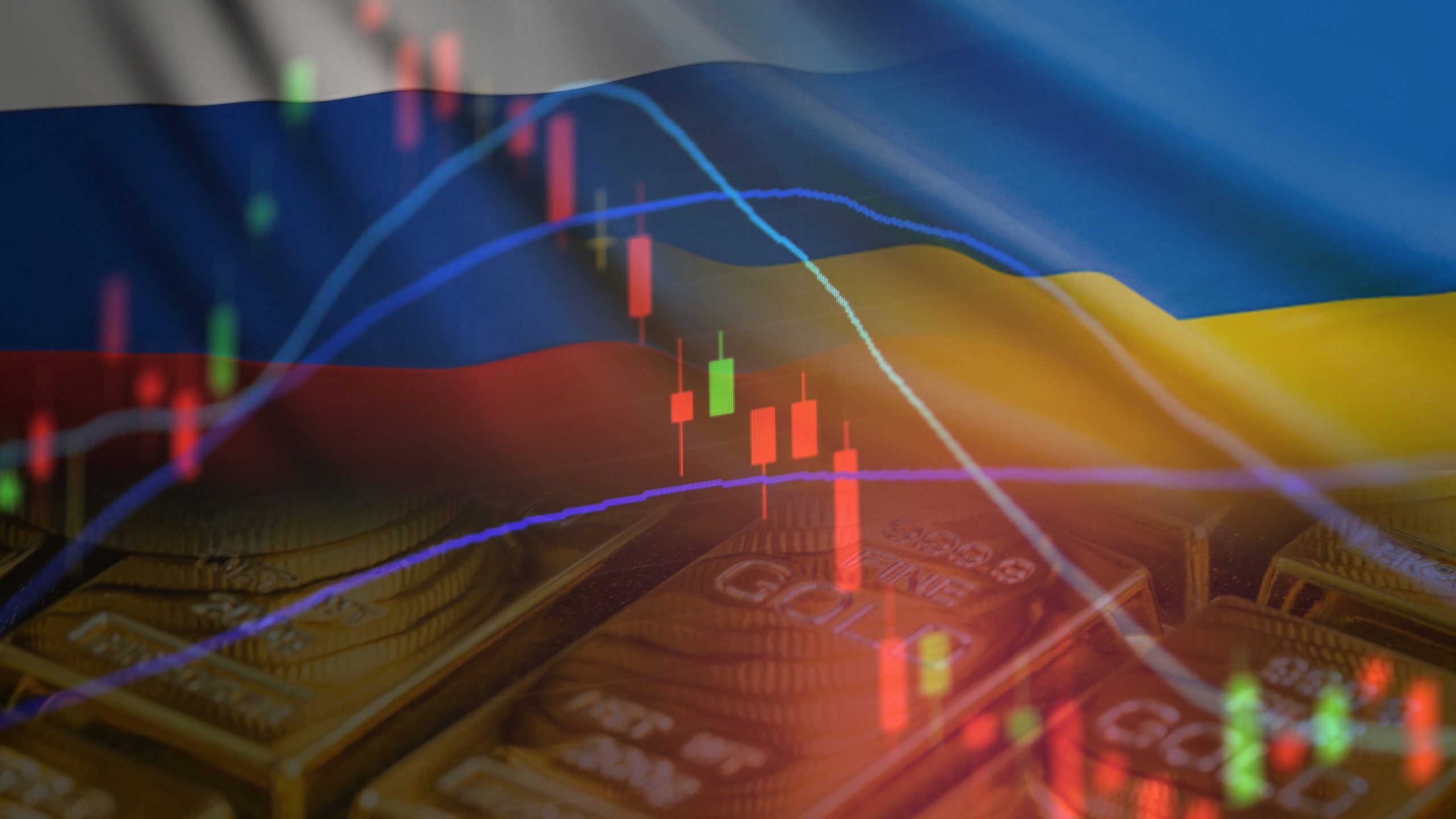 I won’t be surprised if you say you’ve been hearing more about gold on your favorite financial news channels in recent weeks.

After a solid 2020 that saw the metal climb 25%, gold’s 2021 performance was nothing to write home about (-3%). But, so far in 2022, the price of gold has done what many would expect it to do against a backdrop of geopolitical conflict and soaring inflation (now at 7.9%): Jump.

And it has done just that. Tuesday gold crossed above the 2,000-dollar mark for the first time since August 2020, falling just short of its all-time high. Since the beginning of February – just five weeks ago – gold has climbed roughly 14%.

Experts say that the principal energy behind gold’s recent price surge has been Russia’s invasion of Ukraine – but they also say renewed fears of stagflation are providing additional buoyancy to the metal’s price.[1]

Last week I detailed analyst projections that said the jump in gold we’re witnessing now could be rather fleeting. Those projections mostly focused on the part of the price spike attributable to the ongoing Russia-Ukraine war, and the analysts noted that such price spikes have a tendency to last only as long as the geopolitical tension itself lasts.

The suggestion they were making is that the Russia-Ukraine faceoff would be resolved in relatively short order and that the price of gold would return to earth.

But what if things are different this time around and gold’s geopolitical risk premium proves lasting? Pierre Lassonde, chairman emeritus of mining company Franco-Nevada and CEO of Firelight Investments, believes the Russia-Ukraine hostilities are fast becoming a protracted conflict. And now U.S. intelligence analysts are saying the same thing.

Lassonde says that if there are sustained troubles in Eastern Europe and high inflation remains a problem, we should look for gold to climb well into record territory over the coming years.

How high does he think gold might go? Wait until I tell you.

Intelligence Analysts: Russia-Ukraine to Persist for an Extended Period

Before I discuss Lassonde’s gold price projections, let’s talk more about his reasons for those price targets. Among them: his growing belief that the Russia-Ukraine war could last for an extended period.

In a recent conversation with Kitco News’ Michelle Makori, Lassonde – a 50-year veteran of the mining industry – noted that he thinks Russia President Valdimir Putin may have bitten off a little more than he can chew with his invasion of Ukraine.

“I think that Mr. Putin calculated that this was going to be an easy, quick win for him, to just roll into Ukraine and essentially put Humpty Dumpty back together, which was what he was trying to do,” Lassonde said. “His plans are not turning out exactly as he had wished. With the Germans now changing tack and saying, ‘We’re going to provide military help,’ that has changed the possible outcome of this war quite dramatically.”[2]

Lassonde may be on to something. Aside from the possibility that outside assistance could complicate things for Putin, there’s growing evidence that Moscow may have underestimated Ukrainian resolve in defending its country.

U.S. intelligence agencies now are saying that as many as 4,000 Russian soldiers could have been killed since the invasion began two weeks ago. That would be considerably more than the number of Americans (roughly 2,500) killed in the war in Afghanistan – which lasted 20 years. According to Director of National Intelligence Avril Haines, intelligence analysts already are anticipating an extended conflict characterized by a “persistent and significant insurgency” conducted by Ukrainian forces.[3]

Now let’s talk about the “economics” of Russia’s invasion of Ukraine. The possibility of an extended conflict in Eastern Europe necessarily raises the prospect of soaring oil prices that, in turn, likely would exacerbate inflation. And high, ongoing levels of inflation could provide significant momentum to gold.

Lassonde connected those dots in his conversation with Makori, and also explained why he thinks the Federal Reserve ultimately can do little about reining inflation in.

“The longer it [war] lasts, the more profound the impact is going to be, particularly on the energy market,” Lassonde told Makori. Indeed, Russia is the third-largest oil producer in the world and the biggest exporter of oil to global markets.[4]

Lassonde noted the significant impact that sharply higher energy prices can have on broader inflation and the global economy and suggested we could be “looking at $200 oil.”

And his outlook for gold prices against this backdrop? Lassonde is very bullish on the metal, saying problematic levels of inflation are here to stay because there’s no way in his view the Federal Reserve can hike rates to a meaningful degree without tanking the economy. The upshot, Lassonde said, will be gold-friendly negative real interest rates that persist for years.

“The Fed is in a box,” said Lassonde. “They cannot raise interest rates more than 1.5% without putting the economy back in the toilet. They have nowhere to go. Mr. Powell has to feel like a porcupine in a balloon factory. It doesn’t matter because the real rate of interest, which is what really matters to gold, is going to stay deeply negative for the next four years, which is exactly what happened in the 1970s.”

So where does Lassonde think gold is headed amid all of the strife he thinks we could see? Medium-term, he sees the price of gold moving up to 2,400 dollars per ounce. And longer-term, which he defines as the next five years, Lassonde foresees gold as high as 10,000 dollars per ounce.

My View: Forget the Dramatic Price Predictions but Pay Attention to the Rationale

When reputable analysts make highly optimistic price projections about gold or silver, it’s understandable to get excited about those numbers. But, because no one knows for sure where prices will go, I would suggest you might be better served by setting aside the price predictions and pay more attention to the underlying rationale.

In the case of Lassonde’s prediction, two elements of his analysis stand out to me. One is his contention that the central bank is in a real bind if it tries to raise interest rates to any substantial degree. In a previous piece, I discussed data that showed how meaningful increases in the Federal Funds rate amid inflationary environments invariably were followed by recession.

Something else Lassonde is saying that’s interesting to me is his assessment that the conflict between Russia and Ukraine could go on much longer than many may have considered, which is a possibility that U.S. intelligence analysts now are raising. If that happens, I think it’s reasonable to consider we could see the associated effects on oil prices and inflation that he insists will come to pass – as well as the strengthening of gold he foresees (if not the specific prices he’s projecting).

Are You Thinking About Adding Gold – or Silver – to Your Savings Assets?

If Lassonde’s rationale for higher gold prices makes sense to you – even if you’re not sold on specific numbers – you might at least be ready to have a conversation about possibly adding gold, silver or both to your current holdings. But who do you have the conversation with?

There are a lot of possibilities. But if I may, let me suggest a company that has received thousands of five-star reviews across consumer and business ratings sites and has had ZERO complaints at the Better Business Bureau and Business Consumer Alliance since opening its doors in 2012: Augusta Precious Metals.

When you call the Augusta support team at 800-700-1008, you’ll get to have the kind of conversation about precious metals that you likely hope you’ll have but have feared you won’t: a relaxed, enjoyable, no-pressure chat about metals and how they potentially can help hedge your nest egg against the kind of uncertainty we’re seeing play out right now.

Not only will you get to have an enjoyable conversation about gold and silver when you call, you also will receive a free information-packed guide. That’s not all.

During your conversation with an Augusta customer success agent, you’ll find out about our live one-on-one web conference about the economy and precious metals. It was prepared by the company’s on-staff, Harvard-trained economist, Devlyn Steele. In the web conference, you’ll learn why it can be challenging for retirement savers to prevail within the existing financial “system,” and how gold and silver can help put the odds of success on your side.

10,000-dollar gold does sound pretty exciting. But I’m not paying much attention to that, to be honest. It’s the logic underpinning that prediction I find interesting. If you find it interesting, as well, and you think it might be time to at least talk about including some gold and silver among your assets, give Augusta Precious Metals a call. We look forward to hearing from you.