The gold bull market appears to be taking a rest for the moment.

After a robust second quarter in which gold prices climbed 13%, the metal enjoyed an even better July, soaring another 13%. However, gold’s strong upward trend moderated a bit in August. Since the beginning of this month, gold prices have meandered around the 2,000-dollar-per-ounce level.

A break in the upward momentum is not surprising. You may remember from a previous Augusta article that Barry Dawes of Martin Place Securities said we should expect gold prices to take a breather. At that time, Dawes was looking for gold to engage in some consolidation (sideways movement) even as it continues its journey higher. Dawes said he believes none of the fundamentals justifying his 24-month gold price target of 3,500 dollars per ounce have changed.

Still, the metal’s flat performance so far in August has gold owners as well as prospective gold buyers asking this question: Is gold really just taking a break right now, or have we reached the end of this gold bull market? According to experts, the case for a continued march upward by gold prices remains strong in spite of the metal’s recent wobbles. As a matter of fact, seeing gold stumble just a little bit actually bodes well for its continued rise.

When any asset sharply surges toward the heavens, many observers quickly begin to take for granted an uninterrupted move upward. It’s as though the asset is supposed to move higher by leaps and bounds every day until it stops doing so entirely.

These sorts of jumps made without any breaks are not healthy for the continued prospects of an upward trend, however. The longer these surges go without any moderation, the likelier it is for the asset to become overvalued and poised for a sizable downfall.

Indeed, corrections and consolidations are natural companions of gold bull markets. A look back at gold’s epic rise during the 2008 financial crisis provides an excellent example.

As with the current gold and silver surge, the gold bull market 12 years ago was fueled largely by economic uncertainty. That uncertainty manifested in two specific and important ways for metals: Federal Reserve quantitative easing (QE) and then-record deficit spending by the government. The measures provided gold with a feast too enticing to pass up. From late 2008 – when the first round of QE was initiated – through mid-2011, gold soared 160%.

But an examination of the chart below reveals there were several periods during that move skyward when gold prices appeared inclined to retreat. From February to April of 2009, gold sank about 12% before resuming its general trend higher. From November 2009 to February 2010, gold again fell roughly 12%. Later in 2010, from June to July, gold prices slid backward about 8%. There are other points, as well, along the ’08 to ’11 run when gold tripped as it was moving steadily higher. 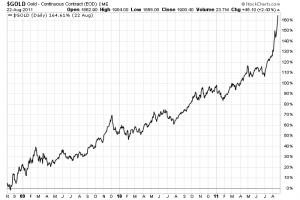 In addition to the corrections, you’ll notice numerous stretches of consolidation. January 2010 to April 2010 is one good example. During that period, the price of gold moved up and down inside of a relatively narrow trading range around 1,100 dollars per ounce. But gold’s overall trend higher remained unbroken. This is because the energy was rooted in immutable gold-favorable fundamentals – namely generous Fed and government policies. This is something Frank Holmes, CEO of U.S. Global Investors, notes about the current economic landscape as he acknowledges gold’s sideways movement at this time.

“It’s important to keep in mind…that the metal’s long-term drivers remain intact.” Holmes says. “We have unprecedented monetary and fiscal stimulus, with more potentially on the way. There’s still trillions of dollars’ worth of global government debt trading with a negative yield.”

Holmes also cites a very positive technical analysis (TA) indicator of gold’s continued prospects. In January 2019, gold formed what is known in TA as a “golden cross.” A golden cross occurs when the metal’s 50-day moving (price) average crosses above its 200-day moving average (MA). The golden cross is regarded as a bullish indicator. This is because the rise of a faster-moving MA above a slower-moving MA suggests strong momentum for an asset. As Holmes points out, gold is still trading in a golden cross 18 months after the pattern was formed. 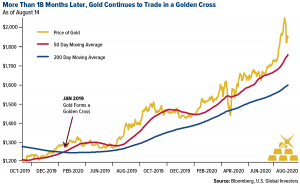 In a recent article at FX Empire, Ole Hansen, Head of Commodity Strategy at Saxo Bank, also acknowledged gold’s current consolidation. He did so while giving the prospect of a continued gold bull run his vote of confidence.

“Gold is now set to be engulfed in a battle between short-term technical traders looking to sell, as the steep uptrend is broken, and longer-term buyers who missed the first move above $2000/oz.,” Hansen said. Nevertheless, he added that “overall we maintain a bullish outlook for gold and silver with loose monetary and fiscal policies around the world supporting not only gold and silver but potentially also other mined commodities.” Hansen also believes the highly volatile U.S. election season and frazzled U.S.-China trade relations “are likely to add another layer of support through safe-haven demand.”

Recently, experts have cited 24-month-plus gold price targets of everywhere from 3,500 dollars per ounce to 10,000 dollars per ounce. Augusta Precious Metals’ senior economic analyst Devlyn Steele falls somewhere in between with his 36-month price projection. He sees gold prices at 5,000 dollars per ounce in three years, and also sees silver prices at 125 dollars per ounce by then. As with the other experts cited here, Steele suggests there’s much more to come for both gold and silver. In his opinion, this is “due to fears of dollar-debasing, inflationary Fed policy, as well as massive deficit spending.”

The message seems clear. Yes, the manic rise in the gold bull market has moderated recently. But every fundamental reason why gold prices looked good months ago still applies today. And professional observers all seem to agree on this: As long as those fundamentals persist, shorter-term downswings such as corrections and consolidations shouldn’t amount to anything more concerning for the metal.