Buying Gold Alert: CPI is on Fire! Is Hyperinflation Next? 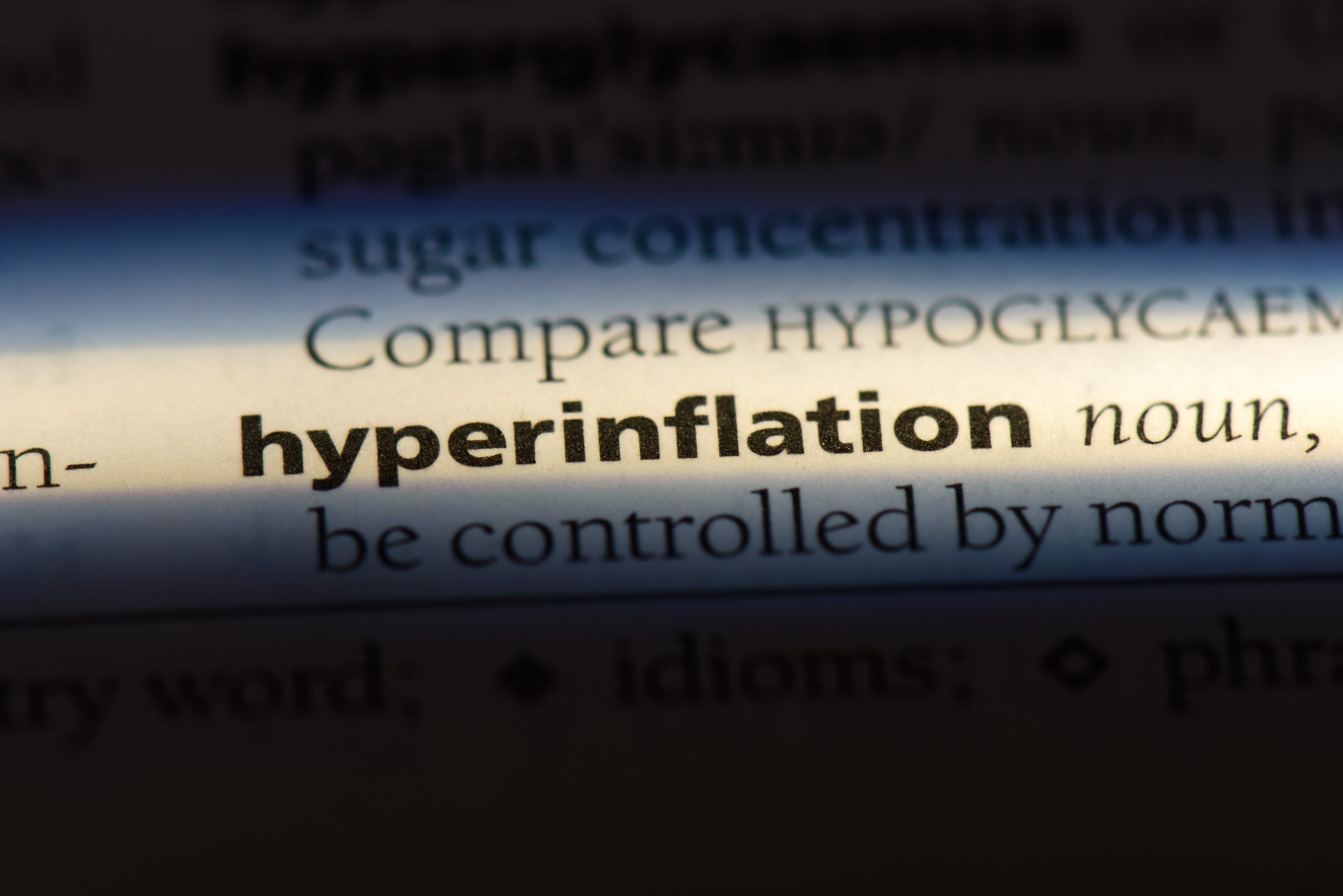 There no longer is any doubt inflation in the U.S. has made its triumphant return. Following 13 years without inflation rising much above the 0-2% range, the Consumer Price Index (CPI) seems to be making up for lost time. After April’s year-over-year CPI came in at a higher-than-expected 4.2%, upward price pressures have remained consistent and kept CPI at or above 5% from May through September.

Then today’s not-so-shocking shocker: The Bureau of Labor Statistics announced October’s year-over-year CPI was a whopping 6.2% – the biggest jump in more than 30 years and much higher than the 5.9% figure experts had anticipated.[1]

Even modest levels of inflation can wreak havoc on the purchasing power of hard-earned nest eggs over the course of many years. A relatively low chronic inflation rate of 3% can reduce the purchasing power of 500,000 dollars by nearly half over 20 years. If we adjust that rate of inflation upward to the 6% we now are at, that half-million dollars would shrink to barely 150 thousand dollars in buying power.

So now imagine this: the effect on one’s retirement savings of double-digit-or-higher inflation over that same period.

Are you one of those people who don’t think it can happen here in modern-day America? There’s a growing body of experts that would disagree with you. Proponents of this view include economists at one of the world’s largest banks. They believe the stunning and unprecedented commitments by the government to “anything goes” spending in the name of transformative social engineering are setting the stage for an inflation problem the likes of which we’ve not seen since 1920.

And they are no more forgiving of the Federal Reserve’s devotion to the unrestrained money-printing that enables that unfathomably expensive social-engineering effort. The inflationary effects of this on the prices of goods and services could be positively devastating – especially on one of the nation’s most at-risk demographics: seniors.

Plenty of people scoff at the notion that the U.S. could find itself beset by hyperinflation or even chronic double-digit inflation. And it still may be an unlikely possibility. But I don’t know that it is as remote as many would have us believe.

To appreciate the current runaway inflation threat to the U.S., I believe one has to be willing to acknowledge some differences that exist in how the electorate feels about the role government should play on behalf of its citizens.

In my opinion, people as a whole were more inclined generations ago to enjoy greater freedom and smaller government – which necessarily meant less government assistance. But now people wish to be cared for. We know this because they now vote for politicians who promise to expand the government safety net. President Biden’s agenda of social transformation demands trillions per year in annual deficit spending over the next decade and is projected to drive the national debt nearly 80% higher over the same period.[2]

Survey results provide additional evidence as to Americans’ changing views about the role of government in their lives. In January 2019, an Axios/Momentive poll revealed that roughly 39% of Americans viewed socialism favorably. When that survey was completed again in June of this year, the number had climbed to 41%. One piece of data from the most recent poll that I find particularly noteworthy is this: 56% of younger Republicans think the government should be doing more to reduce the so-called wealth gap. That figure is significantly higher from where it was just two years ago: 40%.[3]

And as Deutsche Bank makes clear in a bold special report, the government’s larger hand in the economy by way of its efforts at engineering greater social change could be key in bringing about problematic chronic inflation.

“U.S. macro policy and, indeed, the very role of government in the economy, is undergoing its biggest shift in direction in 40 years,” Deutsche Bank writes. “In turn we are concerned that it will bring about uncomfortable levels of inflation.”[4]

“Uncomfortable” could well prove to be an understatement. The last two fiscal years have seen the nation run budget deficits on par with the nation’s spending during World War II. In fact, the 2021 budget deficit is the second-largest (in terms of GDP) since 1945.[5]

We appreciate Deutsche Bank pointing out the dubious similarity of current deficit spending levels to those that occurred as a result of the effort to defeat Hitler and the Axis powers. The bank’s special report also points out a potential similarity in levels of inflation.

“While there are many significant differences between the pandemic and WWII,” Deutsche Bank says, “we would note that annual inflation was 8.4%, 14.6% and 7.7% in 1946, 1947 and 1948 after the economy normalized and pent-up demand was released.”

Scary stuff, but here’s why it could be worse: Post-pandemic inflation likely would be temporary; but the inflationary effects that could potentially result from the government’s massive expansion of the social safety net will remain.

Once you give people things, it’s very difficult to take them back.

I mean, just imagine trying to take away affordable child care, universal pre-K and paid leave for new parents once they’ve become part of the fabric of our society.[6]

Indeed. And human nature being what it is, it’s not unreasonable to assume the more you “give” to the people, the more they will expect.

But the risk of significant inflation in the U.S. is attributable to more than just unbridled government spending, something Deutsche Bank discusses in its report. The report’s authors lay a good deal of the blame for the runaway inflation threat on the stunningly accommodative monetary policy posture assumed by the Federal Reserve and its consequential effect on the money supply.

“Monetary stimulus has been equally breathtaking,” Deutsche Bank writes. “In numerical terms, the Fed’s balance sheet has almost doubled during the pandemic to nearly $8tn. That compares with the 2008 crisis when it only increased by a little more than $1t, and then increased another $2tn in the subsequent six years.”

In fact, economists John Greenwood and Steve Hanke point directly to the massive growth in the money supply over the last year as the reason why inflation is poised to explode. They are frustrated by the continued dismissals of current inflation as “transitory” by officials such as Federal Reserve Chairman Jerome Powell (America’s central bank leader) and U.S. Treasury Secretary Janet Yellen. Greenwood and Hanke say flatly that ‘inflation upticks aren’t temporary and were predictable, driven by an extraordinary explosion in the money supply.” (Our emphasis.) [7] 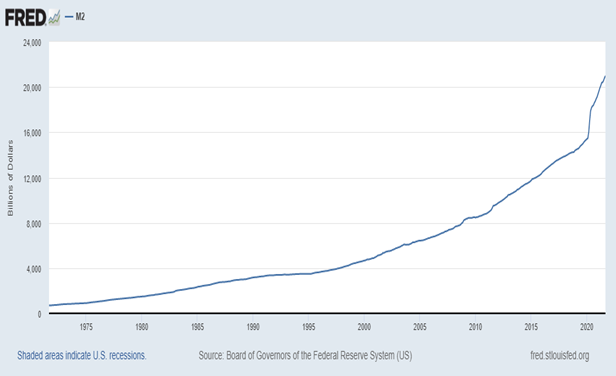 Noting that “the most basic laws of economics, the ones that have stood the test of time over a millennium, have not been suspended,” the Deutsche Bank report is not shy about painting a most troubling picture of what lies ahead if fiscal and monetary policy remain so relentlessly reckless:

An explosive growth in debt financed largely by central banks is likely to lead to higher inflation. We worry that the painful lessons of an inflationary past are being ignored by central bankers, either because they really believe that this time is different, or they have bought into a new paradigm that low interest rates are here to stay, or they are protecting their institutions by not trying to hold back a political steam roller.

…neglecting inflation leaves global economies sitting on a time bomb. It is a scary thought that just as inflation is being deprioritized, fiscal and monetary policy is being coordinated in ways the world has never seen. Recent stimulus has been extraordinary and economic forecasting, which is difficult at the best of times, is becoming harder by the day.

Rising prices will touch everyone. The effects could be devastating, particularly for the most vulnerable in society.

There’s little dispute that among society’s most vulnerable when it comes to runaway inflation are retirees and retirement-age investors. For starters, those who are retired are by definition no longer earning an income, so they will tend to be at an automatic disadvantage when prices rise.

But seniors’ vulnerability to inflation is not limited to that basic lifestyle fact. By virtue of their age, older Americans are uniquely positioned to face higher health care costs at a time when they’re least able to withstand them. And as it happens, health care inflation is consistently much higher than that of the overall economy. According to the Centers for Medicare and Medicaid Services, healthcare expenditures in 2018 increased by 4.6% while inflation in the form of general price increases averaged 2.4%.[8]

Making matters worse for seniors is the very real prospect that the “official” inflation numbers we receive courtesy of the Bureau of Labor Statistics in the form of CPI are understating the true inflation rate.

Years ago, the CPI was a true cost-of-goods index that measured the price of a fixed basket of goods over two different time periods. Now it is a cost-of-living index that allows for substitutions many believe result in a misleading CPI number. Popular alt-financial site ShadowStats pegs the “real” inflation rate using pre-1980s CPI methodology at a little more than 13%.[9] A persistent “real” inflation rate of 13% – likely to get worse – could have a potentially catastrophic effect on the financial security of seniors.

So if you ARE a senior or someone who’s fast approaching his or her senior years, I hope you’re paying close attention. “Official” inflation numbers are getting worse, which means real inflation – and particularly real inflation for older citizens – is about to become “devastating,” as Deutsche Bank says.

Solutions? They do exist, but you have to know where to look. That can include looking outside of mainstream assets and the traditional financial system. If you do that, you’ll find physical precious metals, which have a demonstrated record of thriving when inflation runs well ahead of interest rates, which is happening right now.

If you don’t know much about buying gold and silver as investable assets, however, you may feel like a fish out of water. Augusta Precious Metals can help. We’ve assisted thousands of retirement investors over the years in better protecting their hard-earned nest eggs using physical gold and silver.

When you call the professional Augusta support team at 800-700-1008, you’ll receive a free guide. Not only that, you’ll have the chance to find out about our live one-on-one web conference hosted by a member of Augusta’s education department – also free. This presentation has helped numerous retirement investors understand how the prevailing economic and political system makes it difficult to achieve true financial freedom. It also shows them how buying gold and silver can go a long way to ultimately achieving that freedom in spite of the challenges presented by the system.

Thanks to unchecked government spending and a staggering growth in the money supply courtesy of the Federal Reserve, inflation is upon us – now more than 6% and poised to keep rising. Is hyperinflation next? Time to call Augusta.