Analysts: Global Economic Uncertainty Is Rising – and Poised to Last

I read a great article the other day. In fact, I like it so much that I’m going to use my time this week to discuss it with you.

The article appears at the website of the Harvard Business Review and is written by a Stanford economics professor and two staff members at the International Monetary Fund. Called Visualizing the Rise of Global Economic Uncertainty, the article – as the title clearly suggests – addresses the recent surge in worldwide economic uncertainty.

The piece looks at uncertainty in terms of the risks it poses to companies. The authors conclude the article with recommendations for how companies can more readily prepare for and adapt to these risks. This is an article written for the Harvard Business Review, after all.

However, the foundational point they make is every bit as relevant to retirement savers as it is to companies, in my view: Heightened levels of economic and geopolitical uncertainty are here – and likely here to stay. In the case of retirement savers, this uncertainty has the capacity to negatively impact the value of IRAs, 401(k)s and other tax-advantaged retirement plans through the generation of greater volatility.

Fully understanding the nature of this uncertainty is one challenge for retirement savers. It’s a challenge because of how easy it can be to mistake a symptom of uncertainty for uncertainty itself.

Take inflation, higher interest rates and even recession, for example. At first glance, they may seem like textbook examples of economic uncertainty. What they really are, however, are symptoms of uncertainty.

The inflation we’ve been wrestling with for well over a year – and now the rate hikes being initiated to try to pin that inflation to the mat – ultimately are a function of the global pandemic. It was the onset of the pandemic that prompted the massive expansion of money supplies by central banks and presented significant challenges to the functionality of supply chains. The war in Ukraine has been another root cause of global economic uncertainty, catalyzing a variety of economic impacts felt by businesses and consumers.

Global health crises, war and political upheaval are just some of the underlying energy sources of economic upheaval. And as nations work to stay on an even keel throughout the evolution of these events, they will do so by implementing fiscal and monetary policy measures that can create volatile conditions for the holdings of retirement savers.

Once retirement savers grasp the nature of uncertainty, the other challenge they face is deciding how best to deal with it.

There are a variety of strategies savers might consider in an effort to try to mitigate uncertainty’s impact. Among them may be the acquisition of certain alternative assets regarded as safe havens and stores of value – assets with the potential to strengthen during periods of uncertainty. In my opinion, gold is one of the best examples of such an asset. We’re going to see why in just a bit.

Before we do that, however, let’s take a closer look at the referenced article with an eye to understanding why it appears global economic uncertainty is on the rise and why there’s reason to believe it could persist for many years to come.

In Visualizing the Rise of Global Economic Uncertainty, the authors pay particular attention to the rise in uncertainty since 2016. They identify five “uncertainty shocks,” specifically: Brexit in 2016, the U.S. presidential election that same year, the marked escalation in trade tensions between the U.S. and China that began in 2018, the global pandemic, and the war in Ukraine.[1]

Below is a representation of the World Uncertainty Index – stretching back more than three decades – replicated in greater detail by the article’s authors. To their point, uncertainty, overall, has remained elevated well above the “normal” range since 2016. 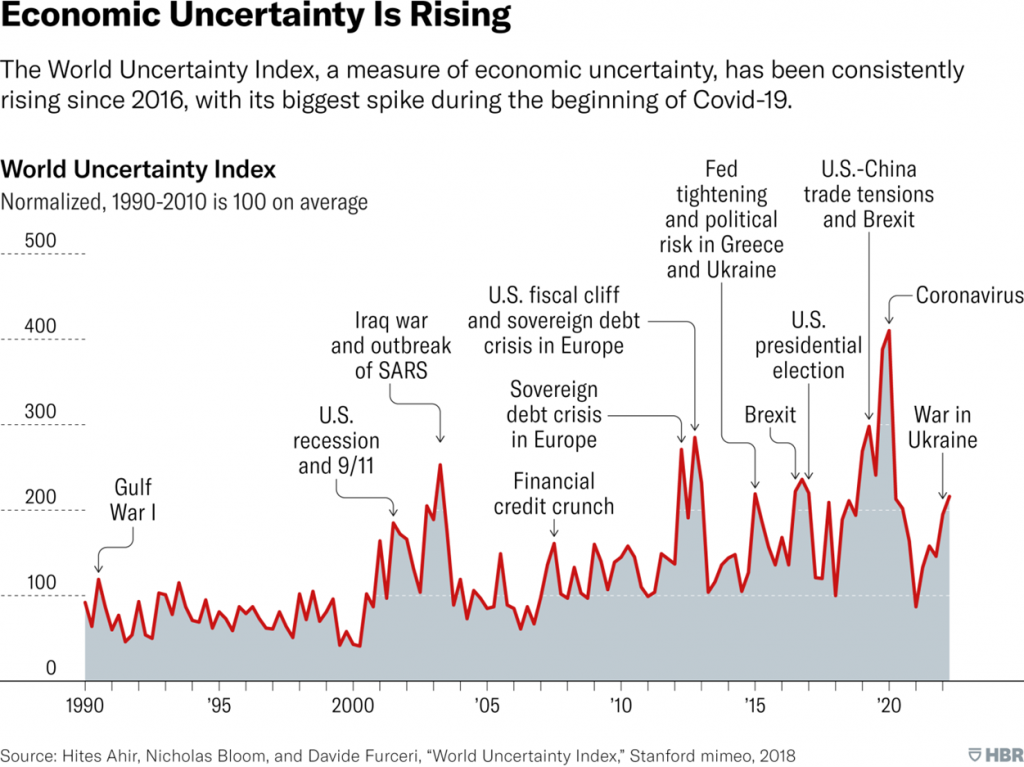 As for the reasons why “uncertainty shocks” – along with the more unsettled overall climate that results from those shocks – are becoming more pervasive, the authors point to a trend of “domestic and international political fragmentation.”[2] But just as important as the identification of these roots causes of uncertainty is the authors’ firm belief that this uncertainty is already woven into the fabric of the global economic order – meaning, it’s not going anywhere:

These global shocks are here to stay. While each event is different, the common theme is greater geo-economic fragmentation and more polarized politics in the U.S. and Europe. These trends are powering the rise in global uncertainty and they are not going away.[3]

Such assessments make particular sense in light of the trend away from globalization we’re starting to see. You may recall that I wrote about this movement recently in an article discussing the possibility that higher inflation will remain even after acutely high inflation moderates.

Economists maintain that increased globalization has served to put downward pressure on prices around the world. It’s not difficult to see what that is. As nations have come to enjoy greater and easier access to one another, the intensification of competition that’s a natural result of that access has yielded a beneficial effect on prices for goods and services. However, globalization now is becoming increasingly out of fashion.[4] As that trend continues, it’s likely that chronic – even structural – inflation will become prevalent.

That’s just one way global economic uncertainty might yield a negative economic consequence. For those retirement savers who accept the idea that this greater uncertainty will be reality going forward, the next consideration is what to do about it. Perhaps a clue to that end can be found in the performance of one particular asset over the last couple of decades – a period throughout which “macro” uncertainty clearly has been on the rise.

Gold Has Shone Brightly Since the Beginning of the Millennium

The pronounced rise in global uncertainty over the last half-decade or so is unmistakable. But a careful review of the previous graphic over the entire represented period reveals there actually has been a general trend upward in uncertainty since the beginning of the millennium.

In fact, a close look at the chart reveals a fairly sizable uptick in uncertainty during the year 2000. Although there is no notation about that made on the chart directly, we know the seeds of the 2001 recession were partly sewn during 2000. March of 2000 represented the peak of the technology bubble for that period.[5] Its deflation was helped along by a Fed rate-tightening regime that began in 1999 and persisted through 2000.[6] Notable, too, is the fact that quarterly U.S. GDP contracted in the third quarter of 2000 on an annual basis.[7]

The point is that the momentum toward increased global economic uncertainty was building in a material way beginning in 2000 and moving into 2001. And as it turns out – not so coincidentally, I would suggest – it was at that time gold began an impressive climb that continues to this day. 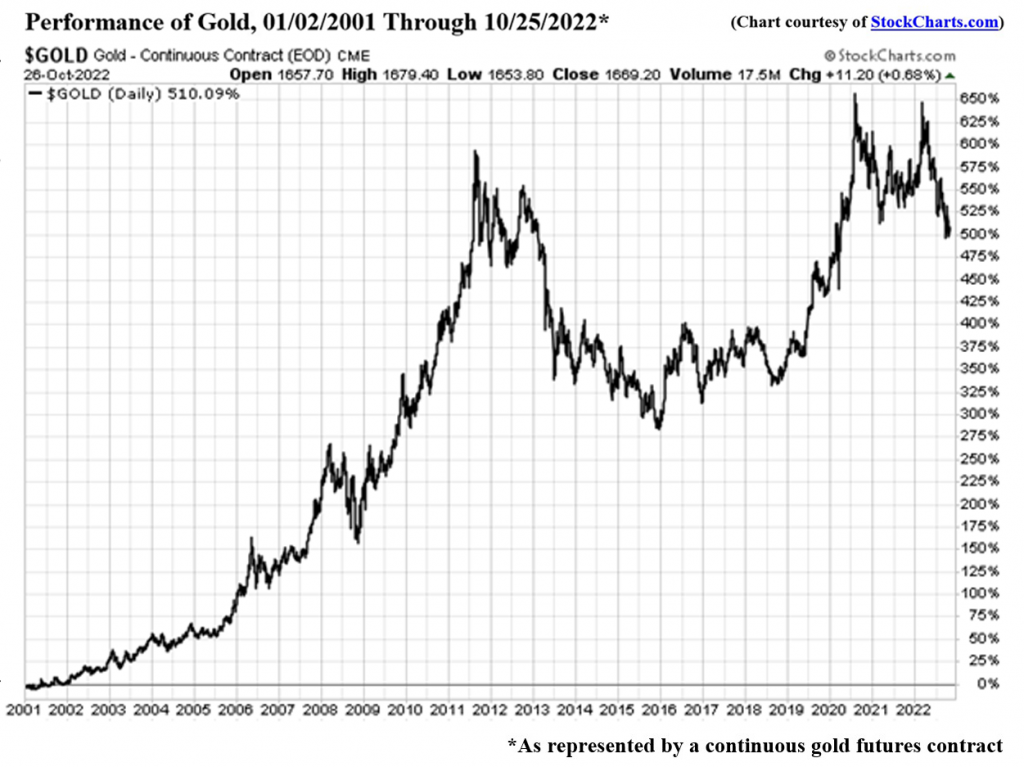 Gold is criticized at times on the basis of its long-term record of appreciation. And there have been extended periods of time over which gold’s performance has been underwhelming. But you cannot say that’s been the case from 2001 through today, a period during which there has been a demonstrable increase in global economic uncertainty. And as consensus opinion builds in support of the idea that greater uncertainty, overall, will be a feature of the worldwide economic environment going forward, it’s worth it for retirement savers to consider the possibility that gold will continue to thrive, even as there is no guarantee it will do so.

Bridgewater CIO: Gold Can Help Mitigate the Impact of “So Much Boiling Conflict”

It’s worth noting that concerns about global economic uncertainty have been building for some time among asset managers and analysts. Also growing among some of those professionals is the belief that owning gold is a smart way to help mitigate the impact of that uncertainty.

On that note, I’m reminded of Greg Jensen, co-CIO of world’s-largest-hedge-fund Bridgewater Associates, making a somber recommendation in favor of gold back in early 2020 on the basis that – in his view – the world was poised to see greater general upheaval going forward. “There is so much boiling conflict,” Jensen said at the time. “People should be prepared for a much wider range of potentially more volatile set of circumstances than we are mostly accustomed to.”[8]

More recently, as a guest of The Northern Miner podcast, Jeffrey Christian of commodities research firm CPM Group recalled his firm’s projection back in 2000 of greater global uncertainty – as well as their recommendation to buy gold on that basis:

In November of 2000 we issued a “buy” recommendation [for gold]. We said, “We think that the next several decades will be more stressful economically and politically…than 1978, ’79 and ’80, and we think the gold price will blow past $850 and stay high for a long time.”

Now that was 22 years ago. The reality is that we’re 22 years into a period of greater uncertainty politically, economically…we are in a turbulent period of time with great uncertainty, and a lot of things are changing. And this is going to continue for decades to come.[9]

The fact is you don’t have to go very far to find credible observers of the global economy who see greater uncertainty prevailing through at least the foreseeable future. To be sure, not all of them will embrace gold as one way to potentially reduce the impact of that uncertainty. Some certainly will, however. And for retirement savers who themselves anticipate a higher degree of global economic uncertainty in the future, including gold among their holdings may provide the peace of mind that might otherwise prove more elusive in the years ahead.