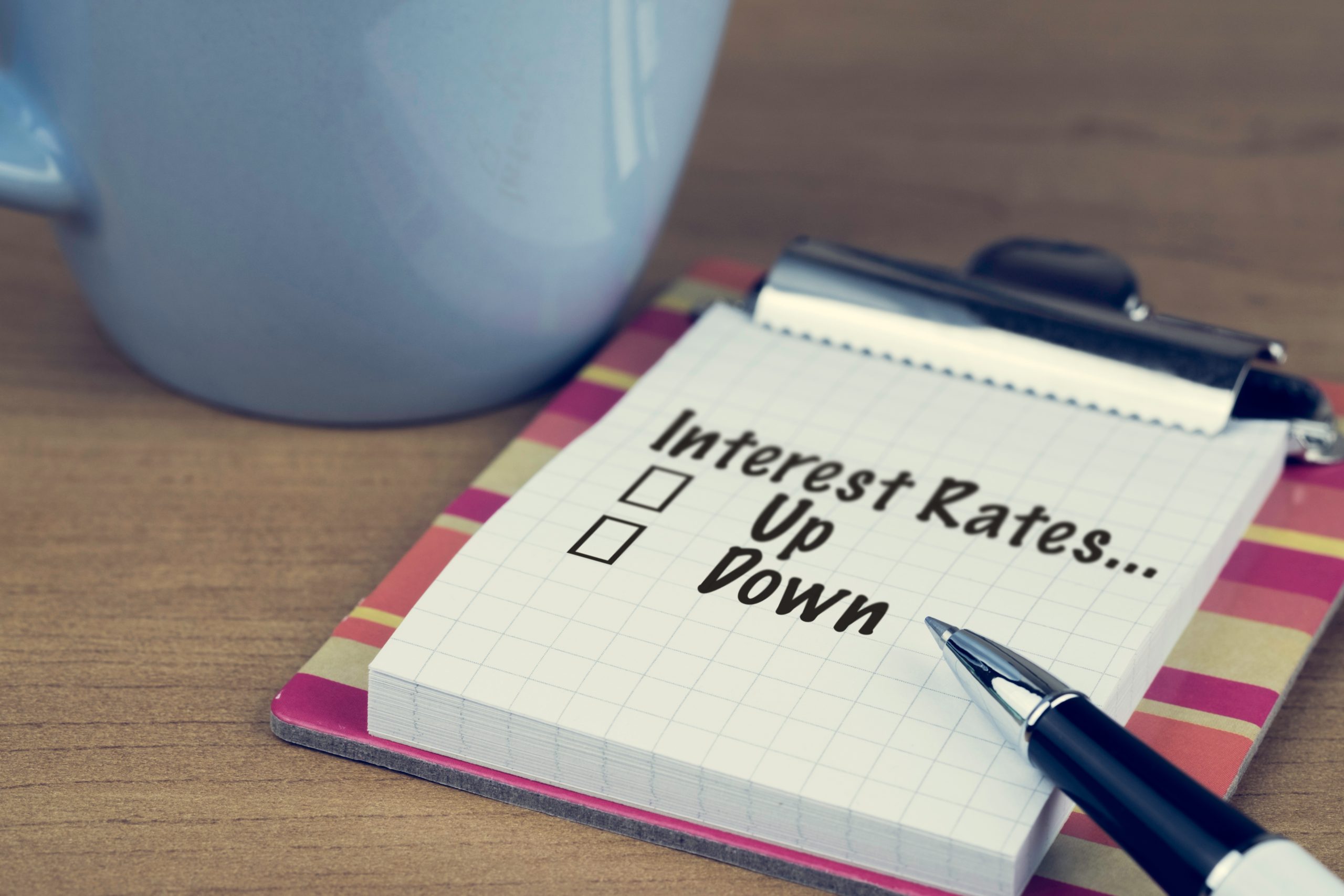 I wrote an article last week that highlighted the thoughts of two economists as to why the Federal Reserve will have a tough time raising interest rates. I invite you to read the article for yourself, but essentially what these gentlemen – among others – say is that so much of the economy’s well-being relies on the continued extraordinary valuations of equities and real estate that the Fed cannot meaningfully raise interest rates to rein inflation in.

But let’s say the Fed’s changes in outlook remain intact and high inflation forces the central bank to follow through on what it’s now saying it will do: make a sincere effort at corralling inflation – now at a 40-year-high of 7% – with higher interest rates. What really could the fallout be to the financial market and broader economy if the Fed steps in to contain higher prices?

One of the economists I cited in my previous piece, David Rosenberg, projected significant losses among mainstream assets even if the central bank is no more aggressive than to move the Federal Funds rate up to just 1.75% – the Fed’s target – by the end of 2023. According to Rosenberg, equities and real estate could take hits to the tune of 30% and 20%, respectively. Such losses would be in keeping with the kinds of downturns in stocks and real estate that coincide with recessions.

Indeed, says Michael Kramer of Mott Capital Management, Americans should be on the lookout for a recession to set in if the Fed aggressively pursues inflation with rate hikes. In a recent article for Investing.com, Kramer connected the dots to show how historical Federal Funds rate increases initiated to bring down high inflation always have been a catalyst of recession.

His illustration has great implications for retirement investors and precious metals alike, in my view. For retirement investors, significant negative consequences potentially lurk regardless of whether the Fed raises interest rates or not. Unchecked inflation running at a high level for years will erode the purchasing power of hard-earned savings, while recessionary conditions would threaten the nominal value of retirement portfolios.

Sounds pretty grim, but, as precious metals owners know, there is a silver lining to the cloud. Each of the distressed economic conditions could prove beneficial. Inflation allowed to run free likely will prompt gold and silver to strengthen, particularly given the degree to which real interest rates would toil in negative territory. And should a recession unfold on the heels of aggressive Fed rate hikes, it’s reasonable to consider the resulting turmoil would trigger metals’ safe-haven properties, sparking an increase in the price of both gold and silver. We know this because of the way they have reacted before to similar circumstances.

President Biden said at the beginning of last month that the U.S. economy was in “strong shape,” but it’s clear that everyday Americans aren’t anywhere near as optimistic in their outlook as the nation’s chief executive is.[1] Consumer sentiment has been on the skids for months now, with January’s preliminary University of Michigan consumer sentiment index measure coming in at 68.8 – that’s the second-lowest figure for the index in a decade.[2]

And although the ongoing pandemic accounts for some of the pessimism, continually rising inflation clearly seems to be the bigger concern.

In assessing the results, survey director Richard Curtin noted that “inflationary erosion of living standards was the main explanation offered by these consumers” for their worsening personal financial outlook. “Nearly half of all consumers anticipated that the inflation rate would outdistance income increases to produce real income declines,” Curtin said, adding that “just 17% anticipated real income gains in 2022.”[3]

The erosion of living standards to which Curtin refers is a direct result of another erosive effect of inflation: the diminishment of purchasing power. As we know, a chronic loss of purchasing power can be particularly hard on retirees and retirement-age investors who are no longer in a position to help offset the effects by continuing to work.

But as it turns out, an aggressive pursuit of inflation in the form of interest rate increases also could create a nightmare for retirement investors by cuing the onset of a recession.

In his piece for Investing.com, Kramer details how – beginning in the stagflationary 1970s – recession has followed in each instance when the central bank sharply increased the Federal Funds rate with the intent to cut down inflation (see chart below).[4] 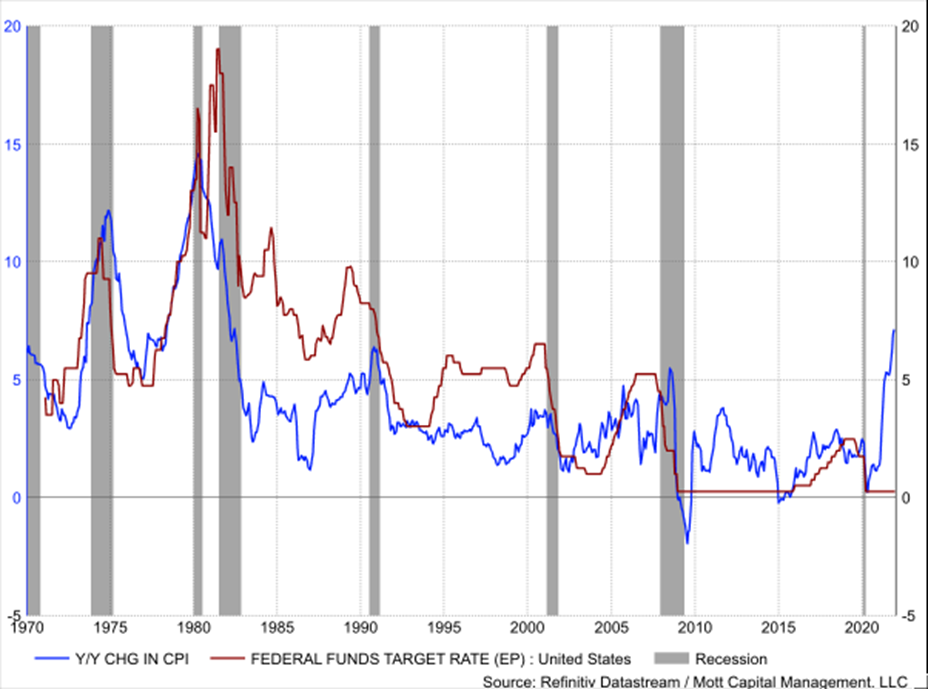 “In each case,” Kramer notes, “the combination of the higher Fed Funds rate and a high inflation rate has led the US economy to fall into recession. This time seems it will turn out the same, as the Fed is now on a quest to raise rates in 2022 and the markets are beginning to price in as many as four rate hikes.”

Esteemed economist Mohamed El-Erian, president of Queens’ College, Cambridge University and an advisor at German multinational financial services company Allianz, also thinks history serves as a roadmap to what will happen in the event of meaningful rate hikes. In an interview with Yahoo Finance earlier this month, El-Erian noted, “We haven’t had a situation in the past in which the Fed has been really late [with rate hikes] and the Fed hasn’t ended up tipping the economy into a recession.”[5]

Inflation or Recession: Gold and Silver Could Help Protect From the Effects of Each

So here are two very-possible scenarios awaiting retirement savers: The Fed does not raise interest rates, in which case chronically high inflation continues to be a significant problem and an effective resolution to that problem remains unclear. Or, the Fed does hike interest rates, which, in turn, increases the likelihood of recession. In the event of either outcome, the prudent retirement saver will want to be sure his or her portfolio is appropriately configured to withstand the possible fallout.

But what, exactly, is involved in helping to ensure the potential negative impacts to your savings from either high inflation or recession remain as small as possible?

My guess is that it’s the kind of question you’ve not spent much time considering up to this point. When traditional assets are soaring on the back of highly accommodative Federal Reserve policy, worrying about what happens if economic circumstances change seems almost like a distraction. But it’s not. In fact, having in place appropriate measures to mitigate – or even potentially entirely offset – the losses incurred among mainstream assets during adverse conditions can be essential to ensuring you have a chance to achieve your long-term financial objectives.

In my view, one of the savviest moves a retirement investor can make to protect his savings from the effects of either inflation or recession is to include among his holdings those assets universally regarded as safe havens – assets such as physical gold and silver.

As so-called alternative assets, however, it can sometimes be a challenge for investors to find the sound, straightforward information they seek to help decide if metals are right for them. Fortunately, no such challenge exists when they contact Augusta Precious Metals.

When you call Augusta at 800-700-1008, you’ll speak to a friendly, knowledgeable customer success agent who will patiently answer all of your inquiries about getting started with physical gold and silver. Our support team will make sure you receive a free guide packed with information about investing in precious metals.

You also will learn about Augusta’s unique one-on-one web conference designed by our director of education, Devlyn Steele. Steele, Augusta’s dedicated on-staff Harvard-trained economist, has created a truly one-of-a-kind presentation. It details not only why the prevailing financial system could short-circuit your efforts to achieve lasting retirement security but how including physical gold and silver among your holdings can help ensure those efforts ultimately are as successful as possible.

And let me be clear: You don’t have to be certain you’re ready to invest in physical metals when you call Augusta. We understand making changes to your retirement portfolio is a big decision. We’re not here to rush you and we won’t pressure you in any way. What we will do is give you all the information you need and want about precious metals and then – IF you decide that gold and/or silver investing is right for you – serve you as a highly rated provider of precious metals products and services.

So, what’s in store for American retirement investors with the Fed rate hike promise? Runaway inflation – or a recession? Whichever it is, wouldn’t it be nice to know your portfolio is protected with physical gold and silver? If you’re ready to learn more, don’t wait – call Augusta today.