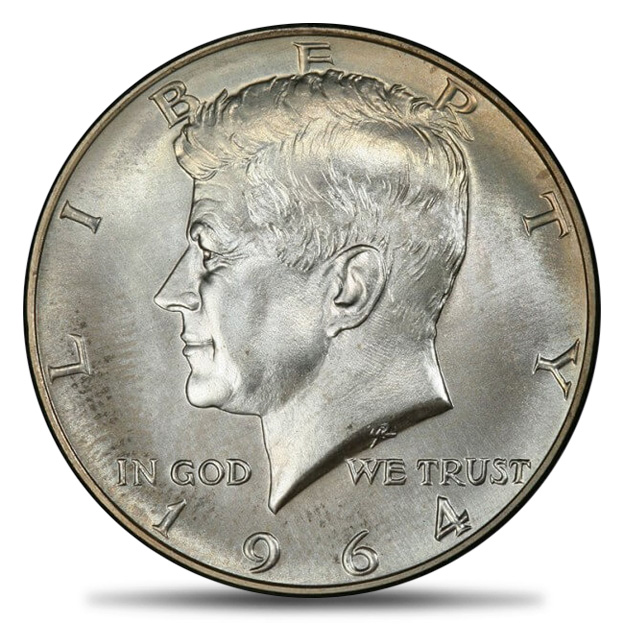 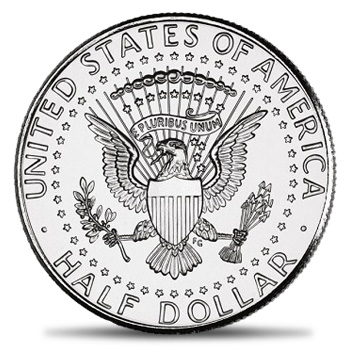 The obverse (front) of the silver Kennedy half dollar has a bust of President Kennedy surrounded “LIBERTY,” and “IN GOD WE TRUST” crosses his neckline. The issue date is at bottom, except for coins minted in 1975 and 1976, when “1776-1976” appeared to commemorate the U.S. bicentennial.The reverse has the Presidential Coat of Arms, which the United States Mint has used on various medals. The denomination is at bottom. But in 1975 and 1976, Kennedy half dollars were minted with Independence Hall, Philadelphia, on the reverse to commemorate the U.S. bicentennial. By the hall are “200 YEARS OF FREEDOM” and “E PLURIBUS UNUM.” “UNITED STATES OF AMERICA” and “HALF DOLLAR” follow the rim.

Kennedy half dollars have been minted with three metal alloys. In their first minting, they were 90% silver – the last 90% silver coin to be circulated by the United States. From 1965-1970, Kennedy half dollars were silver clad, and this was also true of the 1975-1976 bicentennial Kennedy half dollars. Later Kennedys contain no silver at all.Mint marks occur at two separate locations, depending on issue date. From 1964-67, the mark is above the “L” in “HALF” on the reverse. Afterward, it was moved below Kennedy’s bust on the obverse, below “W” in the motto.