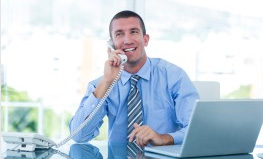 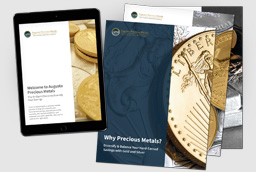 One of the reasons people purchase physical gold and silver for their retirement savings is because precious metals historically have been uncorrelated with other investments. In the past, gold has performed well, for example, during certain times when federal government and Federal Reserve actions and policies have resulted in a decline in the dollar’s purchasing power (inflation).

During inflationary times, those who owned physical gold and silver possessed an alternative asset that behaved differently from assets in other classes, and thus has been able to add diversified value to some Americans’ long-term savings.

If you look up "fiat money" in the Americans’ Heritage Dictionary of the English Language (online), you’ll see the following definition:

"Legal tender, especially paper currency, authorized by a government but not based on or convertible into gold or silver."

This definition reveals the true nature of fiat currency. For one thing, it tells us that paper currency enjoys legitimacy by mandate of the government.

The other related message is that fiat currency can be understood to have less intrinsic value because it is “not based on or convertible into gold or silver” which are tangible items whose value is never worth zero precisely because they have intrinsic value.

It is this characteristic of fiat currency – a lack of tethering to physical gold and silver– that sits at the heart of what could be an obstacle to long-term financial security for some: inflation-based devaluing of the dollars in your retirement savings.

Our monetary system doesn’t demand that currency be tied to a store of value like gold or silver. Accordingly, government spending isn’t restrained by the amount of physical gold or silver in its possession. And the Federal Reserve is empowered to manipulate the money supply. In their effort to sustain the economy, both politicians and the Federal Reserve can – and do – take full advantage of this fiat characteristic of our currency to help them achieve their fiscal and monetary policy agendas.

A “gold standard” would mean the government could spend only what it raises in taxes and only borrow against the gold in its possession (as it used to before the gold standard was ended by President Nixon). A return to the gold standard also may render central banks obsolete for all practical purposes. After all, there may not be a need for “monetary policy” in a currency system that is bound by physical assets.

But that’s not how things are. Our fiat currency system has led to a great deal of deficit spending by the government, as well as monetary policy measures by the Federal Reserve, including quantitative easing, that may weaken the dollar. Investors savings accounts may be worth less as the value of the dollar drops in response to QE.

The chart below shows the shocking drop in the dollar’s value since 1913 – the year the Federal Reserve was created. 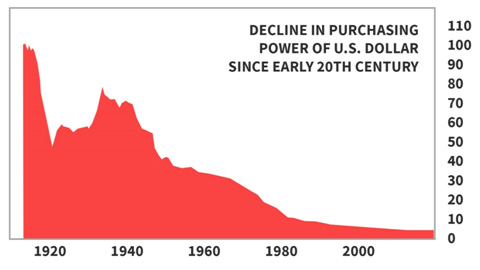 Even Alan Greenspan, perhaps the most recognizable name of all the Federal Reserve chairmen, understands the nature of this elasticity of money and the way manipulative monetary policies can devalue the savings of American citizens. He also says precious metals can be used by those citizens to stop the damage:

"Deficit spending is simply a scheme for the confiscation of wealth. Gold stands in the way of this insidious process. It stands as a protector of property rights."

Through history, gold and silver prices even have increased during challenging economic times. That’s why owning physical gold and silver is an important option for retirement savers that may circumvent inflation-based devaluing of their dollars.

In other words, to gain the potential of offseting losses resulting from a devaluing of the dollar, you can adopt for yourself the very gold standard rejected by the government.

Curious how this works? Would you like to harness gold and silver’s potential to hedge the declining value of the dollar for the benefit of your retirement savings? Speak with an Augusta Precious Metals customer success agent to learn more. Call us at 800-700-1008.