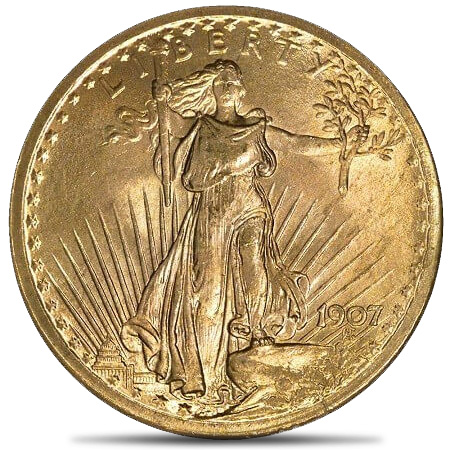 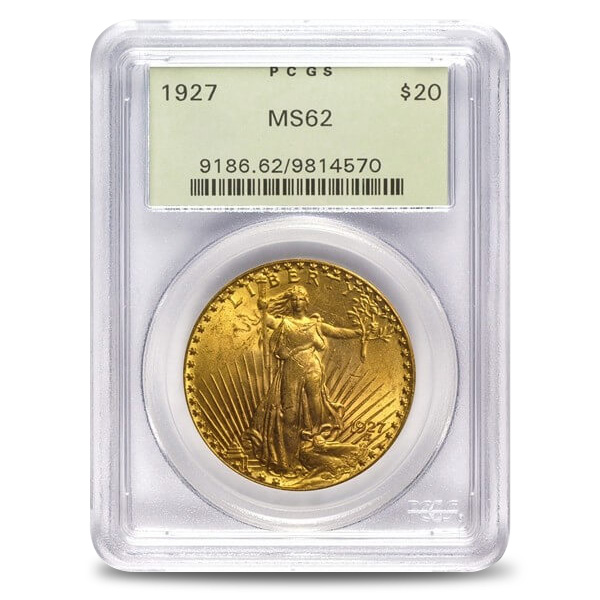 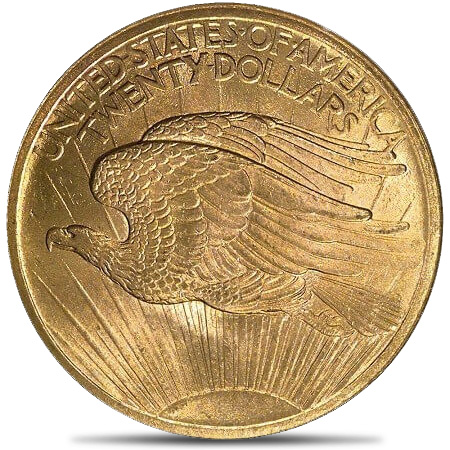 The Saint Gaudens gold coin is named for its designer, American sculptor Augustus Saint-Gaudens. Among coin collectors, it is often known as the “$20 Saint” or the “$20 St. Gaudens.”This $20 gold coin is the last-issued circulating U.S. gold coin and thought to be one of the most beautiful and rare.

President Teddy Roosevelt engaged his friend and prominent American sculptor Augustus Saint-Gaudens, to design new $20 and $10 gold coins to improve the artistic quality of American coinage.The obverse (front) shows Lady Liberty holding a staff and olive branch, walking out of the sun. “LIBERTY” arcs above her, and stars representing the number of states (46, 1907-11; 48, 1912-33) hug the rim. This design was so popular that the United States Mint used the same design for the modern American Eagle coins. To the right of “LIBERTY” is the date, which was cut in Roman numerals, “MCMVII,” on some 1907 coins.The reverse of the $20 Saint Gaudens has a bald eagle flying across the sun. “UNITED STATES OF AMERICA” and “TWENTY DOLLARS” span coin’s top. “IN GOD WE TRUST” is beneath the eagle, except for some coins minted in 1907 and early 1908.The first $20 Saint Gaudens were controversial because they omitted “In God We Trust,” in contrast to other U.S. gold coins minted in this period. President Roosevelt felt the motto disrespectful to God as the coins could be used in such places as bars, brothels and gambling establishments. But Congress interpreted Roosevelt’s decision as an attack on religion and passed an act adding the motto in mid-1908.

The first $20 Saint Gaudens were a trial, never intended for circulation. Only 16-22 of these were minted. Each was relatively thick and struck in ultra-high relief, looking more like a medal than a coin. These experimental pieces had a much higher relief than later issues and connected directly to the edge without a border, resulting in a very sharp appearance. Only a few of these coins are available today. Later in 1907 through 1933, they were struck in flat relief.